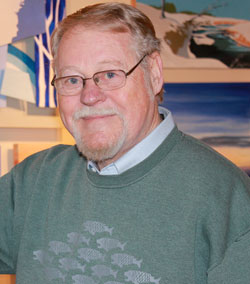 In summer 2006, at the age of 69, Anders Himmelstrup sold his shares of his business, Graphic Systems Inc. of Minneapolis, to his partner and retired from the business world—but not from life, as he puts it in the preface to his new self-published book, Himmelstrup: 10 years of Painting and Sculpting.

His retirement allowed him to focus on his painting and sculpture, something he’d put aside as he raised his family and made a living.

A native of Denmark, Himmelstrup had trained as a lithographic artist in Copenhagen and studied at the Royal Danish Academy of Arts there. He eventually immigrated to Toronto, Canada, where he worked as a lithographic artist and played cello in the Toronto Conservatory Symphony Orchestra. He met Julie Vincent in Toronto, and they married in 1960. He immigrated to the United States in 1963, settled in the St. Anthony Park Neighborhood, became a father to two daughters and started his graphics business in 1970.

Himmelstrup set up a studio at the former Chittenden & Eastman Building on University Avenue in the late 1990s. When that building sold in 2010, he moved the studio to the Dow Building at 2242 W. University Ave.

The book—which was bound at E&L Bindery on Vandalia Street (see the story above)—is a collection of Himmelstrup’s work from the past 10 years. The book contains more than 100 photographs of his paintings and sculptures, as well as essays he wrote about his work.

The book was created to give as gifts to family and friends, he said, but there are some copies for sale at Micawber’s Books, 2238 Carter Ave.