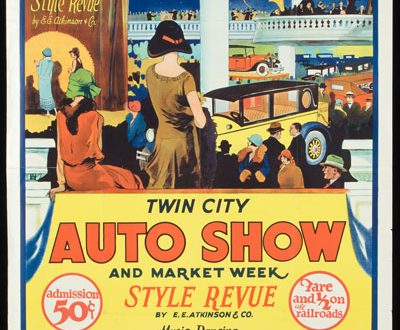 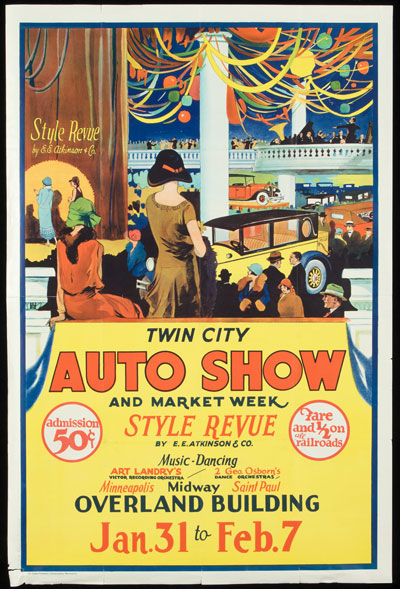 This poster for the 1925 auto show gives a sense of all that was going on.

In late winter for much of the 1920s, people knew to head to a huge building halfway between St. Paul and Minneapolis, not just to see the latest Pierce-Arrows or Hupmobiles on display, but for style shows, vaudeville acts and to dance to the music of live orchestras.

Yes, the auto show was the place to go and up to 20,000 people a day paid 50 cents to enter the Overland Building, today called Court International, 2550 W. University Ave., St. Paul.

For the rest of the year, it was a distribution and service center for the Willys-Overland Co., one of America’s top carmakers.

The first auto show in the country was held in New York City’s Madison Square Garden in 1903, and subsequently, each of the Twin Cities had its own event—sporadically—with Minneapolis leading the way in 1907. The choice of the Overland site for 1918 was conducive to a cooperative effort by the cities.

As the local shows became more successful, the newspapers of the era used the same hyperbole they applied to the Minnesota State Fair (“bigger and better than ever before”): “The show will be double the size and have double the number of exhibits and floor space of any previous show, equaling the great auto shows held at New York and Chicago in all essentials and surpassing them in some.”

And there was no slacking off in 1918 when the Overland played host for the first time to what was called the Twin City Auto Show and Industrial Exposition. It was to be, one newspaper declared, “the greatest of its kind ever held in the world.”

There’s no doubt that the Overland was big enough. With nearly a half-million square feet of floor space spread over four floors, it was said to take 27 tons of coal a day to heat the place.

World War I was raging in Europe and, befitting the times, the show had a serious emphasis, particularly on the use of motor vehicles to support the war effort. On display, for example, were “many attachments for converting ordinary passenger cars into light farm tractors.”

In a given year, there might be 40 brands of cars on display, along with trucks and tractors, and dozens and dozens of exhibitors from the ever-expanding ranks of parts and accessory suppliers. 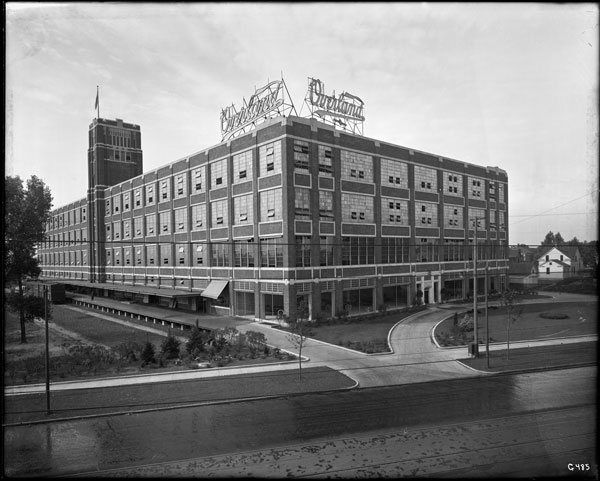 The Overland—now Court International—Building looks much the same today, although the railroad spur and loading docks on the east side are long gone. Photos courtesy of the Minnesota Historical Society

In 1920, Bill Kidder, manager of Curtiss Northwest Airport at Snelling and Larpenteur avenues, displayed an Army surplus Curtiss Jenny trainer, as well as the new Curtiss Oriole five-seater. He boasted at having sold seven planes on the first day of the show.

Franchised dealers from across the region attended and placed orders for cars. It was not uncommon for an automaker to have several hundred dealers in attendance, hosting them at luncheons and dinner banquets during show week.

Members of the public could also buy cars, which started at $300. In 1922, a Rolls-Royce five-passenger touring model sold for $15,000 to a customer who demanded anonymity. Several years later, Minnesota Gov. Theodore Christianson bought a modest sedan for his personal use.

And beyond the show floor, there was a lot more going on in any given year. In 1923, a relatively new communication medium staged live broadcasts (Headline: “Mysteries of Radio Revealed”), including a performance by Tom Brose and His Purple Derbies Orchestra.

In 1925, there was a “Boulevards of Paris” theme for a fashion show, which claimed to feature $100,000 worth of imported gowns.

Newspapers in the region sponsored contestants in a Miss Newspaper beauty contest. And Eddie Rickenbacker, World War I flying-ace-turned-racecar-driver, made several appearances at the Overland. In 1923, he wanted to set the record straight: “Don’t let anyone tell you that the automobile business is going to smash because of a shortage of petroleum. There’s a lot of talk about the end of the gasoline supply being in sight, but that’s a long way off.”

In 1927, the second floor of the Overland was decorated in a springtime theme, with singing caged canaries artfully hidden among the cherry blossoms.

But that was the finale at the Overland. Behind the scenes, there was likely discontent on the part of Minneapolis interests right along. You could say what you wanted about this “midway” location, but, let’s face it, the show was in St. Paul.

As far back as 1923, E.B. Stinson, executive secretary of the Minneapolis Citizens Municipal Auditorium Committee, said the Overland was ill-suited to the event and his city needed a facility of its own.

Anyway, the Overland no longer was available. Once the No. 2 auto manufacturer to Ford, Willys-Overland was selling off assets and, in 1928, International Harvester purchased the building.

The St. Paul Association, predecessor to the Chamber of Commerce, sponsored its own auto show in 1928 and briefly tried to block Minneapolis from using the Twin City Auto Show name for a competing event in its new auditorium.

So much for intercity cooperation.

The 1917 Twin City Auto Show had what in retrospect appears to have been a bizarre sponsor: the Ku Klux Klan.

In that year, prior to its first staging at the Overland Building, the show was held in the Mazda Lamp Building, a light bulb factory on Broadway Street in northeast Minneapolis.

Participants were invited to don Klan robes with “Auto Show” on the back and ride in a parade from the show headquarters to downtown St. Paul where the Winter Carnival was wrapping up. 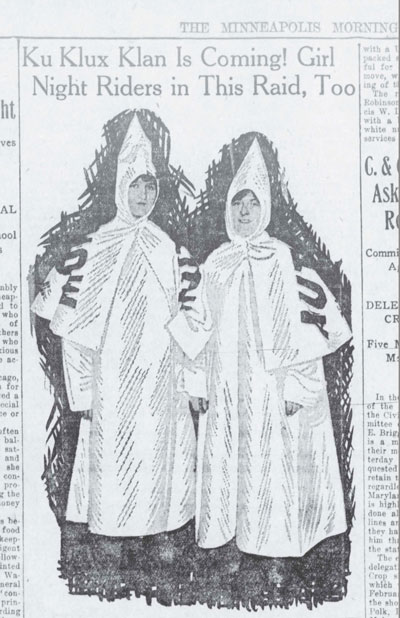 In its second incarnation, the Ku Klux Klan clearly was attempting to broaden its appeal.

“Nightriders to Ride in Broad Daylight,” was one headline. “Auto ‘Clansmen’ Ready for Raid” was another.

The Minneapolis police chief not only OK’ed the parade but also said he might participate himself.

A post-Civil War alliance of white supremacists in the South, the Klan was experiencing a widespread resurgence at the time, partly inspired by the 1915 film “Birth of a Nation,” originally titled “The Clansman.”

Although there were relatively few African-Americans in Minnesota in that era, Catholics, Jews and “foreigners” were tempting targets for those uneasy about the nation’s impending involvement in World War I, urbanization/industrialization and a perceived assault on “Americanism.”

Members often went about unmasked, and the new Klan tended to portray itself as a fraternal organization, which can clearly be seen in the case of the auto show. Its influence in Minnesota, where there reportedly were more than 50 Klan chapters, peaked in the mid-1920s.