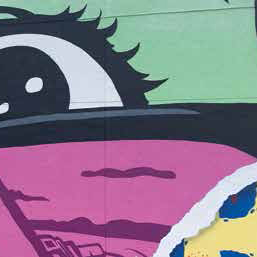 The north side of the Bro-Tex building in St. Paul looks like a page from a comic book since last fall’s Chroma Zone Mural Festival.

Artist Biafra’s brightly colored character peers from the cement wall, removing her sunglasses to better witness a ship sinking. The doomed ship can only be seen reflected in her glasses.

Biafra explained that his mural, “Crisis,” was inspired by America’s current political and social climate. “Right now, our country is so divided on everything and everyone is at each other’s throats,” he said. “Our country is slowly sinking, and we are just standing by watching it happen.”

Biafra completed “Crisis,” his largest solo mural to date, with 30 cans of spray paint last September during the Chroma Zone Festival. The Bro-Tex building is located at 800 N. Hampden Ave.

“I had a great time with Chroma Zone. I only wish the weather had been better,” Biafra said. “It was great to see so many people out and about, wandering around the neighborhood checking out the murals and talking with each other.”

Biafra confessed that he enjoys checking out the murals every couple of weeks. “I really like looking at the bright colors.”

Biafra’s biography swears that he hadn’t planned on being an artist. But after creating some stencils for his skateboard (and becoming interested then in graffiti and screen printing) he traded his education major for an art major, earning his Bachelor of Fine Arts from the University of Minnesota. He describes his work as “text heavy and hard lines.” He said he uses comic book characters because they “are instantly relatable to every generation and represent an idealistic time.”