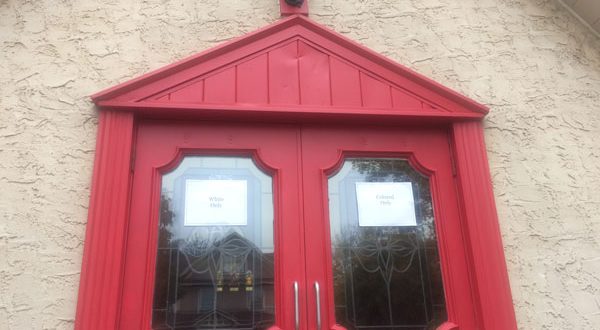 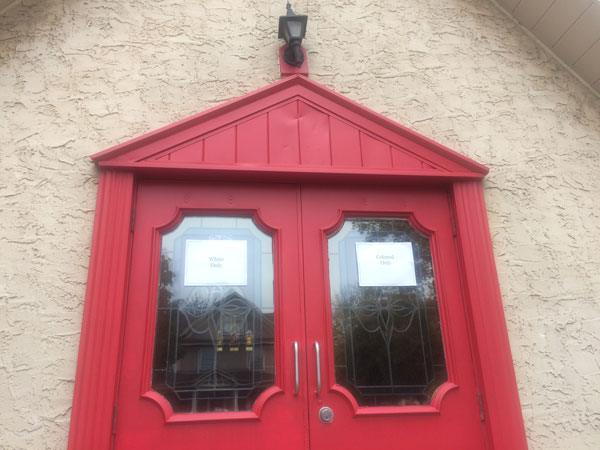 As visitors approached the doors to Holy Trinity Episcopal Church, 1636 Van Buren Ave., on a Saturday afternoon in early November, they were greeted with two signs. The one on the left door said, “White only”; the one on the right, “Colored only.”

The signs set the tone for the afternoon’s event, “Jim Crow: Then and Now,” the first of a four-part discussion series aimed at opening dialogue on racial and ethnic issues.

Nearly 60 people—both black and white—attended this inaugural event of “Community Conversations for Racial and Ethnic Reconciliation and Understanding,” funded through a grant from the Episcopal Church in Minnesota. Holy Trinity, a small predominantly African American church in the Hamline- Midway neighborhood, has partnered with St. Matthew’s Episcopal Church in St. Anthony Park, Hamline-Midway business Mosaic on a Stick, Hamline University, Concordia University, Luther Seminary and Hamline United Methodist Church to present the series.

As participants settled into their seats at tables set up in the basement social hall of the church on Nov. 4, Marvin Gaye’s song “What’s Going On” played in the background. “What’s Going On,” was the unofficial theme of the afternoon, said facilitator Vanne Owens Hayes. The group was there to discuss their own experiences with Jim Crow laws in the past and how remnants of those laws continue now.

Jim Crow laws were state and local laws that enforced racial segregation in public facilities in the South and in public transportation, including segregated cars on interstate trains and buses. These laws were enforced until the Civil Rights Act was passed in 1964.

Linda Finney, a member of Holy Trinity and one of the coordinators of the Community Conversations, remembers sneaking over to a “white-only” public drinking fountain near her home in Miami-Dade, Fla., in the 1950s. She was just a kid, and curious and black.

“I remember thinking, ‘It’s got to be better. Why do they separate it like that? There’s got to be lemonade in that one.’ ” She tasted it: “Just the same,” she said.

Later, as a teenager, the Civil Rights Act was passed, and she has not forgotten “that visceral feeling” she had when she found herself one of two black students in a newly integrated classroom. “I finally connected what it meant to be a minority,” she said.

The school bus she rode in was rocked by crowds of white kids as it pulled up in front of the school. When she walked into the school cafeteria, she saw white students lay their heads on the lunch tables and whisper expletives as she and her black schoolmates walked past them.

And “the teachers and administrators did nothing to stop it,” she said.

“People assume Jim Crow was only a Southern dynamic,” she said. “It was all over this country, even in this state.”

There were laws in Minnesota in the 1950s that said a Native American living on a reservation could not vote. Homes in some communities had real estate covenants that stated owners could not sell to certain races or ethnicities. And there were laws throughout the country that made it illegal for a white person to marry “a Negro, an Indian or in some places they referred to Asian as ‘Malays,’ ” Finney said. “That’s Jim Crow.”

Those who were raised in Minnesota had their own stories to tell at the gathering. Rita Lyell, daughter of Minneapolis civil rights leader Harry Davis, recalled how her younger brother had to be escorted by police to school when their father ran as the DFL-endorsed candidate for Minneapolis mayor in 1971.

Owens Hayes grew up in St. Paul and attended Webster Elementary School, the only black child there in the early 1950s. She recounted her story of being delighted at an invitation to a tea at a classmate’s home and then being told she had to go in the back door of the house, not the front door.

Attendees told stories of being chased out of Northeast Minneapolis — an area of town where black teenagers knew they were not welcome — and of the sections of the city where their families were not allowed to buy homes and businesses they knew better than to walk into, some of which are still unwelcoming to blacks today, Owens Hayes said.

“The past is bleeding into the present day,” Finney said. Americans need to understand our history and have respectful conversations around race and ethnicity, because “if you understand your history, you are less likely to repeat some of it,” Finney said.

The second Community Conversation will address microaggressions and their impact on relationships both at work and on campuses, Finney said. The event will be held Saturday, Feb. 24, from 2 to 5 p.m. at Hamline United Methodist Church, 1514 Englewood Ave. For more information, email holytrinityepiscopal@q.com. The last two forums will be held April 28 and July 14. The subjects and locations have not been determined.

Planners felt talking about what it was like to live under Jim Crow was an important topic to start with, especially for young people. The Jim Crow discussion was intentionally kept to 60 people to enable those in attendance “to have a conversation,” Finney said. The February conversation will accommodate more people.

Finney said Holy Trinity’s aim is to bring people together in a safe and respectful forum through these Community Conversations. This small church has an active membership of just 50 to 75 people, she says. Nevertheless, “I call us the little church that could,” she said.