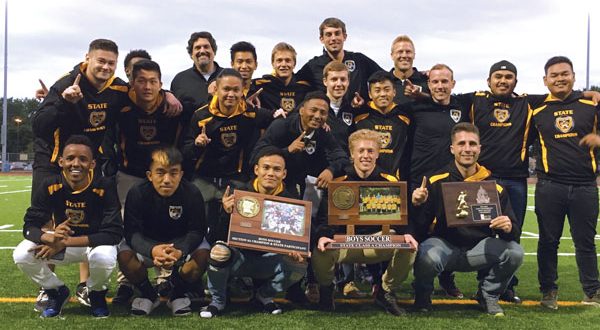 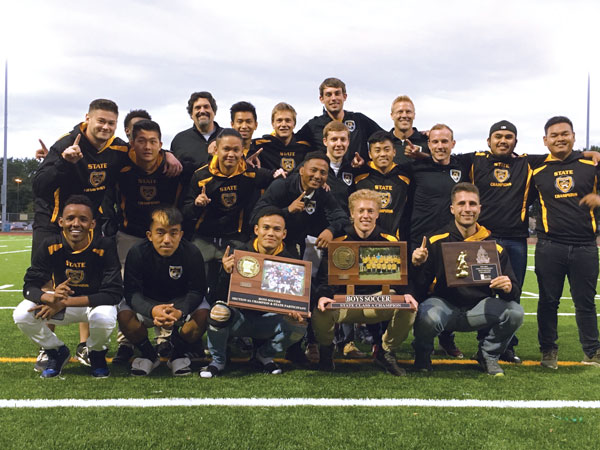 The undefeated 2013 Como soccer team that won the city, section and state championships celebrated a five-year reunion and was honored at halftime of a game at Como on August 28. Photo by Suzanne Susens

The high school fall sports season kicked off on August 13 all across the state with try-outs and extended training sessions. Como’s student athletes were immersed in competition during the last week of August, and believe it or not, section play-offs commence during the second week of October for tennis andsoccer. It’s a fun, intense, whirlwind of activity that accompanies the start of the academic year.

More than 250 Como students participate in a fall activity. Some programs are intimate with all players training together, while others feature multiple teams at different competitive levels. Como takes pride in its “no cut” policy and giving every eligible athlete the opportunity to play in the sport they choose to try.

The benefits of participating in school sports are numerous. At a minimum, students pursue an interest or passion, improve physical fitness, develop a growth mindset, build relationships with each other and connect with their community The impact can be long-lasting.

A celebration of enduring relationships and continued growth was held at Como Aug. 28 when the 2013 boys soccer team gathered for a five-year reunion. At half-time of the first-ever night game on campus, the undefeated team from five years ago was recognized for the city, section, and state championships they earned. More important, they were honored for the collective service, employment, study, associate’s degrees and bachelor’s degrees they’ve achieved.

The hard-working character traits developed through school athletics are transferable to the pursuit of improving individual lives and society. The friendships formed through school sports have a special bond and staying power.

Kids playing for Cougar teams have embarked upon their own unique journeys in this 2018 fall season. Here’s a mid-season update about each of Como’s varsity teams and a glimpse of what to expect as the Cougars navigate their paths through a rewarding, and busy, time of the school year.

The Cougars graduated more than 20 seniors from a team that went 6-3 in 2017.This year’s team is young and returns just one starter on each side of the ball. However, the season started splendidly with a lot of learning in early-season practices that led to wins in the first two games. Key contributors include Alonte Johnson (LB/WR), Morris Walker (RB/LB), Alex Fusco (OL), Josh
Ward (RB/DB) and Chue Chang (OL/LB). As seniors and the most experienced players on a youthful roster, they are leading underclassmen and providing excellent examples of commitment.

The program is composed of 80 players on four competitive teams including the varsity, j.v., b-team and c-team. The varsity squad is led by senior captains Mu Ku Shi, Pa Sad Tit, and Yunis Mohamed. Skilled and speedy attackers include juniors Aziz Ahmed and Adonay Hanns.

The varsity boys had a daunting nonconference schedule before Labor Day that included games against Austin and Mahtomedi (both ranked in the state’s top five). The Cougars lost both those games, but responded well with positive practices and paved a path forward with the expectation of growing stronger together and uniting to make some memories in the St. Paul City Conference rivalry games and beyond.

Thirty runners are training together, covering a lot of ground in the Como neighborhood. Top runners on the boys side include seniors Antero Sivula, Issac Harker, and junior Alistair Pattison. For the girls, sophomores Mira Seeba and sophomore Claire Olson, and freshman Saylor Landrum are consistently at the front of the pack.

The Cougars cross country team was featured on the 651Sports Update radio show on WFNU 94.1 FM. Seniors Bruce Deal and Abdulkarim Ogato, along with Seeba and Olson, were interviewed about the consistently strong Como program. They highlighted the Roy Griak and Pike Island Invitationals as key meets on the Cougars’ schedule.

A core group of players from a team that posted a 15-4 record last season are returning. Experienced team captains leading the team include seniors Celia Olson and Gigi Gabrielli, along with juniors Taw Bee and Tina Million. The Cougars have a dynamic scoring attack led by Shar Too and Rebar Htoo, complimented by sophomore Olivia Barnes. Abrianna Armenta, also a sophomore, is a steady force in the middle of the field.

The soccer girls had already posted a 4-0 record as the Bugle went to press with impressive wins over Mounds Park, Minnehaha, Concordia and Tartan. The Cougars have a challenging schedule, but the team is focused on positivity and supporting each other in order take on strong opponents. 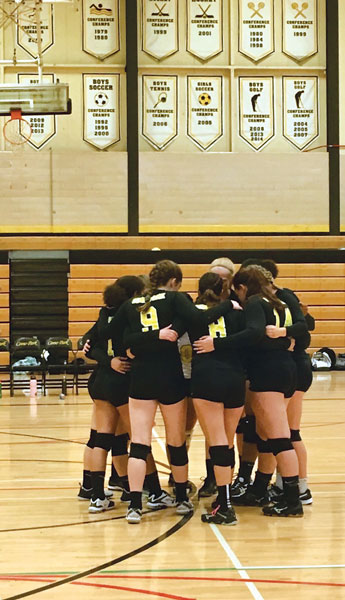 The Cougars varsity volleyball team huddled up before their opening home match in the Como gym on September 4. Photo by Bekah Hausman

Twenty-nine girls are in the program this season, which is smaller than a year ago, but still allows Como to run a varsity, junior varsity and c-team. The varsity team is young, led
by junior captains Carter Brown and Anisa Smith. Brown plays middle and Smith is the lead setter. Sophomore Hannah Hausman is an effective outside hitter.

The team’s schedule was busy in August with practices at Murray Middle School to accommodate construction at Como, and fundraising at the State Fair.
According to fair officials, Como volleyball is the second longest serving work crew at the fair (one year behind Como’s JROTC program).

Numbers are higher this year which has added energy to practices and provided depth for the program. Juniors Amira Boler and Molly Swanson are serving as captains. Boler was an all-conference honorable mention swimmer last season, when the Cougars finished third out of the five teams that compete in girls’ swimming in the St. Paul City Conference.

Goals for the season are to have the returning swimmers accept the challenge of competing against fast opposition and to have the new swimmers improve both their technical movements and speed.

Team captains this season are senior Victoria Hartwich- Cedillo, and juniors Abigail Karan and Stella LaCroix-Dalluhn. Hartwich-Cedillo and freshman Eva Larson are playing in the top singles
positions. Team goals for the year are to improve skills and gain confidence in competitive matches. The Cougars would like to notch a couple wins and finish higher in the city standings. Other objectives are to keep it fun and enjoy team bonding activities while creating new friendships.

Eric Erickson is a social studies teacher at Como Park High School and a long-time coach of school and youth sports in St. Paul.