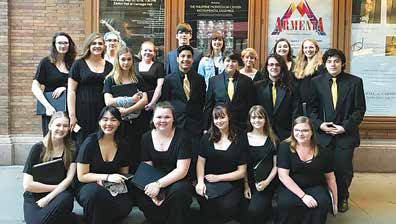 Members of Como’s three advanced choirs traveled to New York City for five days over Memorial Day weekend to sing at Carnegie Hall. After much practice in St. Paul, they rehearsed eight hours while in New York before performing at Carnegie with choirs from around the country under the direction of renowned conductor, Maestro John Rutter. The concert, which included the accompaniment of a professional orchestra, received a standing ovation.

When the Como choir students were not singing, director Carole Whitney led them on visits to the Statue of Liberty and the 9/11 Memorial Museum, navigating the subway from their hotel in Midtown. Other sites included Times Square, St. Patrick’s Cathedral, Central Park, Rockefeller Center and the Top of the Rock.

Additional highlights were eating huge pieces of pizza for $1 a slice, taking in a dinner-and-dance cruise around the southern tip of Manhattan, and seeing two Broadway musicals, King Kong and Kiss Me, Kate.

Rosmery Moran-Osorio, a Como Park junior and leader within the Marine Corps JROTC program, was selected as a Semper Fidelis All-American. The award comes with an all-expenses paid trip to Washington, D.C., in July to compete in the Marines’ Battles Won Academy. Cadets may choose one mentor to partici­pate in the program with them, and Rosemery has selected her Spanish teacher, Angela Butler.

The prestigious Semper Fidelis All-American honors high school students who have faced overcome serious challenges and obstacles to excel academically and emerge as leaders in their communities. Rosmery is a first-generation Guatemalan American student and will be the first in her family to graduate from high school. She earned a cumulative 3.5 grade-point average.

Moran-Osorio’s application essay revealed her perseverance and her initiative to succeed “Leaving Guatemala, being born in the U.S. and making a fresh start in the United States has been a godsend for my family,” Rosmery said.

While in Washington, D.C., the students and mentors will participate in community service events, team-building outings and high-intensity daily workouts at Marine Corps Base Quantico.

Twenty-seven Como students participated in the annual A Vous la Parole French-speaking contest held in Coffman Memorial Union at the University of Minnesota. The annual event is sponsored by the Minnesota Chapter of the American Association of Teachers of French, with support from the University of Minnesota Department of French and Italian. The contest recognizes excellence in French speaking skills and this year drew 1,220 student entries from across the region.

The following Como students earned blue or red awards at this year’s contest:

The third annual edition of the Cougar Journal, a student-­produced arts and literary maga­zine, was released with an event in the school library on May 29. Senior Cadence Paramore was the editor-in-chief, organizing the publication, which features artistic works of writing, poetry, drawing, painting and photography.

The Como Park Fashion Club was formed this school year and club members held their inaugural “Fashion Glam Event” after school on May 30. Master of Ceremony Roselyn Yeboah and President Ly Xiong worked with other club members and the school community to stage an extravaganza, including dance, music and Como students as runway models on the “red carpet” at the base of the Cougar Forum.

More than 100 students and staff attended the event with Miss Hmong Minnesota in attendance.

Seniors from the Class of 2019 and their families celebrated accomplishments at several events in May and June. Senior Honors Night was held in the Como gymnasium on May 14, with the recognition of academic awards and scholarships. The Como Park Booster Club hosted the Senior Barbeque on May 31.

Graduation was held at Roy Wilkins Auditorium downtown on June 5, followed by the traditional all-night graduation party within the school, concluding at sunrise on June 6.