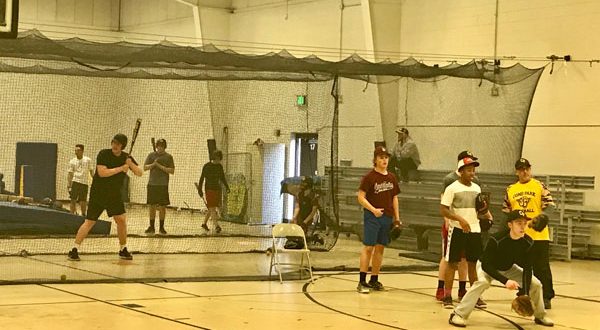 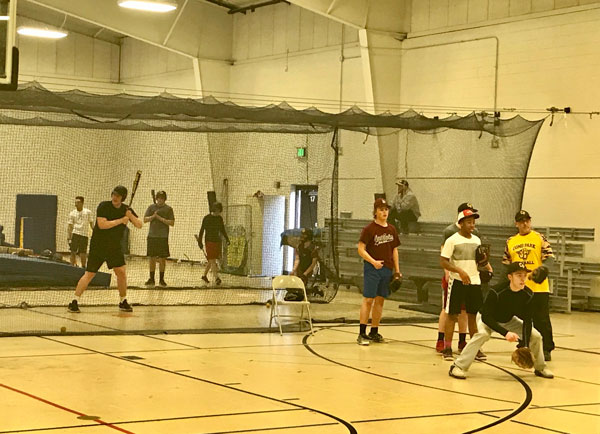 Como baseball players have been using the field house to practice in the evenings since mid-March.

A few months ago, the Bugle ran a story about Como’s Nordic Ski team waiting for winter.

It’s no secret that once it came, winter had an extended stay. April’s cold and snow brought challenges for teams of student athletes across the state in all the spring sports. The Como Cougars had more indoor practices than they could have imagined.

The field house at Como had steady use after school and into the evening to accommodate baseball and softball players, and golfers, who can all hit into nets. While not ideal, some defensive work could also be done, including pitching and infield practice on a hard surface.

The track team ran down the hallways more than around the track. Other groups, including tennis and Ultimate Frisbee struggled to find time and space for training. It’s been a slow start to the spring sports season.

When it gets going, the game and meet schedules will be packed due to a slew of cancellations from the first month of the season. That means the baseball field and softball field directly east of Como Park High School will be a busy space with Cougar games nearly every day.

Here’s a preview of the action on the diamonds — where Como teams have historically had strong showings in the St. Paul City Conference.

The Cougars have won seven championships in the history of the St. Paul City Conference. Six of those titles were earned in the last 10 years.

In the past two years, the conference coaches voted to adjust the structure of the competition and play just one round of games against city opponents. The top four teams then qualified for a tournament to determine the conference champion.

Como went undefeated during the single round-robin in both 2016 and 2017, but fell in the tournament final to Highland Park both years. Thus, while Como compiled the most wins during the regular season, the city championship belonged to Highland.

For the 2018 season, the traditional format of two games vs. each conference opponent is returning. Cougar coach John Fischbach voted to keep the tournament structure, even though the tournament losses caused his team frustration. However, a majority of coaches preferred the double round-robin format and democracy wins.

To try and earn a title this season, the Cougars will need to have solid pitching from a pair of underclassmen. Freshman Bella Proper and sophomore Bailey Huepenbecker will share the important duty left vacated by Kathryn Proper, who set multiple school records on the mound and is now a freshmen pitching for St. Catherine University.

When Huepenbecker is pitching, Bella Proper will be the catcher. When Proper throws, senior Alexis Barnes will move from third base to catcher and Huepenbecker will play third. The flexibility of those three will be key for the Cougars.

“We’ve been working hard, and I’m pleased with their positive attitude and proud of them for putting in the time inside to get better,” Fischbach said. “We’ve got young pitching, and they’re going to have to learn as we go, but our No. 1 goal is to win the city conference.”

The Cougars have been a fixture in the top half of the St. Paul City Conference standings for more than a decade. In the last 10 years, under co-coaches Matt Smith and Lenny Franco, Como’s conference record is 70-29. The Cougars’ last conference championship was in 2014. The goal for 2018, as always, is to compete for the title.

Smith says that Highland and Central are the top teams going into this season, and a lot of things will need to go right for the Cougars to contend with them. That being said, the Como coaches are encouraged by what they’ve seen after weeks of work in the field house.

The players have been focused and put forth consistent effort that can only increase the chances of catching breaks in their favor if the work ethic stays on the same path.

Senior leadership will be provided from Gunnar Olson, Donny Ventrelli, Colin Columbus and Patrick Corniea. They will form the heart of the batting order. Corniea and Columbus are capable of getting on base while Olson and Ventrelli (who are 6 feet 6 inches and 6 feet 5 inches, respectively) can drive runners home when they connect.

Olson will also be a key pitcher, as will junior Raef Eddins and sophomore Ephraim Mau. Columbus will anchor the defense behind the plate as the catcher. The middle of the infield will be covered by junior Tommy Freberg, Mau (when not pitching), and whoever shows reliability on routine plays.

A big concern for many schools, including Como, is the depth of pitching. There are strict pitch counts enforced by the Minnesota State High School League (MSHSL), which coaches support and understand, because it protects players and their arms.

With the condensed schedule due to the prolonged snow, however, the challenge will be navigating multiple double-header games that are likely to occur. Teams with less experienced pitchers may struggle, as more kids are needed to comply with pitch counts.

Another new twist to this season’s schedule is the MSHSL approval of shortened five-inning games in doubleheaders, which was announced on April 11. The accommodation makes sense given the lack of days for games, but it will still be strange for teams and fans, and it will challenge coaches with a wide range of managerial decisions.

“We’ll adapt,” Smith said. “We’ve been dealing with conditions we can’t control for six weeks already being indoors. The boys have had a positive approach to the situation. Whenever we get outside for games, it’ll be fun.”