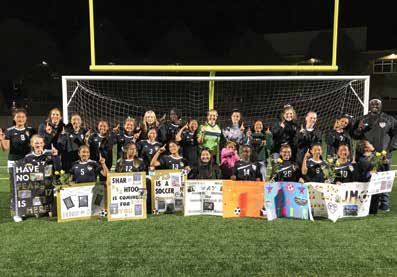 With an undefeated conference record of 6-0, the Como Park High School Cougars claimed the conference championship in girls’ soccer for the first time since 2005.

Historically, the Como girls have frequently finished in the top three of the conference. But Central and Highland have traditionally had a grip on the top two spots.

The championship became official on Sept. 25 when the Cougars completed an 8-0 shutout over Johnson. Smiles, hugs, and a sense of satisfaction accompanied the post-game pictures on what was fittingly Como’s Senior Night.

Three seniors on this year’s championship team came to Como as talented freshmen and have been four-year varsity starters. Shar Too has been the team’s scoring leader and an All-State player since ninth grade.

Senior captain Valentina Million is a versatile player who has become an anchor of the Cougars’ defense. Senior captain Ree Bar Htoo is a strong and skilled playmaker with a great gift for scoring goals.

Senior Diana Rodriguez is a dynamic midfielder who has been a two-year starter, and senior Kiersten Howatt has been a reliable role player for two seasons.

With that senior leadership and ability forming Como’s core, first-year head coach Hussein Mohamed was able to help guide the group to the top of the city.

“I know these girls were competing and had been making big improvements as a group,” Mohamed said. “Como is like a family and so many people helped the team get here, and also helped me as a coach.”

Mohamed and his senior leaders are quick to applaud every team member.

Junior Anna Weins has emerged as an excellent goalie during her three seasons with the Cougars. Junior captain Abrianna Armenta has been a solid central defender since her freshman year. Junior Olivia Barnes is also a third-year player who is always a threat to score from distance or serve up dangerous crosses.

The junior class is deep with other key contributors, including Hser Wah, Emilie Hanson, May Htoo Kyaw, Tee Wah Pah, and Maiseng Thao.

The diversity of ages, personalities, and soccer talents have blended together to make the team greater than the sum of its parts.

“We’re not the biggest or tallest team, but when we play, we leave everything on the field,” Rodriguez said. “The phrase that best describes us is ‘heart over height.’ We’ve been down in games before, but we have heart and we’ve come back to win some of those games.”

“We all have a passion for soccer.” Million agreed. “There are good individual skills, but we love playing together and working to get better as a team.”

The collective effort to improve has been years in the making. None of these girls had ever beaten Central or Highland before. So accomplishing both to win the conference was a massive reward. “It shows all of our hard work paid off,” Weins said. “We’ve been trying for so long and we’ve been getting closer and then this year, it finally happened.”

“It felt so good!” Kanu said. “Walking off the field after those games, knowing that we won, with family and friends there, they were really proud.”

The pride is evident in the Como soccer community. From parents, teachers, former players, and current players in the boys’ and girls’ programs, there has been joy in witnessing the effort put forth by this team and celebrating their accomplishment.

“To see the girls win the conference means so much,” said Kyle Johnson, who coached the Como girls from 2016-2018, shaping the development of this group which are now champions. “I know how hard they have worked to get to this point.”

What the girls have accomplished is gratifying for Coach Mohamed, a former Como student and varsity boys’ player from the class of 2012 and now a full-time educational assistant at Como.

“To be able to help students here, and to be able to coach soccer here, means everything.” Mohamed said. “I loved playing here, and to be leading the girls’ team now is really special. I’m happy to help the girls try and reach their goals with the help of the Como family.”

As the Bugle went to press, the Cougars had completed the regular season with an 11-3-1 overall record. That impressive mark was achieved against high-level competition from section opponents in the east metro as well as large suburban schools like Prior Lake and Shakopee.

The city crown and non-conference success earned the Cougars the No. 3 seed for the Section 4A playoffs, which features 13 teams. A run to the semi-finals would be fun, but Coach Mohamed and the Cougars aren’t looking too far ahead.

“We’re concerned with our next practice,” Mohamed said. “Then the next one.”