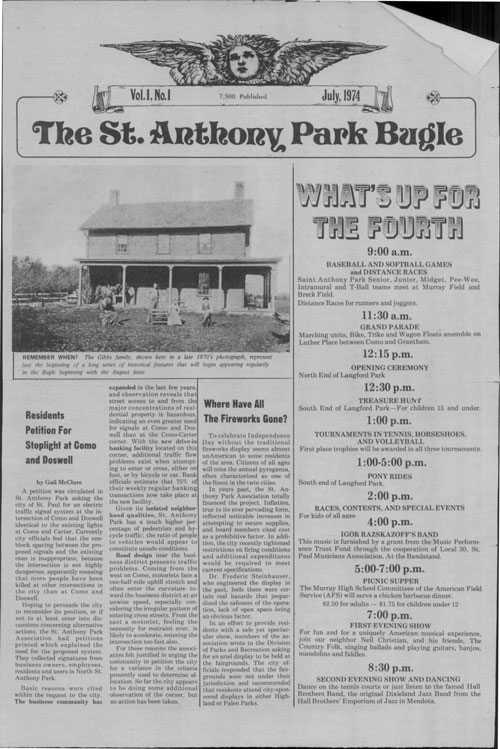 Editorial: Of milestones and music

There’s a whole lot of anniversaries going on in the community in 2014.

The Music in the Park Series, founded by St. Anthony Park resident Julie Himmelstrup, is celebrating its 35th season of bringing chamber music to audiences in St. Anthony Park.

Now under the auspices of the Schubert Club, Music in the Park is teaming up with the St. Anthony Park Community Foundation—which is celebrating its 15th year of giving—to celebrate their combined 50 years of being part of the St. Anthony Park community. The two organizations will revel with Twin Cities-based trio the New Standards on Mother’s Day, May 11, at the St. Anthony Park United Church of Christ with two concerts, one at 4 and one at 7 p.m. Tickets are on sale now, and you can find out more at www.schubert.org. The real granddaddy of the birthday celebrants is the Bugle, which is about to mark 40 years. In 1974, Richard Nixon resigned as president of the United States, newspaper heiress Patricia Hearst was abducted by the Symbionese Liberation Army and girls were accepted into Little League baseball. People wore Earth shoes and listened to Barry White. And in July, the Park Bugle published its first edition. The paper’s first front-page stories reported on residents petitioning for a stoplight at the corner of Doswell and Como avenues and listed the events for the July 4 celebration at Langford Park. Those stories were formatted on a typesetting machine. The paper was “pasted up” on a light board. The tools of the trade were X-Acto knives, wax machines and pica poles. A lot of stories have been told over four decades, and throughout the rest of 2014, we plan to take you on a nostalgic tour of the Bugle’s early days. We’ll post an article or photo from the paper’s first 10 years on these pages starting next month. And we might throw in a few surprises.