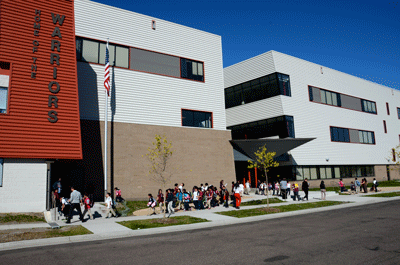 The Hmong College Prep Academy in Como Park is thinking green as it expands to accommodate its rapidly growing student body. The K-12 charter school at 1515 Brewster St. is seeking LEED certification for the $12.8 million, 78,300-square-foot addition that opened this year.

The design relies on a number of features to achieve the requisite goals for LEED certification.

Compared to a typical school design, the renovation was planned to reduce overall power consumption by 10 to 15 percent, to reduce water use up to 40 percent, to capture and clean 100 percent of storm water, and to use environmentally friendly interior materials, according to a release from Kodet.

A permeable paving system with underground infiltration basins that capture storm water, all-native landscaping that requires no irrigation and high-efficiency plumbing fixtures will all help reduce water use, according to Kodet.

A centrally located 477-seat theater is another one of the new building’s main features. It offers a full stage, green room, production area and other amenities that complement the school’s fine arts offerings.

Though the school still lacks outdoor playfields for some of its 10 varsity and junior varsity sports, Hang says that is in the works, as well.

The renovation was financed by a combination of private investors and bonds issued by the City of St. Paul. Because charter schools are not allowed to own their buildings, Hang and her husband, Pao Yang, who is the academy’s chief operating officer, started a nonprofit to buy and renovate the building in 2006.

Since its first year of operation in 2003, when 200 students were enrolled, the school has experienced rapid and steady growth.

This is the third renovation for HCPA since moving from Minneapolis to its current location in 2006. During that time, enrollment has ballooned to nearly 1,150 students. The school’s plan is to have 1,230 students by 2018, Hang says.

Hang decided to start the academy, which began as a high school only, while working in the Twin Cities public schools.

“I saw a lot of kids just really dropping out of school, definitely not interested in finishing middle school or high school,” she said. “I went to the community and said, ‘I had 50 kids in my class last year, but this year I only saw 25 come back. We have to do something about these kids.’”

That’s when she decided to found HCPA. She wanted to start a school that wouldn’t allow disenfranchised students to fall through the cracks. That involved establishing a culture that is both strict and caring.

There is no hiding at HCPA, Hang says. “Here, when you come, everybody knows your name and everybody knows how you perform. We make sure that kids . . . know that we expect them to achieve.”

For some students at HCPA, that’s a new expectation. Some students have been kicked out of their previous school where they might have attended class five days out of the year, says Hang.

“Here they go to school at least 95 percent of the time and that’s because they feel like they’re important. They’re wanted, and they feel like somebody is finally paying attention,” she said.

As a designated Title 1 school, a high percentage of students at HCPA come from economically disadvantaged households. Eighty-five percent of the high school students receive free or reduced lunch rates, according to Hang.

Though the school was identified as one of the state’s 34 worst performing in 2009, they are designated as a Celebration Eligible school, meaning they rank in the top 25 percent of Title 1 schools in the state. “That tells you that we really focus on student achievement,” Hang says. The graduation rates at HCPA are notably higher than their public school counterparts. According to the St. Paul Public Schools Data Center, 66 percent of students graduated districtwide in 2012, while 73 percent graduated at HCPA, as shown in the school’s 2011-12 annual report. In 2011 the school had an 80 percent graduation rate. “We have a lot of work to do, but I think we will get there,” Hang says.