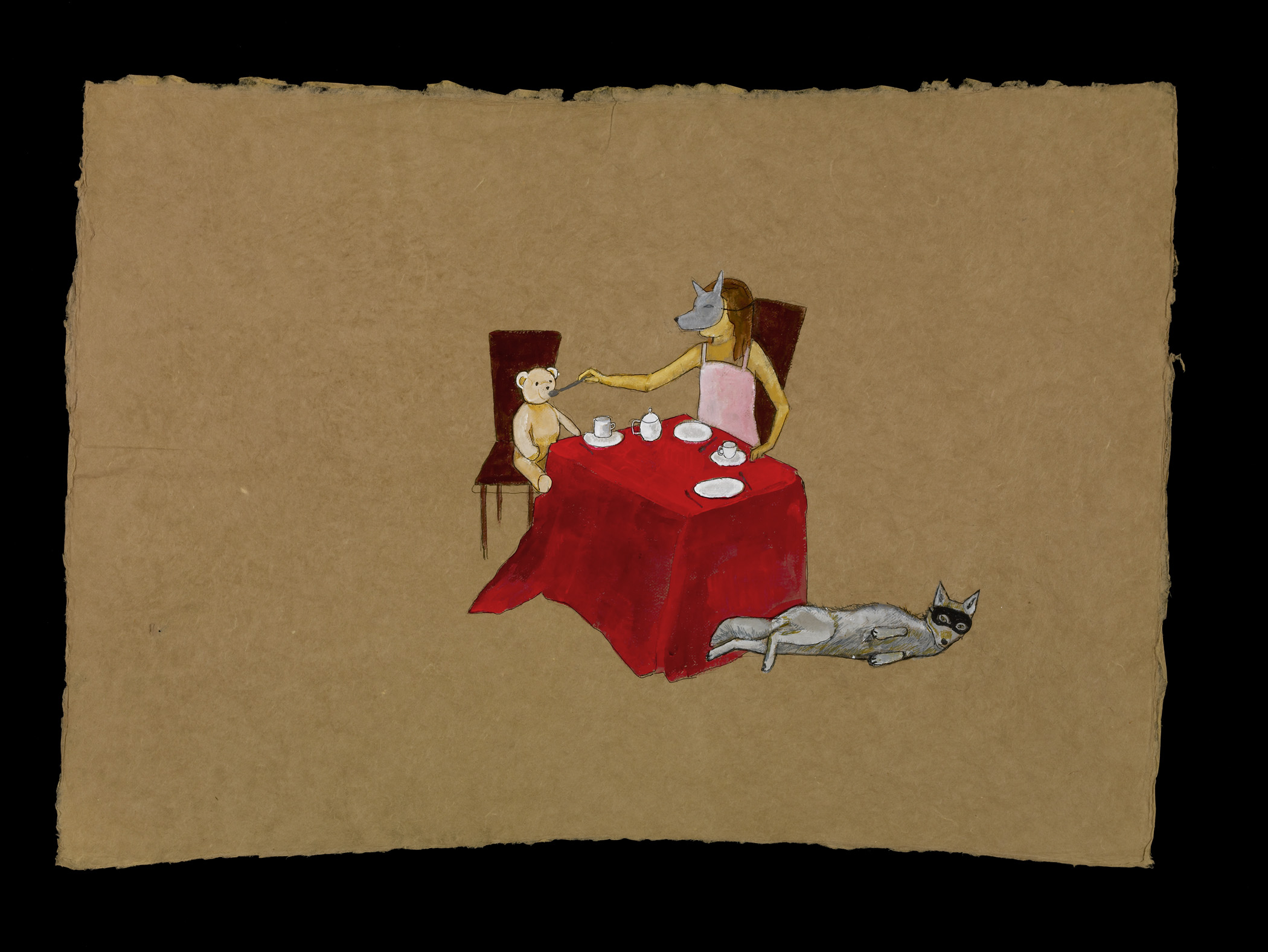 Julie Buffalohead and her furry little friends deconstruct the obvious 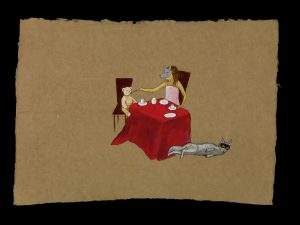 Julie Buffalohead has a thing for coyotes.

In the work of the 40-year-old St. Anthony Park–based artist, coyotes are everywhere. Masked and often costumed in incongruous getups that range from white bridal dresses to red feather boas, the coyotes roam through Buffalohead’s witty canvases like the impossible figures of a dream landscape or—more to the point—like the impudent challengers to conventional cultural images that they are.

For Buffalohead, the coyote works as a potent symbol for the Native American culture that she considers vitally linked to her work. In Native American tradition, she says, “The coyote tends to be a universal character, neither good nor evil. He’s a shape-shifter, a glutton, selfish; but he also creates the world. He’s a fool, but through his mischief he becomes a hero. He represents what it means to be a human being.”

Buffalohead’s iconography of elusive coyotes and other masked animals anchor her work in Indian traditions but also lend it a distinctive visual originality that has established her as one of the nation’s leading Native American artists. Among her many honors are a recently concluded exhibit “Let the Show Begin” at the Smithsonian National Museum of the American Indian in New York. She was also recently awarded the prestigious Eiteljorg Fellowship for Native American Fine Art. As a children’s book illustrator, she’s known for an award-winning biography of Sacagawea.

Immersed since her youth in the traditions of her father’s Ponca tribe of Oklahoma, she was raised in the western suburbs of the Twin Cities as the biracial daughter of a white anthropologist and a professor who served as the head of the Department of American Indian Studies at the University of Minnesota. She grew up drawing horses from an early age in a family that encouraged all forms of art. Well-known Native American artists such as Ojibwe painter George Morrison occasionally dropped in at the family home.

“I was always drawing and writing when I was a kid,” she says, “and I was always an animal lover.”

Animals continue to populate the vivid scenes of her imagination, but nowadays she’s more likely to use them as slyly subversive commentators on conventional images of native peoples. 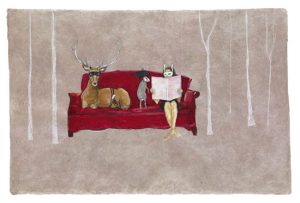 In “The Lone Ranger Rides Again,” for example, a full grown male deer with an impressive rack of antlers is curled up comfortably on a red sofa marooned amid a barren landscape of sparsely planted birch trees. Next to the deer is a maternal figure reading from a storybook to a couple of small animals. Both the mother and the buck are wearing masks—but the deer’s costume takes the form of the black half-mask and gun belt known to generations of TV viewers as the classic garb of the Lone Ranger. An old-time viewer can practically hear the famous trumpet introduction and the calls of “Heigh-ho, Silver, away!” in the background, but this is an image served up with an ironic twist. The legendary invocation has become a catcall, and that’s not the William Tell Overture we’re hearing in our heads but a mocking parody in minor key.

“I try to challenge the viewer with my imagery,” says Buffalohead. “I’m trying to recreate stories.”

The woman in Buffalohead’s painting is retelling the tale of the Lone Ranger and his Faithful Indian Companion, all right, but the imagery undercuts the familiar trajectory of the story. No longer the lone white male focus of a hackneyed narrative of daring do, the Lone Ranger takes the form of buck-as-couch-potato, kicking back to hear his own story.

“I’m not happy with the images of Indians [like the Lone Ranger’s perennial sidekick Tonto] in our popular culture,” explains Buffalohead. 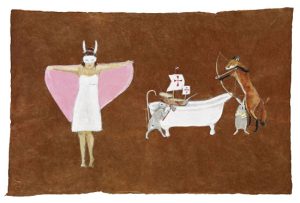 Another painting offers an even sharper critique of America’s foundational myth. In “Columbus Prophecies,” an old-fashioned clawfoot bathtub dominates an otherwise virtually empty space. Off to one side stands a virginal figure in a pink cloak and a white mask. The bathtub is surrounded by animals aiming traditional Native American weapons: a tomahawk and a bow and arrow. And there, in the middle of the bathtub, in the visual heart of the painting, floats a toy-size model of Columbus’s flagship, the Santa Maria.

“Cutting the Enemy Down to Size” might be another name for the painting. Buffalohead, who prefers to make her most trenchant statements through her work, comments only, “I’m referencing how native people feel about heroes who are not true heroes.”

Since she became a mother four years ago, Buffalohead has used her work to explore popular images of womanhood and maternity. “My daughter has opened my eyes to events that happened in my childhood. The toys she picks out, the things she wears . . . revive images of my own childhood in my work,” she says. But just as in her use of Native American imagery, there is something deliberately askew in her presentation of the idyllic scenes of childhood. 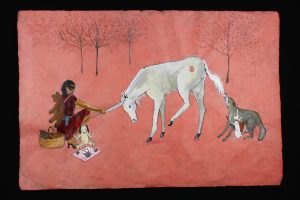 In a work she calls “Sour Cherries 2009,” she gives center stage to a unicorn, the mythical animal that, for Buffalohead, is synonymous with the soft-focus, aesthetic preferences of little girls. What little girl doesn’t like unicorns? But look at the unicorn carefully. In Buffalohead’s painting, it dominates the center of the canvas. Head down, it bears a bloody handprint on its flank. One of Buffalohead’s signature coyotes is pulling on its tail. At its head squats a woman flanked by stuffed animals; they seem to be enjoying a teddy bear’s picnic. But this is hardly a pastoral scene. The unicorn’s horn is pointed directly at the woman’s groin in a gesture that can only be interpreted as phallic.

Says Buffalohead, “I’m just a contrarian in some ways. I like to create an ideal little fantasy scene, then shake things up. . . . I want to show people that a lot of images about women and girls need to be thought about, not just accepted. I like to put a [monkey] wrench in things.” 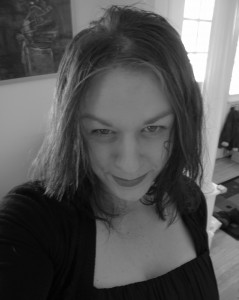 Buffalohead has a lot of scope in which to throw the occasional wrench. She enjoys the rare good fortune of being able to support herself through her art. Represented locally by the Bockley Gallery in Minneapolis, she says simply, “I manage to sell a lot of work.”

As for the future of her art, the one thing she’s sure of is that it won’t be like the past. “I would like to explore sculpture and installations,” she says. “I don’t want to do the same work over and over again.”