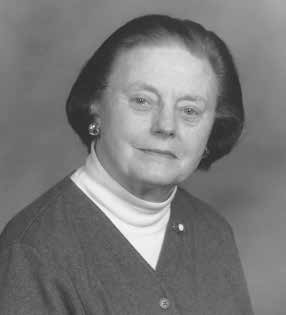 Marion Watson, 97, who lived in St. Anthony Park for 65 years, died March 28, 2020, at Episcopal Homes. She had been a code breaker for the Army, a radio broadcaster and civil rights activist.

Her mother, at age 19, had worked on the political campaign of Jeannette Rankin, the first woman to hold a federal office in the U.S.—an experience that no doubt influenced Marion’s own life choices.

Marion attended Central High School and graduated from the University of Minnesota with a degree in theatre.

After graduation, she enlisted in the U.S. Army as a code breaker during World War II, working on the effort for two years.

“This was an ultra, top-secret post using both military and civilian personnel where we worked on the Japanese codes,” she said in her memoirs. “On one occasion, a code book was captured after it had been partly burnt. I was assigned with four others to piece together the pages with tweezers and then we photographed the results.”

Her battalion received a Presidential Unit Citation for its contribution to the war effort. Watson left the Army with a T4 rank, which is a sergeant with a technical rating.

She met her husband, Harold Watson, at the U of M after they both returned from active duty. He co-founded the E&W Optical Co. in Minneapolis where he sold and repaired telescopes.

They married in 1946 and went on to have three children, Lisa, John and Danie.

Marion was station manager at the University radio station KUOM (formerly WLB and now better known as Radio K) for three decades, where she taught students, acted, directed, operated the sound equipment, wrote scripts and became the president of the WLB Radio Guild.

She was a strong advocate for civil rights, pioneering programming for American Indians, Hispanics, African-Americans and women. She became program director and station manager in 1969, one of only three female public radio station managers in the country at the time and the only one at a Big Ten school.

Marion was active in the civil rights movement. She served as legislative chair for the League of Women Voters of Minnesota, legislative co-chairwoman of the Minnesota Council for Civil and Human Rights, president of the St. Paul YWCA and sat on the Minnesota Indian Affairs Commission and the Minnesota Pollution Control Agency’s citizen board.

She wrote two books, “Indians in Minnesota” and “Women in the Labor Force.” In 2008, she was inducted into the Minnesota Broadcasting Hall of Fame and given the “Distinguished Service Award.”

She retired from the U at age 70 and spent her golden years participating in the League of Women Voters and a book club at Unity Church in St. Paul, where she was a member. Marion was preceded in death by her parents and her husband. Due to the coronavirus pandemic, a memorial service will be held at a later date.