When the so-called Surly Bill became law in 2011, micro-breweries began selling pints of their own beer onsite, fanning the flames of an already rapidly growing craft beer fervor in Minnesota. In 2014, the craft distillery business got a similar boost when the new omnibus liquor bill allowed small batch distillers to open cocktail rooms and serve concoctions made with their distilled spirits.

The craft beer and spirits wave is hardly a passing trend. Breweries and distilleries have continued to open to mass crowds, with apparently insatiable appetites for locally crafted booze and brews. St. Paul neighborhoods have welcomed several new tap rooms, including Bang Brewing at 2320 Capp Road and its neighbor Urban Growler 2325 Endicott St. in St. Anthony Park; Bent Brewstillery at 1744 Terrace Dr. in Roseville; Lake Monster Brewing at 55 Vandalia St.; and more recently BlackStack Brewing on Prior Avenue and Dual Citizen on Raymond Avenue, just south of University Ave. Studio Distilling, 2380 Wycliff St., just off Raymond in St. Anthony Park, is the second distillery in St. Paul. The distillery opened its doors for bottle sales of its rye malt whiskey in July.

While a handful of breweries dot St. Paul’s landscape, only two distilleries call it home. For the most part, it’s about cost. “This is how I explain it to my daughters,” said Phil Steger, Como resident and owner of Minneapolis’ Brother Justus Whiskey Company.“A distillery is a place where we make beer, turn the beer into a cloud, make the cloud rain, catch the drops and put the drops in a barrel. What we take out of the barrel is transformed into whiskey. So a distillery has to have everything a brewery has, all the brewing and fermenting equipment to make beer, plus we need to have stills that turn the beer into the cloud and back into liquid again. We keep paying bills and paying for production and operations while we’re waiting for the whiskey to mature.”

Distilleries are also more regulated than breweries. Unlike the trendy process of turning a home-brew passion into a business, “it’s a felony to home distill,” Steger, a lawyer by day, explained. “We also can’t self-distribute the way breweries can. It’s uphill and against a headwind, but we believe we’ve got a unique Minnesota story to tell and a uniquely Minnesotan whiskey to introduce to the world, so it’s worth it.”

With so many choices, how do you choose where to sip and nosh? Each spot has its own charms. In addition to crafting artisanal spirits and small batch beers, there is plenty of food choices to be had, either created in-house in Urban Growler’s full kitchen or via a rotating line-up of food trucks. During the summer months, many local breweries offer plentiful outdoor seating, outdoor games and live music. Kids and pups are welcome in most.

What does the future hold for craft brewers and distillers? While the original wave could wind down, due to the perception of market saturation and the challenges of raising capital, the appetite for locally made products is strong, according to Joe Falkowski, a Falcon Heights resident and market manager at Lift Bridge Brewery in Stillwater, Minn. “I think the boom will slow, but I don’t really think we will lose drinkers,” he said.

We’ll drink to that. 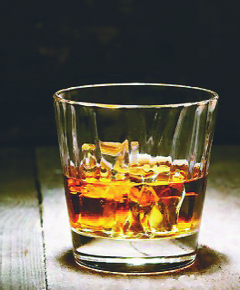 Steger of his college days at central Minnesota’s St. John’s University. “Minnesota has everything my tour guide had been telling me made Kentucky ideal and unique for making whiskey: great soil, grain, oak, water and extreme seasonal temperatures for barrel aging,” Steger remembers thinking. “We have great communities of and support for craft. So why didn’t Minnesota have a great whiskey tradition? The seed was planted then and there to try to help build one.”

Steger’s dream of making whiskey here remained through the years, and while researching the process, he found the book “Minnesota 13: Stearns County’s Wet Wild Prohibition Days,” by St. Cloud State University professor Elaine Davis. “It turns out Minnesota has a great whiskey tradition. It’s just that it was completely illegal,” Steger said.

Minnesotans in the St. Cloud area started making whiskey during Prohibition as a way to make ends meet. At the center of it all was a St. John’s monk who believed farm families had a right to make whiskey to support themselves, but they had a responsibility to make their whiskey right.” The rebellious monk’s name was Brother Justus. He built high-quality whiskey stills in the monastery workshop and taught local farmers how to make pure whiskey cuts. The moonshine farmer’s made using Brother Justus’ stills became Minnesota 13, the most coveted moonshine in America during Prohibition. Inspired, Steger began plans to open a whiskey distillery in the Twin Cities.

This summer, Steger and partners open the doors to their subterranean distillery in Northeast Minneapolis, where brewer and distiller James Jefferson tolls over a gorgeous copper still nicknamed Bill the Still, producing a single-malt silver whiskey and a single-malt American whiskey. There are plans for a cocktail room in the distant future. Steger and team are working to perfect recipes before introducing them to the public. “We wanted it to be low cost, our proof-of-concept phase. We need to build a new distillery to scale up, and we’ll have a cocktail room in it,” he said.

And the dream continues to grow.