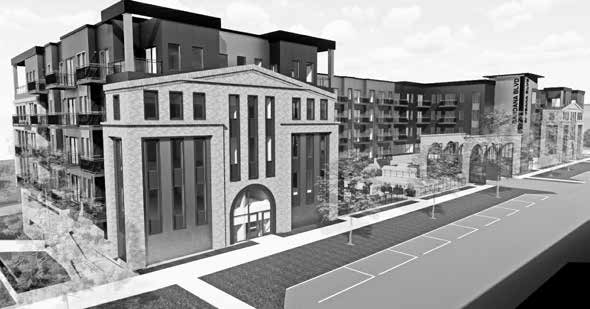 A St. Paul developer is proposing a four-story, 150-unit apartment building atop the existing parking ramp west of the Best Western hotel in Bandana Square.

The market-rate apartments would be a mix of studios, alcove studios, one-bedroom and two-bedroom units with none larger than 1,000 square feet, said Jim LaValle, principal for TJL Development LLC.

Early designs show a 60-foot-tall, E-shaped building. LaValle told the District 10 Land Use Committee that rents will be “competitive” with other apartment communities in Energy Park.

The proposed project would provide secure underground parking for tenants and lease 150 public parking spaces back to the hotel. The parking arrangement means the project would need to be rezoned from B3 commercial to T3 traditional.

A hearing before the city Planning Commission’s Zoning Committee was scheduled for March 26.

Hmong College Prep Academy, 1515 Brewster St., expects to build a new middle school and outdoor playground beginning this July on land it owns southwest of Brewster and Pascal streets. A skyway over Brewster would connect the three-story addition to the existing buildings.

Officials at the K-12 charter school say current enrollment of 2,350 pupils is about 150 over capacity. The proposed project would expand capacity to 2,400 students.

The new building will have 42 classrooms and a gymnasium. Related construction will eliminate some classrooms in the current buildings in order to expand the cafeteria, add more commons space and expand administrative space.