The facing material on the upper part of the structure is heat-treated white pine, harvested from state forestland in Cass Lake and processed by a Duluth company. Lower portions of the new Bell are clad in a formulation of Iron Range steel. Photo by Kristal Leebrick

Work on the new Bell Museum and Planetarium—inside and out—continues apace, with the building on schedule to open in summer 2018.

Although $64 million, the bulk of the funding for the facility at Cleveland and Larpenteur avenues in Falcon Heights, was provided by the 2015 Minnesota Legislature, a two-prong effort is under way to secure money for expanded programs and associated operating costs.

A capital campaign that began a year ago has raised nearly two-thirds of its $15 million goal, according to Denise Young, the Bell’s executive director.

“Since groundbreaking, we have had great success in fundraising for a number of areas such as the education wing and outdoor learning landscapes,” she said. “Our primary focus is funding exhibit enhancements, new technology and longer term programming support to bring the building to life.”

And University of Minnesota lobbyists and Bell representatives are back at the Legislature, seeking $7 million over the coming biennium for a facility that they contend will have a statewide impact.

“Over the past two fiscal years, nearly every visit to the museum in Minneapolis was matched by outreach—science education and related activities—to schools and communities across the state,” Young said. “And we plan to continue this trend going forward.”

The prospects for the Bell appropriation were uncertain as the Park Bugle went to press.

Also in the proposed bonding bill are funds for a new College of Biological Sciences plant conservatory on the St. Paul campus. (You can read about that in the May 2016 Park Bugle in the Back Issues section at www.parkbugle.org.)

In the meantime, some innovative exterior features of the new museum and planetarium, several of which celebrate the state’s historically important resources, are worth noting.

For example, a major portion of the facing material on the structure is white pine, not traditionally used in outdoor architectural applications. The wood, heat-treated to withstand the elements, was harvested from state forestland in Cass Lake and processed by a Duluth company. The installation is believed to be the largest of its kind in the country.

Lower portions of the new Bell are clad in a unique formulation of Iron Range steel. The alloys form a protective surface layer that resists atmospheric corrosion and forms a stable rust-like appearance over time.

Another of the building’s features has to do with protecting inhabitants of the natural world, namely birds.

The original design for the new Bell, generated well over a decade ago, called for large amounts of reflective glass, which critics contended would confuse birds, causing them to crash into it. (More recently, the same criticisms have been leveled at U.S. Bank Stadium in Minneapolis.)

Through a consultative process in the intervening years, however, the design was modified to reduce the amount of glass and make it safer for birds.

Patterns have been applied to the glass that appear to the human eye as either horizontal lines or dots, but birds see them as obstacles and are diverted away.

Inside the new Bell, said Young, exhibit installation is set to begin later this summer, including 10 of the large dioramas that were such favorites at the old building.

“Disassembly, cleaning and other restoration work has been progressing well since we closed our galleries on the Minneapolis campus last December,” she said.

The main entrance to the new Bell will be on the west side of the building, with access from the parking lot off Larpenteur Avenue. There will be a drop-off zone for school buses on Cleveland Avenue.

The executive director of the Bell Museum and Planetarium is a veteran university-based museum and planetarium administrator formerly associated with the University of North Carolina at Chapel Hill. 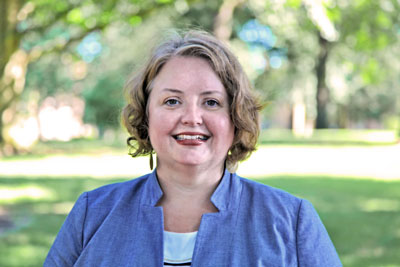 Denise Young, director of the Bell Museum and Planetarium

During Denise Young’s term as director of education and planning for the Morehead Planetarium and Science Center, science center attendance nearly doubled and philanthropic support increased exponentially. She also co-founded the North Carolina Science Festival, a multi-day celebration showcasing the educational, cultural and financial impact of science across the state.

Young holds a doctorate in education from Chapel Hill, a master’s degree in school administration and educational leadership, and a bachelor’s degree in early childhood education.