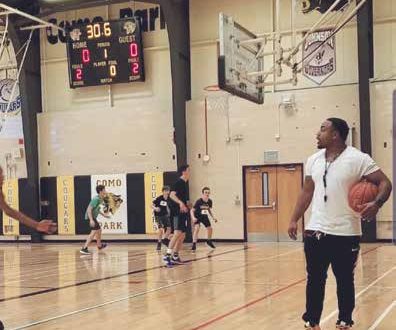 Donnell Gibson’s life’s mission is to inspire and motivate the next generation. As the new boys’ basketball varsity coach at Como Park High School, he has a new program to help guide kids along a positive path.

Gibson has been a behavior intervention specialist and an assistant coach for Cougar boys’ basketball at Como since 2014. Known as “Mr. D” or “Coach D” around Como, Gibson’s work extends beyond the school walls.

In 2015, he established The Gibson Foundation with the vision of creating spaces and opportunities that positively impact youth. Now, the new responsibility as a head coach gives Gibson another tool to construct a safe place for kids who may be challenged by an uncertain future.

When a student at Johnson High School on St. Paul’s East Side, Gibson endured periods of homelessness after the grandmother he had lived with passed away. With his father in prison and his mother struggling with drug addiction, Gibson needed to find trustworthy people and resources to help meet the challenges confronting him and his younger siblings every day.

Being part of a team connected to the school community—with adults responding to and advocating for him—gave Gibson the boost he needed to stay in school and graduate from Johnson in 2004. In his senior year, Gibson was a key player on the first Johnson boys’ basketball team to qualify for the state tournament in 80 years.

The resiliency, self-efficacy and leadership that Gibson developed during his teenage years is what he wants to instill in the young men he now coaches at Como.

While every kid in the Cougars program is unique, Gibson knows that many of his players are underserved youth, who have experienced or are now dealing with similar life challenges.

Consequently, Gibson’s basketball program at Como isn’t limited to practices and games. Instead, it’s a support network for academics and personal issues, with accountability and love—like a family.

“With basketball, we teach life,” Gibson said. “First and foremost, we want them to feel our program’s a safe place. In that safe place, they’ve got the chance to capitalize on everything. That’s knowledge, basketball, communication, interaction with other adults and other students.”

References to “we” and “ours” reveal that Gibson isn’t working alone. Kristy Pierce is the academic advisor, a role she created with former boys’ coach John Robinson several years ago. Pierce collects daily monitor sheets for players on the boys’ and girls’ teams and supervises the Student Athlete Academic Support Center every day after school.

The kids just call it “study hall.” It’s the time and place for homework, with resources and peer tutoring available for two hours before hitting the hardwood for practice.

The players are buying into the message of family. Pierce clarifies that they are modeling family in a “healthy non-dysfunctional” way—one with accountability and love.

Elements of that love include positive talk, listening and support for each other—on and off the court. Improving communication and relationships among players in study hall is carrying over to more trust on the court.

“It’s starting to sound like music in the gym,” Gibson said.

With two seniors and three juniors, and only one returning starter from last season’s team that finished 6-21, winning games this year may prove difficult. And Gibson is taking a measured approach to win-loss stats.

“Basketball will always be basketball,” he said. “Results will come. It’s definitely about the process. If our next game is better than our last one, that’s all we can ask for.”

Tyroun Sain, a senior guard for the Cougars, is receiving high praise from his coach and academic adviser. The lone returning starter, he’s learning how to lead and has become a role model to younger players.

Evan Lee is the other senior, and juniors Isaiah Long, Jahrese Adeagbo and Keith Deal round out the upperclassmen.

Meanwhile, the junior varsity team is coached by Darius Cambell, who also works at Como as a teaching assistant. The freshmen coach is Isaias Menase. Along with Undre Ellis, they assist the varsity team in addition to coaching their younger teams’ practices and games.

Pierce, the academic advisor, sees a collective spirit moving among the coaches and players on all levels across the basketball program. “The idea of service over self is working,” she said. “Everyone is giving of themselves and buying into what the coaches are instilling in them.”

As for long-term goals, Gibson’s vision for what Como basketball can be is clear.

“We want them to will their way to success,” he said. “I believe we can create a new generation of the next heroes. They may not wear a super suit, but it may just be the next group of mentors. The next group of student athletes that can come back and tell somebody, I was once you. That’s a hero in my eyes.”