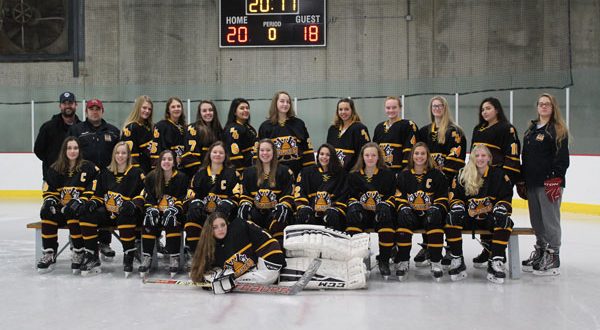 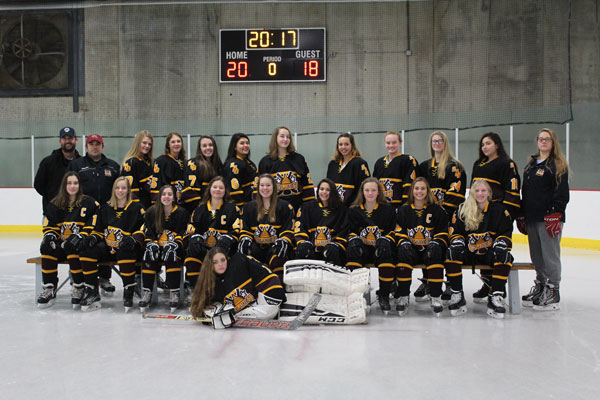 The St. Paul Blades hockey team brought together 19 girls from five schools for the 2017-2018 season. A new permanent sheet of home ice at Oscar Johnson Arena has players, parents and coaches excited about the future. Photo by Veronica Sannes

A few dozen other young girls in St. Paul frequently spend time on the city ice rinks, having fun playing for their local park or association teams. The older girls in St. Paul Public Schools play for the Blades, and they are connecting with the future of the program as much as possible, back on the same ice they first learned the game.

The Blades face tough competition in the high school league, playing against deeper and often more experienced rosters. The wins were hard to come by this season, but the effort stayed strong – and extended into hundreds of collective volunteer hours and community outreach.

“We really try and make it a point to give back to the places we come from,” Blades co-head coach Ryan Paitich said. “Being a team filled with girls from different youth programs, it’s nice to give back. We spend time with the Highland and Como/Johnson youth programs. We also try and get girls out to skate with the St. Paul Hockey Club. We try to get out as much as possible to show our appreciation to the parties that helped our girls get to where they are now in hockey.”

Each Blades team member has a goal of volunteering eight hours of her time to coaching young girls on the ice during the season. Captains help with sign-ups and transportation. Parents help, too, and are generous with team meals before games and events. The shared spirit of service has an additional benefit: bonding time.

“I was lucky enough to make some of my best friends on the Blades,” senior captain Eliza Donnelly explained. “Each one of the girls is an incredible addition to the wonderful team dynamic. I feel so lucky to be close to my team, spending almost every day with them really brought us together. We became a family, and it was great to have that relationship with them.”

Donnelly was one of three seniors, along with Larissa Lopez, and standout goalie Taylor Nelson, whose athleticism and quick reactions secured two victories and kept many games close.

With such a young team, Paitich and co-coach Tim Blase knew the schedule would be challenging. “From the first day of practice to the last day of practice the amount of knowledge and skill development improved greatly. The attitude we brought to the rink on a daily basis was great to see considering we did not win a lot of games,” Paitich said.

“We really became a family by the end of the season and hopefully that will carry into this summer and the start of next season.”

Volunteering and outreach will continue this summer, as will team and individual workouts. While most of the girls are multiple-sport athletes, they’ll lead a hockey camp for middle-schoolers July 16-20 at Drake Arena, 1712 Randolph Ave., St. Paul. The $85 fee includes a jersey. You can find more information and registration forms at www.spps.org/sports under “Girls’ Hockey.”

When the 2018-19 season rolls around, the Blades will be using their new permanent home ice at Oscar Johnson Arena. For St. Paul hockey people, “OJ” is a well-known rink.

Thanks to Ramsey County and Hamline University, the Blades moved into OJ in December and are now the primary tenants. Hamline moved to downtown St. Paul to the new Tria Rink, but left the locker rooms at OJ intact for the Blades.

With the new rink and committed coaches, the Blades program can grow. Paitich and Blase are passionate about hockey, but more important, they take pride in helping each individual improve as players and people while creating a positive team culture.

“My coaches work very hard to make each player feel included. It is very clear that they care about each of the players.  They dedicate so much of their time to us, and it means a lot,” senior captain Donnelly said.

With 16 skaters who have already developed chemistry with one another on and off the ice returning to next year’s team, there’s another reason to be optimistic about the future.

“We have potential, and we have some talent that will be getting stronger. But more than that, we have fun playing the game, and we really support each other. It’s fun to play with girls from different schools and represent St. Paul,” junior captain Gabrielli said.

What’s needed to fully realize the long-term potential are more girls playing hockey and more girls choosing to be part of the St. Paul Blades cooperative team. Expenses are a concern to many, but access to skates and neighborhood rinks are increasing as leaders, including the Blades, reach out to involve the community.

In the capital city of the State of Hockey, there is an awesome opportunity for girls to access a special sport to Minnesotans, whether it’s carrying on a family tradition or being a first-generation player.

“It is really important to keep girls’ hockey alive, especially in the cities,” Donnelly added. “There is no sport like hockey, and it is never too late to play!”