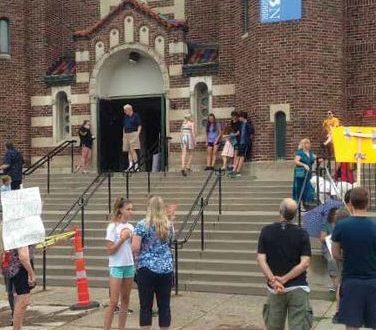 TCGIS officials hope to have their new $6 million building completed for the 2020-21 school year. They obtained a demolition permit in late July from the City of St. Paul and the church building teardown was expected to begin the week of Aug. 12 as the Bugle went to press

The calm before the wrecking ball finally came after a neighborhood group called Save Our Historic St. Andrew’s lost its battle to preserve the former church as a historic structure. They waged their fight in City Hall and local district court over several months before ultimately failing in mid-July to post a $1.9 million security bond to continue on their legal challenge. Through the many months, the fight sparked some hard feelings.

“We wanted to provide the opportunity for closure for all neighbors, school families and the greater community,” Julie Alkatout, TCGIS board chairpersons, said about the open house. “I am hopeful that we will be able to mend relationships.”

For his part, Fauskee appreciated the gesture. “Thanks for doing the open house,” he told Alkatout. But across the street from the church building, protesters held placards that implored school officials to reverse course and not raze the former church building, which the school converted into a gymnasium.

“We are very sad,” said Dianne Miron, who grew up in the Warrendale neighborhood and went to school at the church. “They are tearing down something culturally important to this neighborhood.”

That preservationists battled so long and hard to save the church reflected in its long-standing importance in the community. The Bugle reported in May 2018:

“The three-towered church, with its Byzantine-Romanesque exterior and terra cotta roof, has been a landmark in the Warrendale community since it was built in 1927 — 32 years after St. Andrew’s Parish was established in 1895. It was the home of St. Andrew School until 1989, when Maternity of Mary and St. Andrew schools merged and moved to 592 W. Arlington Ave. St. Paul Public Schools leased the school building for many years and its French immersion school, L’Etoile du Nord, was in the building until 2011.

St. Andrew Church stayed on until it merged with Maternity of Mary Church on Dale Street. The last Mass was held on June 12, 2011. Two years later, TCGIS Building Co., bought the church and school building from the Maternity of Mary Parish, and leased it to TCGIS. (Charter schools are publicly funded, and under Minnesota law these schools cannot use public funds to purchase facilities from which they operate.)”

Meanwhile, the TCGIS’s building plans came after a year of study, which included looking at buying or leasing additional space, having a split campus or building a new structure at the current site. The public charter school, which moved into the site of the former St. Andrew’s parish in 2013 with 330 students, has seen its enrollment increase to 555 in five years—and it’s expected to grow to more than 600 by 2021.

“I know the [church] building is important to a lot of people,” said Shelley Parker, who has a son attending TCGIS. But she added that, after seeing various school groups study the issue, “there was no way we could save it.”