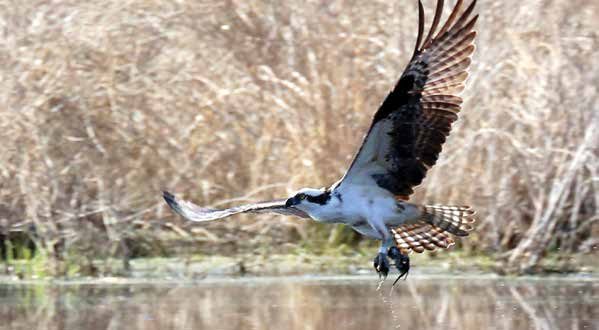 On a Monday morning in August, I was birding with friends at Grass Lake in Shoreview when we saw some 20 cormorants perched in the branches of a skeletal tree across the lake.

The big, black birds resembled vultures waiting for a victim, but cormorants are fish eaters. They may have been discussing where to try this morning, or waiting for the water to warm a bit.

Suddenly, an osprey flew by with what looked like a sunfish in its talons. The osprey is a very large bird with wingspans that can range from 4-and-a-half to 6 feet. It is brown above, white below, with a brown mask that extends through the eyes toward the back of the head. It flies with its wings bent into somewhat of a W formation. At a distance, it looks more like a large gull than a hawk.

Like the cormorants, ospreys are fish eaters, but they don’t swim along the surface like cormorants. Ospreys hover over the water until they spot a likely meal, then dive feet first into the water. They can snatch a fish up to 3 feet below the surface. Once they have a fish in their talons, they align it so that its head is forward, making it more aerodynamic as they fly back to their nest or a nearby perch to eat their catch.

As we watched, a second osprey appeared over the lake. I initially thought it was the mate of the one we’d seen with the fish. But soon, a third osprey was hovering above the lake! An offspring of the other pair? It was spectacu­lar to see three ospreys at a time over an urban lake.

One of the ospreys did something I had never seen before: It flew very low over the lake for quite a distance, just skimming the surface of the water with its talons, dipping them a few times, gliding on, and then dipping again.

I checked some of the literature, and some observers think the ospreys are trying to lure fish up to the surface. But I didn’t think that made sense. Any fish lured to the surface would be behind the osprey, not an easy catch.

Another explanation is that the bird is cooling off. Their feet have a great deal of vascularization, so the blood would be cooled by dragging the feet through the lake. This behavior has been observed on hot days, but this day was relatively cool. So I discounted this reasoning as well.

More likely, as my buddy, Val, suggested, the bird was rinsing its feet. It’s messy business to eat a fish with talons and a beak, so in order to wash off innards, scales and such, a quick rinse in the lake would help.

Osprey feet are pretty special and it’s probably important to keep them clean. The front toe of their foot is double-jointed and can be moved to create a cross formation with the back toes. This gives them a good grip on the fish. Osprey feet snap shut in two-thousandth of a second! Not much time for a get-away.

The backsides of the osprey’s toes have gripping pads covered with little spikes called spicules, which help them hang onto a slippery, wet fish. They also have some very business-like talons, not grooved like other birds of prey, but fully rounded providing more gripping surface.

Generally, ospreys like their nests up to 60 feet high, beyond the reach of prowling predators. But look at the list of the places where osprey nests have been found: on “dead snags, living trees, utility poles, duck blinds, fishing shacks, storage tanks, aerials, cranes, billboards, chimneys, windmills, fences, and channel buoys.” This list is from Peterson Field Guides “Eastern Birds’ Nests,” by Hal H. Harrison. I can add athletic field-light poles to the list. And, of course, nest platforms put up for the purpose of attracting nesting ospreys.

Nests are often used from year-to-year, added to, and can reach 10 feet in diameter. They’ve been found to contain a variety of interesting items: “John Steinbeck found three shirts, a bath towel, an arrow, and his rake in the nest in his garden. Also seen in nests: rope, broom, barrel staves, hoops, fishnet, toy boat, old shoes, fish lines, straw hat, rag doll, bottles, tin cans, shells, sponges, etc.,” according to “Eastern Birds’ Nests.” The osprey parents made sure the kids had lots of things to play with!

I felt fortunate to see three ospreys at the same time. Your best chance of spotting an osprey is over the lakes of the Three Rivers Park District in Plymouth. In 2018, surveyors found 136 nests in the metro area, 75 on platforms.