Most of the existing interior will be remodeled, but Principal Ann Eaton Johnson wants all past and present families to know this: The mosaic in the school’s front entry of the beloved Langford Park spider tree, created and installed by mosaic artist and parent Holly Jordan, art teacher Courtney Oleen and many volunteer parents in 2006, isn’t going anywhere.

“It will stay intact. We are not touching it,” Johnson said.

Representatives from St. Paul Public Schools (SPPS) and Cunningham Group Architecture presented the schematic design to the St. Anthony Park Community Council on Sept. 8 and at the school on Sept. 19.

The plan is to remove the two portable classrooms at the south end of the school, expand the second floor and add 7,421 square feet of classroom space to accommodate four classrooms in each grade, K-5, and add 935 square feet for a new kitchen and loading dock. The designs also include a new front entrance and a new assembly space.

The elementary school was built in 1953 and an addition was constructed in 1974.

St. Anthony Park is a popular school in the district and over the last few years has had a waiting list of students. Enrollment was at 523 students last school year and in the spring 89 students were on the wait list to get in this fall. (Enrollment numbers have not been finalized this fall.) 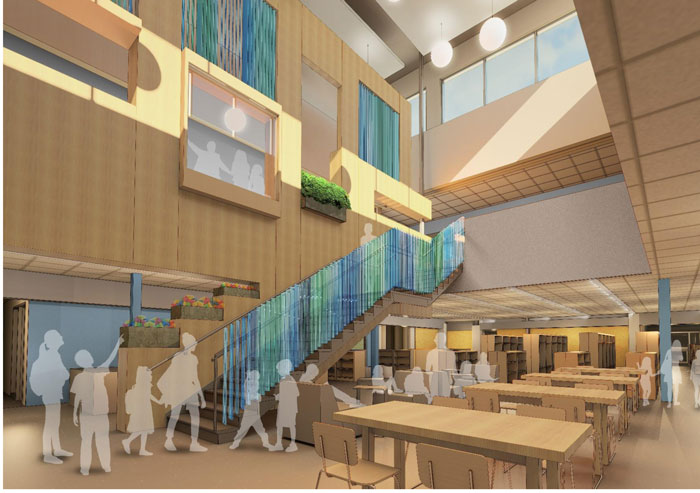 The interior of the school will be extensively remodeled. Shown here
is the schematic design of the media commons in the center of the
building. Adding more natural light to all areas is a key part of the
redesign. Cunningham Group Architecture

In 1995-96, enrollment at St. Anthony Park was at an all-time high of 670 students. In 1996-97, enrollment decreased to 628. Over the next few years enrollment continued to decrease, reaching 374 in 2005-06. In 2006, the year that SPPS instituted free full-day kindergarten at all district schools, the enrollment began to increase.

Since the 2010-11 school year, the school has accommodated more than 500 students each year. The district has set the enrollment cap after the remodel at 640.

St. Anthony Park’s redesign is part of a $484 million five-year plan to upgrade and build in the district. Building construction funds represent 4 percent of the district’s overall budget. By law, building funds—which are funded through the sale of bonds, capital loans or the Alternative Bonding Program— cannot be used for other funding categories such as the general fund,which pays for teacher salaries, transportation and other teaching and learning needs. Increases to the building construction funds do not decrease the general fund, according to the SPPS website.

Construction will begin in June at the end of this school year. Some work will be done while school is in session in the 2017-18 school year, Johnson said, but there will be no work done during the school day. The project is expected to be completed at the end of summer 2018. Find out more at www.spps.org/Page/23085.