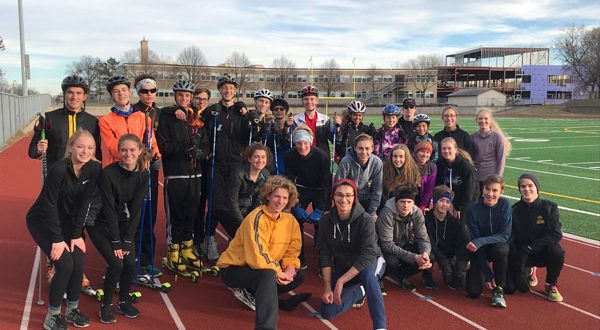 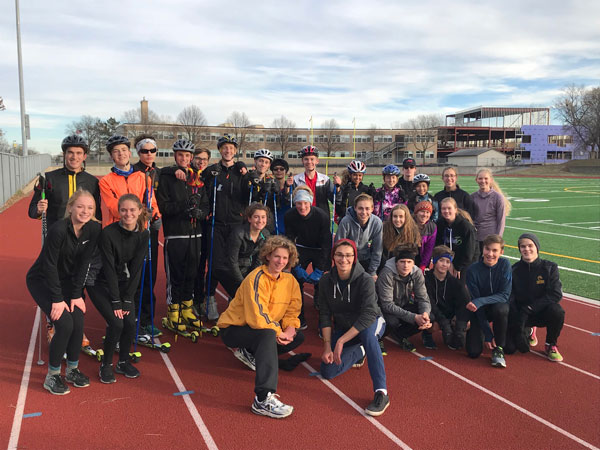 The Nordic ski season for high school teams across the state officially began Nov. 13. As of Dec. 13, the Como Cougar Nordic skiers had yet to ski on snow, which, after all, is pretty much the point of Nordic skiing.

An icy mix in early December topped off with flurries covered the ground in white, but the snow pack required for skiing in St. Paul was not sufficient.

The circumstances create a bit of a conundrum for coaches and captains. How should skiers practice skiing when they can’t ski?

“It’s like the basketball team having practice every day, but they’ve deflated all the basketballs,” quipped senior captain Dominic Wolters.

Seniors Gabe Reynolds, Eli Pattison and Eva Hanson are also captains. They share the sentiment. Nevertheless, they know there’s not much they can do. When there is enough snow, their fitness needs to be at a high level.

All the captains, plus a majority of the 30 team members, are crosscountry runners in the fall.

“It’s a lot of running when there’s no snow, and some people get a little tired of that after many months, but endurance is very important to Nordic, so it’s still helpful to get us ready,” Hanson said.

“I’m not bothered by dryland training, but it is a bit tricky to try and maintain team excitement when we’re not actually doing the sport we signed up to do,” Pattison added.

To mix things up and avoid monotony, dryland training activities have included spirited games of soccer and Ultimate Frisbee. Skill levels and passion for those forms of cross training vary, but the camaraderie of the team keeps things fresh.

Another element to team chemistry is pasta. Team bonding over pasta dinners is a tradition carried out the night before every race. Or more accurately, every scheduled race.

While lack of snow may cancel a meet, it doesn’t stop Como Nordic skiers from feasting together on carbs the prior evening. Pattison and Reynolds explained, with a smile, that they wouldn’t want to miss their carbo loading.

When spending time around the Cougars’ skiers, it’s difficult to not be impressed with the attitude, maturity and pleasant spirit they demonstrate. Those traits are greatly appreciated by Como head coach Sasha Van Voorhis.

“It’s a really smart group of kids. It’s nice not having to explain every decision we make. They understand why we’re running. You definitely get committed kids when you’re only skiing a third of your actual season,” Van Voorhis said.

Van Voorhis is an accomplished skier with deep knowledge of technique and equipment. He is well-connected in the larger Nordic ski community and enjoys the supportive relationships.

Van Voorhis grew up in St. Paul and attended Central High School. He was on the ski team there and in college. After schooling and work with the forest service, he returned to Central and served as the assistant coach. The head coach was his father-in-law, Robb Lageson.

After five years as an assistant, Van Voorhis applied for the head coaching position at Como when it opened up in 2015. While taking the job at Como may have split up the daily family gathering, a partnership of sorts between the Central and Como Nordic teams blossomed.

The two teams now take an annual trip together over winter break to the Upper Peninsula of Michigan, where a deep snow pack is virtually a guarantee in late December.

“It’s visually stunning. You’re going through the north woods of the Upper Peninsula, and it’s an opportunity to get closer to nature, and to get closer to your teammates in a setting that inspires introspection,” Wolters explained.

Three days of training in a spectacular environment with two nights of bonding and laughter shared by integrating students from two St. Paul schools has certainly stood out as a peak experience for past participants. The dates of Dec. 27-29 are already eliciting excitement, as this year’s teams anticipate the event.

When the calendar turns over to 2018 after the winter break, the Como Nordic team hopes it will be resuming workouts on the Como Golf Course. The urban gem just across the lake from school is an ideal spot for skiing if Mother Nature cooperates with snow.

For assistant coach Dylan Adair, a science teacher at Como, interacting with the environment is a major benefit of Nordic. “You can tell [Adair is] passionate about the outdoors, and it’s cool to share in that love and passion for doing something that’s hard but rewarding,” Reynolds said.

While relatively new to skiing, Adair’s consistent support of each skier is a valuable asset appreciated by all. Reynolds and Pattison described how Adair always tends to those with an issue, injury or equipment need and hangs back with anyone having a challenging day.

Some describe Nordic skiing as a solitary sport. It certainly can be an isolated activity if desired and there are moments in each practice or race when it’s required. Oftentimes the competition is really against yourself, pushing to be your best and enduring all the challenges in order to cross that finish line.

However, without the network of support on the Como Cougars Nordic Ski team, it’s doubtful that dryland training, inconsistent snow conditions and sporadic races would be enough to attract 30 busy, talented, top students to commit their time and energy after school for three months.

It’s about the relationships. Relationships among teammates, between coaches and kids, and interaction with the outdoors are integral ingredients to the Nordic skiing culture at Como and in St. Paul.

As for the final ingredient, let it snow.