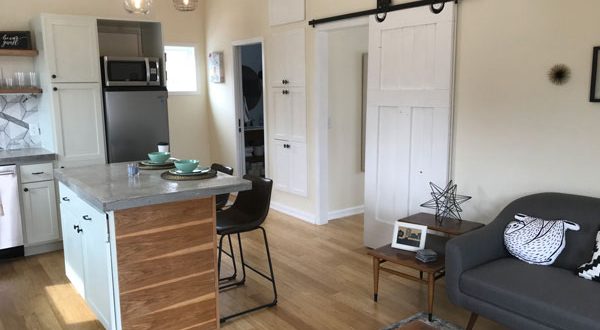 Over the course of a recent Saturday afternoon open house, more than 40 neighbors, friends and family stopped in to see a new apartment on Sherburne Avenue in the Hamline-Midway neighborhood and congratulate the owners, Eric and Chrissi Larsen, on its completion. This wasn’t just any apartment — it was the first accessory-dwelling unit to be built under St. Paul’s 2016 accessory-dwelling-unit ordinance. 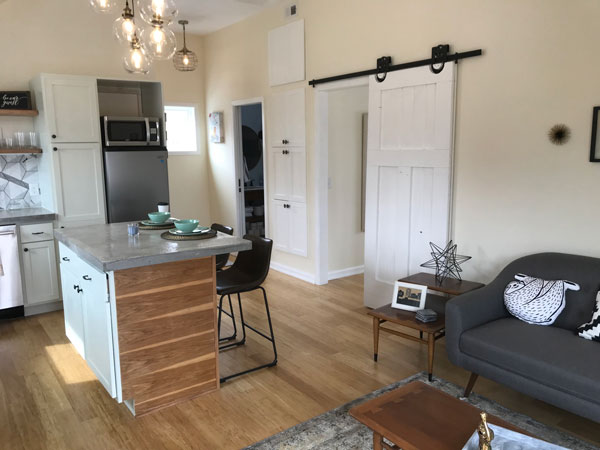 The Larsens’ 624-quare-foot ADU features a kitchen and living area, a bedroom and a bathroom. Photo by Eric Larsen

Accessory-dwelling units, or ADUs, are separate housing units added to a single-family residence, either inside the house (such as in an attic or basement), as an addition to the house, or as a detached structure built on the same lot. So far, ADUs are allowed in only a small part of St. Paul, located within a half mile of the Green Line, between Emerald Street and Lexington Avenue. This area includes all of South St. Anthony Park. (Minneapolis approved ADUs citywide in late 2014 and had permitted 92 new units through early this year, according to city staff. That number included 49 interior units, nine attached units and 34 detached ADUs.) 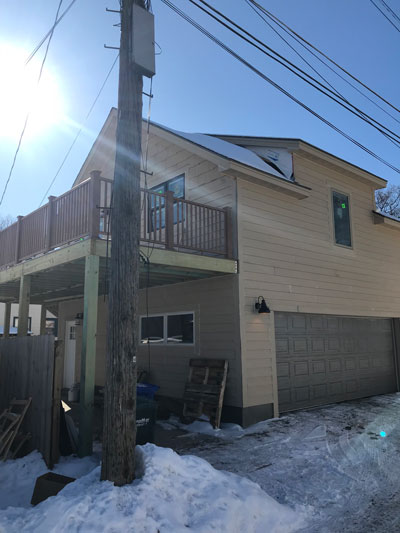 Eric and Chrissi Larsen accessory dwelling unit is the first to be permitted under St. Paul’s 2016 ADU ordinance. Photo by Mark Thieroff

The Larsens became interested in building an ADU when a friend contacted them in early 2017 to let them know ADUs were now allowed in parts of the Midway. The idea of building an additional dwelling to their property immediately appealed to them.

“We really like the idea of shared living spaces, and an ADU will allow us to do that while still having our own house,” Eric Larsen said.

The Larsens had a one-stall garage that needed to be replaced, so they built a larger garage with an ADU on top. After discussing approaches with an architect and jumping through the hoops of a permitting process that was new to city staff as well, they finally had their building permit in July and were ready to start work.

Perhaps unsurprisingly, the project was more complicated than simply building a new garage with a bonus room above it. Because the garage includes living space, the building code required a full foundation to a depth of 42 inches, rather than the concrete slab more typical of garages. A sanitary waste line also had to be installed from the garage to the street in front of the house. With little space between the Larsens’ house and their neighbor’s house, this line was installed through a horizontal drilling process that avoided the need to dig a trench.

Eric Larsen is an experienced builder and served as the general contractor and builder for the project, hiring out only the trade work, including the electrical and plumbing work. Chrissi Larsen handled the creative side of the project, including the interior decoration.

Inside the finished space, it is easy to forget it is above a garage. The apartment is a surprisingly spacious 624 square feet and consists of three rooms—a combination kitchen/dining area/living room, a large bedroom and a bathroom. A deck off the living room provides an additional 250 square feet for outdoor living in the summer, as well as an off-street parking spot underneath. The garage ceiling is insulated with spray foam to an R-30 rating, which largely blocks out sounds from the garage. Heating and cooling are provided by a high-efficiency ductless mini-split heat pump. The apartment also features a heat-recovery ventilator that provides fresh air without losing heat.

The Larsens were able to cut costs through their own efforts. Eric estimates the entire structure would have cost nearly $175,000 had they hired out all of the work. They plan to rent out the apartment, with the first tenant, a friend of theirs, moving in later this spring.

Meanwhile, the St. Paul Planning Commission is studying the possibility of expanding the ADU ordinance, either to include additional neighborhoods or extend it citywide.