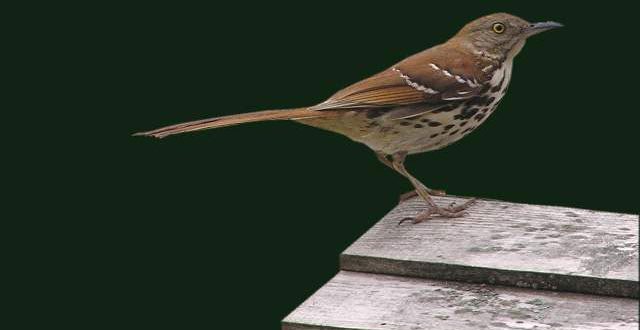 The key to spotting a brown thrasher is knowing its song 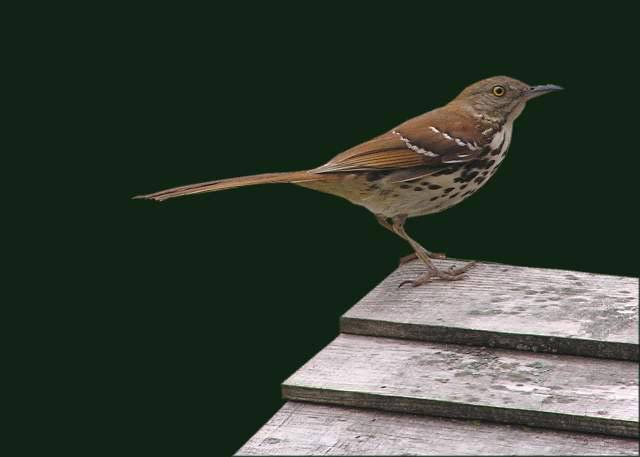 The brown thrasher is a handsome bird. Its rufous (reddish-brown) upper parts contrast with a milky-white underside, accented by heavy black streaks that look like chains of teardrops. It has a couple of white wingbars on each side and yellow eyes. The adult is about 11 inches long from the tip of its short black beak to the end of its long, reddish-brown tail. Male and female look alike.

Not everyone shares my impression of the thrasher. Author Pete Dunne, in his “Pete Dunne’s Essential Field Guide Companion,” says the bird’s expression is “nefarious” and that it has a “beady, pale, malevolent eye.”

I hope you’ll be able to observe one or more brown thrashers for yourself and see if you agree with me. It will take some work and perseverance to see a brown thrasher. As Dunne notes, “Thrashers don’t like to be seen.”

But if you are attuned to their song, you should be able to find one singing between mid-April and mid-June. The male usually sings from a high perch in his territory, and his song is loud and proud. The song is made up of shorter song units that he repeats in pairs or occasional triplets. Cornell’s Lab of Ornithology Birds of North America website estimates that the brown thrasher has more than 1,100 song types. This website also features photos, video and sound files. Singing tends to end when the birds are paired up and concentrating on raising their youngsters.

My son, Drew, and I were on a birding weekend one May on the grounds of the Villa Maria in Frontenac, down near Lake City, Minn. We were exploring a nuns’ cemetery when we heard a brown thrasher singing. It was at the tippy top of a tree on the edge of the cemetery. We listened to it sing for 15 minutes and, except for the pairs and triplets, it never repeated itself.

Actually that cemetery setting is more to the thrasher’s liking than an urban yard. They breed in riparian woodlands with cottonwoods and willows, woody draws and farmyard shelterbelts — trees or tall shrubs planted in a row to block the wind. They like an edge, shrubby habitat, often with an emphasis on the shrubbiness. They seem to favor dense, thorny shrubs that provide some protection from predators.

Brown thrasher courtship sounds kind of romantic. The female chooses the shrub where the nest will be built. As she hops about on the ground below the site, the male follows her, singing his same territorial song but at a whisper. It can’t be heard beyond a few feet, but she can hear it. And they exchange “nuptial gifts” with one another, leaves and twigs. Sweet!

The female will lay an average of four eggs that can range from pale blue or pale greenish blue to white. They’re heavily speckled with tiny brown or reddish-brown dots. The eggs are incubated by both parents for about two weeks. And after hatching, the young are ready to fledge within about 12 days. They grow up so fast.

Brown thrasher nests are often low in the shrubbery, sometimes on the ground. This can make them susceptible to a variety of predators from dogs and raccoons to other birds and even snakes. One birder found an empty nest with no visible signs of destruction except for a hole in the bottom of the nest.

The brown thrasher has long, heavy legs that are useful for foraging on the ground. It uses its bill to sweep the leaf litter and soil layer from side-to-side, looking for insects, berries and seeds. Leaves and twigs fly in all directions. I thought the thrasher got its name from this threshing/thrashing action, but the “Dictionary of Birds of the United States” by Joel Holloway, says that “thrasher” comes from the English thrusher, like a thrush.

At first glance, the brown thrasher can be mistaken for a wood thrush, a rusty bird with a streaked breast, but the thrush has a more upright posture and is chubbier. The thrasher tends to keep its body in a more horizontal position.

Thrashers eat insects, mostly beetles, fruit and nuts. They’ve been observed scraping a shallow hole in the soil, inserting an acorn and then striking it with their bill to crack the shell. Iowa thrashers seem to favor grasshoppers.

The summer range for the brown thrasher extends from the Atlantic to the Rocky Mountains and north into southern Canada. When fall comes, brown thrashers tend to migrate alone, not in flocks. Their winter range is the southeastern United States west to Texas and has extended in recent years all the way down to Miami.

To me, this bird’s song doesn’t have a nefarious note in it. It’s a great singer who likes its privacy.

Clay Christensen lives and writes in Lauderdale. His book, “The Birdman of Lauderdale,” is available at Half Price Books in the Twin Cities.