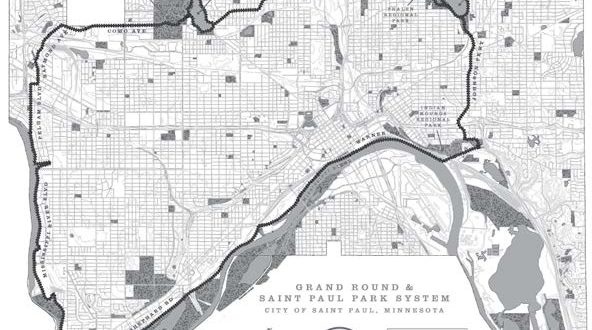 Tortoise and the Hare: St. Paul’s Grand Round Bike Trail

St. Paul’s commitment to a citywide “grand round” bicycle trail is nearing completion, an endeavor surprisingly more than 100 years in the making. And one that appears destined to cross the finish line before a similar bicycle system in neighboring Minneapolis.

St. Paul’s story dates back to 1870 when the University of Minnesota’s first president and librarian, William Watts Folwell presided over just a single building with an enrollment of 300 students, up from just 40 two years earlier.

As the president of a rapidly growing university, Folwell needed help—certainly with buildings but also designing the grounds too. For this, according local parks historian and author David C. Smith, Folwell wrote to Frederick Law Olmsted, the famous landscape architect who designed Central Park in New York City. Olmsted wrote back to Folwell with only “perfunctory advice” and showed little interest in a commission.

Two years later, when Folwell was called away to Washington, D.C., during a time he was scheduled to give a presentation to civic leaders in St. Paul, he asked another landscape architect who had once worked for Olmsted to give the talk for him.

His name was Horace W. S. Cleveland, and he held similar ideas to Olmsted about preserving and using the natural landscape in all his projects.

During this speech, Cleveland spoke at length about the importance of securing land for parks along the banks of the Mississippi River before quarry owners ruined one of the Twin Cities’ scenic wonders.

Cleveland also highlighted the lands around Lake Como and Lake Phalen, recommending he would “unconditionally recommend that you secure the control of the shores of both of these legs, and connect them with the city and with each other by avenues befitting the wants of the time . . .”

Cleveland was at the forefront of speaking forcefully not just in favor of building parks in the Twin Cities but building “park ways” which would connect areas and diverse neighborhoods.

Cleveland’s talk was met with great enthusiasm. He returned to St. Paul and completed two private projects a year later in 1873. (One was for a land development plan for St. Anthony Park ordered by former Minnesota Gov. William Rainey Marshall, who owned large tracks of land between Como Lake and Minneapolis.)

Due to economic conditions, there was a lull. But 10 years later, Cleveland returned to St. Paul to give a second speech. This time, Minneapolis moved ahead on his suggestions. They established a park board with Charles M. Loring as president. They hired Cleveland.

In 1884, Folwell stepped down as the president of the University of Minnesota and expanded his work in public life. In 1888, he joined the Minneapolis Park and Recreation Board, as well.

Although the term “Grand Rounds” appears in the Minne­apolis park reports as early as 1890, it was probably a bit later that the term coalesced into the bike/pedestrian/riding path that it is most famous for today.

In 1895, his first year as president of the Minneapolis Park Board, Folwell wrote, “It may be that the splendid scheme of Mr. Cleveland and Mr. Loring may never be perfected in all its details, but Minneapolis will never be satisfied unless it is executed in spirit and essential features . . . The “Grand Rounds” must be at length accomplished . . .”

In 1887, St Paul established a park board—five years after Minneapolis. It also hired Cleveland in 1888. In addition to Lake Como, the city acquired the lake and Phalen Park in 1889.

In 1898, in its seventh annual report, the Park Board’s commissioners wrote, they “have not been backward in recognizing the rapidly growing claims of the bicycle to the liberal treatment and hospitable accommodation of our system of parks and parkways. Bicycle paths have been provided for in the new improvement of Como Parkway and Como Boulevard, and will form a feature of Midway Parkway, and doubtless of all other boulevards and parkways which may be constructed hereafter by the board.”

A 1907 map shows both the established and proposed parkways necessary to achieve the vision of St. Paul’s Grand Round parkway system encircling the city.

After the turn of the century, however, St. Paul’s park board made some more progress but appears to have suffered from infighting and was unable to get its Grand Round done. Interest in the project waned until 2000, when a new master plan was created.

Finally, in 2016, then-St. Paul Mayor Chris Coleman announced the city would not only begin work but complete the missing (primarily northern) parts needed to connect the city with a coherent Grand Round trail of its own—more than 140 years after it was first proposed.

If most of the work is completed by the end of 2020 as planned, St. Paul should have its official continuous “Grand Round” bike loop ahead of Minneapolis, fully closing its own Grand Rounds loop—a true tortoise-­and-the-hare story.

For the intrepid rider, much of the St. Paul Grand Round course is ready to go. Look for the Saint Paul Grand Round logo as it appears on new signs, kiosks, trail markers and even manhole covers along the ride.

Exact progress of the unfinished portions, as well as maps of the course, can be found on the St Paul’s Parks and Recreation’s website under “Saint Paul Grand Round.” (Note: Construction is scheduled in 2020 for the part along Como Boulevard between St. Anthony Park and Como Park. For full details, see Grand Round Design & Implementation Plan on the city’s website.)

If you are looking for company on your ride, the popular cycling St. Paul Classic follows the Grand Round. This year ride is on Sept. 8, marking its 25th anniversary. More than 5,500 riders participated in last year’s ride.

—John Horchner is a publishing professional who lives in St. Anthony Park.