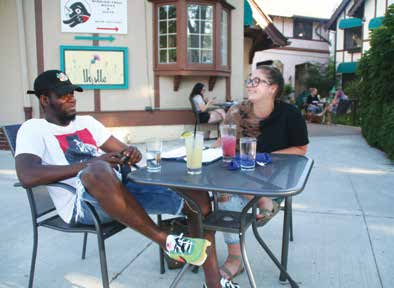 Jill Pavlak, co-owner of the Urban Growler Brewing Company in south St. Anthony Park, was looking forward to a record year back in January.

Then COVID-19 hit. Now, she has a message for her neighbors.

“If you want the places in your neighborhood to survive, show them the love,” she said. “Right now every single beer sale matters. This is not the time to drive miles and miles away to check out something new, not when your own neighborhood business is suffering. It’s that dire for all of us.”

Brewpubs, restaurants and coffee shops were already operating on thin margins before the governor ordered them shutdown in March. Although many have reopened, continued concern about coronavirus and a slow summer means survival for many is uncertain. Owners are waiting to see what the fall brings. Some say if indoor dining doesn’t return to normal they may not make it.

“What’s going to happen at the end of the summer? That’s what I think about every day,” said Jenna Victoria, who co-owns Nico’s Taco Bar on Como Avenue and another location in Uptown with her husband and two nephews. “It’s going to be all about where we are in the pandemic here in Minnesota and whether people are comfortable coming back inside.”

Nico’s and Urban Growler have been able to keep their doors open partly by capitalizing on outdoor space. Nico’s kept half the tables on its popular patio, spaced them apart and spread the rest around the courtyard of Milton Square. On a warm sunny weekend, every table is full.

“I think that probably saved us,” Victoria said. “There are people coming and it’s better than we thought it would be.”

The restaurant also put together some new take-out options, including tacos-in-a-box and margarita kits. But business is still down by half and very few people opt to sit inside, she added.

Urban Growler got city permission to expand the outdoor beer garden into its parking lot, but is not seating indoors and had to cancel events in the barrel room. They outfit servers with gloves and masks, ask patrons to wear masks when they’re up and about, use disposable cups and plates and seat people by reservation to manage the patron density.

On-site sales represented the bulk of Urban Growler’s business and they’re down 50 percent, said Pavlak, but canned beer sales in liquor stores are up 10 percent which helps the bottom line. She and her partner Deb Loch have been able to keep about 20 employees, compared to 45 last summer.

“It isn’t the same,” said Pavlak. “There isn’t that constant hum of chatter and laughter like we’re used to have. But people are coming in. Someone just told me, ‘thank you, this felt like a normal Saturday, finally.’ That’s what I’m longing for and what I sense other people are longing for too.”

Smaller restaurants with no outdoor seating are in a more difficult spot. With only 10 tables squeezed into a storefront in the strip mall on Energy Park Drive, Pho 79 decided not to reopen at all for in-person dining.

“Right now we’re only doing take out,” said owner’s son Andy Truong. We still don’t feel quite comfortable letting people inside.” Business overall is down by half, he said. “But we are lucky to be staying afloat, compared to some businesses.”

Cafe Biaggio is only doing about 20 percent of the business it did before COVID-19. Fewer diners are lingering over housemade pasta in the cozy art deco space on University Avenue.

“I’ve been cooking for 50 years and I’ve never seen anything like this in my life,” said co-owner John D’Agostino. He’s been able to bring back only six of his 18 employees and if things don’t look up by fall when his federal loan comes due he’s not sure he’ll make it.

One small bright spot has been summer produce at the farmer’s market. In late July, he bought a bushel basket of the first zucchini blossoms. “We stuff them with fresh mozzarella and we beer batter them and fry them and serve them with fresh sauce,” he said. “People go crazy for them. They call me in January and say, ‘Do you have the flowers?’ So, I’m hoping that will spur business.”

He’s also reminding people he has a patio.

Maja Beckstrom is a writer/journalist who lives in St. Anthony Park. To read more about how local restauranteurs are doing, check out the Bugle’s website and Facebook page.