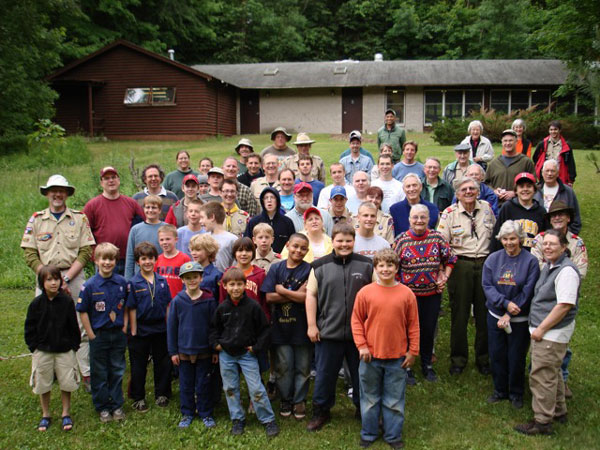 By Mike Smith and Nick Jacobsen

This is the third and final article marking the centennial of Troop 17, Boy Scouts of America. The December 2015 Bugle article covered the beginning through the 1940s.  The January 2016 Bugle article covered the time period of the 1950s through the 1980s.  This article takes us from the 1990s to today.  Troop 17 is the second oldest continuously chartered troop in Minnesota, and the oldest troop in Minnesota continuously chartered by one organization, St. Anthony Park United Church of Christ (formerly St. Anthony Park Congregational Church) and meeting in the same building—2129 Commonwealth Ave.—since its beginnings in March 1916.

A brief recap:  The troop began when a group of St. Anthony Park boys decided to start a Boy Scout troop. They sought out James “Dad” Drew, a professor at the University Farm School. They knew of him from a previous troop start-up in 1910, when St. Anthony Park Congregational Church was in its previous location on the corner of Raymond Avenue and Wheeler Street. Dad Drew happened to live across the street from the new church building, built in 1914. The troop received permission from the church and began meeting on Tuesday nights. Troop 17 has been meeting almost weekly ever since.

The 75th anniversary of Troop 17 was held on Feb. 9, 1991.  A historical video celebrating the anniversary was created and produced by Michelle Christianson and Philip Kibira. This video is now included in “A Digital Time Capsule,” the accompanying DVD to Honor Bright:  A Century of Scouting in Northern Star Council, written and compiled by Dave Kenny in 1910 for the Northern Star Council Centennial.  Several pictures, materials and stories of Troop 17 are included.

In 1998, the troop won a grand prize at the State Fair Scout Exposition for its pioneering display that featured several signal towers and a rope bridge.  These pioneering feats continue to appear annually at the St. Anthony Park Fourth of July parade and picnic.

Another annual event began in 2004 with campouts in late October and early November to cut evergreen boughs for Christmas wreath making,  the annual fundraiser for Troop 17 and Pack 22. Scouts can earn their way to Tomahawk Summer Camp through wreath sales. The troop regularly provides greens, wreaths, garland, treetops and large trees for the Advent and Christmas season in St. Anthony Park churches and community.

Troop 17 celebrated its 90th anniversary in 2006 with a canoe trip and dinner at Fred C. Andersen Scout Reservation on the St. Croix River in Wisconsin, with historical displays created by Steve Granger. Many former Scouts, families and friends attended.

In 2007, Scouter Mark Hansen was awarded the Silver Beaver, the highest award that can be bestowed by a council to a volunteer Scouter. In 2009, Troop 17 and St. Anthony Park UCC together joined the Northern Star Council’s Centennial Commission, which provided leadership and funding for the 100th anniversary of the Boy Scouts of America. Scoutmaster Jerry Wallace was awarded both the North Star District Scoutmaster of the Year Award and the Scoutmaster Award of Merit in the same year.

In addition to the usual troop camping, recent High Adventure trips have included backpacking trips in the Bob Marshall Wilderness and Glacier National Park in Montana and Isle Royale National Park in Lake Superior. There have been Boundary Waters Canoe Area Wilderness trips. There have been several bike trips: from western Wisconsin to Wisconsin Dells; from Grand Rapids on the Mesabi Trail through the Iron Range, down to Two Harbors, along Lake Superior through Duluth and connecting to the Munger Trail to Pine City; and from Duluth to Ashland, Wis., by the south shore of Lake Superior with some kayaking and sailing around Bayfield and Madeline Island.

Also currently in progress since 2013 is a five-plus year project to section canoe the Mississippi River from Itasca to St. Paul. We are busy Scouts!

What do our current Scouts have to say about Troop 17 and Scouting?

Ethan Helmer: “Some of my favorite things about Boy Scouts is getting leadership opportunities in a scout-led trip, I also love how Boy Scouts provides me with knowledge that can be useful in all sorts of situations.”

Ben Schafer: “My favorite part is the camping, since so often it’s a great chance to unplug and get away from technology.”

Brian Whalen: “I think the biggest thing I’ve gotten out of Boy Scouts is the leadership opportunities, the teamwork and the outdoor skills.”

Elliot Helmer: “The knowledge you get from Boy Scouts is great because it can prepare you for the future and help with everyday life.”

Aiden Batchelor: “I think Boy Scouts is great because it’s a chance to get together with your peers.”

The Troop 17 centennial celebration will be held on Saturday, Feb. 27, at St. Anthony Park United Church of Christ, 2129 Commonwealth Ave., , from 4:30-8 p.m.   The evening will begin with a social hour and open house. Scouts will have displays of artifacts, pictures and memorabilia, and the Troop Room will be open for visiting.  At 6 p.m. there will be a buffet dinner, followed by a program at 7 p.m. The guest speaker will be Northern Star Council chief scout executive John Andrews.

All are invited, with special invitation to former Troop 17 scouts and their families.  If you know someone who was a member of the troop or members or families of any former Boy Scout units that were in St. Anthony Park, please let them know.