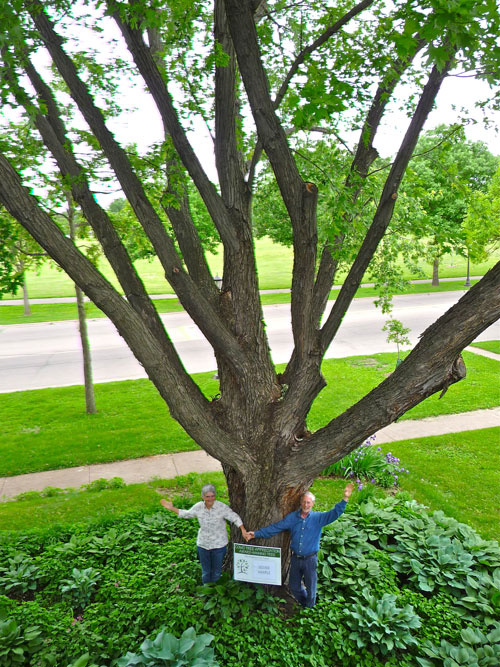 Five homeowners and their 15 trees were selected by the Como Community Council’s Environment Committee to receive Como Tree Appreciation Awards this June. The awards program, now in its fifth year, was developed to encourage homeowners to value their trees and to plant new ones.

Victoria King nominated the 11 trees on her property at 1003 Como Place. Her small lot contains seven Alberta spruces, two swamp oaks, a Royal maple and a silver maple. When she moved in 15 years ago, she planted four silver maples. All but one were lost to storms. She and her husband, Kevin, added the Royal maple and Alberta spruces, then transplanted five of the spruces when they began to outgrow their location. Two swamp oaks were planted on the boulevard by the city.

The couple cares for their trees by tilling the soil, adding compost and watering regularly, the most important element for maintaining healthy trees, according to Victoria.

A beautiful old silver maple at 1156 Lexington Parkway N. was nominated by homeowners Ann Mayhew and Art Oglesby. The tree sits in what appears to be their front yard, but the land and trees actually belong to the City of St. Paul. Along Lexington and some other parkways, the public right-of-way extends past the public sidewalk to within a few feet of the house, so the city maintains and plants any trees on it, as it does with boulevards. A neighbor told the couple the tree had been planted when the city lost many of its stately elms to Dutch elm disease in the 1970s. The couple considers the tree theirs, too, and loves it for its shade and for the habitat it provides for squirrels and birds.

Nancy and Jim Hiebert’s black walnut at 1563 Dunlap St. N. was nominated by a neighbor who enjoys strolling by it. In the 20 years the Hieberts have lived there, they’ve modified their carport roof to accommodate the tree’s growth. They plan to custom design a new garage with the tree’s health in mind. The couple collects its walnuts for baking, and their dogs enjoy the falling nuts and the squirrels attracted to them. Squirrels store the nuts wherever possible—once the couple left a rolled up carpet outside, and when they moved it, found it was jam-packed with nuts.

Caralyn Frisell nominated the century-old maple in her back yard at 911 Nebraska Ave. W., just down the block from last year’s award-winning red maple at 895 Nebraska. She enjoys its “calming, restful majesty.” She and her husband, Larry, tap maple syrup from it each spring, and one of their grandsons enjoys climbing it. She already knows what tree she will nominate next year—a gorgeous oak down the block.

Amy Braun nominated her mother’s apple tree as a Mother’s Day gift to her mom, Mary Jo Braun. Mary Jo’s father, Joseph Braun, planted the tree at 1476 Huron St. in 1947, the same year she was born.

“Unfortunately, the little tree and the sweet daughter only had three years of loving care from Joe, who as a career Army man was killed in the Korean War in 1950,” wrote Amy in her nomination. Both the tree and the daughter have “weathered the storms of life courageously” and “grown into the beautiful age of maturity and wisdom,” wrote Amy. “The tree has lost some branches and tilts to the side, while the daughter has some creaky knees and some arthritis, yet they still stand together.” The tree represents “a father’s love planted in the ground and a father’s love planted inside a daughter’s heart,” she wrote.

Sharon Shinomiya is a freelance writer who lives in the Como Park neighborhood.