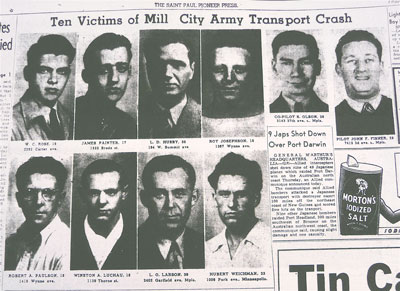 News of the crash hit the pages of the St. Paul Dispatch and the Pioneer Press. Images courtesy of the Minnesota Historical Society.

Despite some clouds and rain, things looked bright for the three boyhood buddies from Como on that summer morning in 1942.

Recently graduated from Murray High School, Roy Josephson, Jim Painter and Bob Paulson had maintenance jobs with Northwest Airlines at Wold-Chamberlain Field, the predecessor to today’s Minneapolis-St. Paul International Airport.
They had just finished their night shift on July 30 and were elated by the prospect that they were next in line for assignment to Alaska. In the meantime, the young men and a few colleagues—including Wilbur Rose from St. Anthony Park, who’d graduated from Murray the year before—had convinced a couple of pilots to take them along on a flight.

The aircraft was a Boeing 247, an early commercial airliner, being converted to wartime use as a U.S. Army transport. The pilots were familiarizing themselves with its operation.

But a supposedly routine flight took a disastrous turn seconds after takeoff. The plane swept nose upward into an almost vertical position, flipped backward and crashed at 7:42 a.m. with a terrific impact that could be heard for miles. Its 10 occupants were killed instantly.

The enormity of the tragedy was slow to unfold in the neighborhood just southeast of the Snelling and Como avenues intersection. The Josephson and Paulson families lived at 1387 and 1419 Wynne Ave., respectively, with the Painters nearby at 1525 Breda Ave. About 8:30 a.m., Orville Painter heard there had been a crash and called his wife, Clara, from his job at the Midway Creamery on Como Avenue to ask if Jim was home from work and knew anything about it. A few minutes later, Roy Josephson’s mother called Mrs. Painter with the devastating news that Roy had been killed.

Anxious about their own sons, Mrs. Painter and Hazel Paulson drove to the airport and entered the Northwest Airlines office, realizing the awful truth as employees offered their condolences.

That night, the grief-stricken parents talked to the St. Paul Pioneer Press about their sons, how they’d been close since starting kindergarten at Tilden Elementary School over on Arona Street. (The reporter, 21-year-old Gareth Hiebert, went on to write for the St. Paul papers for almost 50 years, more than 30 of them as the Oliver Towne columnist for the St. Paul Dispatch.)

The Murray High School student newspaper, The Murcurie, later recalled that all three played on the school’s football team. Josephson was captain his senior year. It also noted that Wilbur Rose had been one of the best-liked students in the Class of 1941, excelling at basketball, track and skiing.

Rose’s father, Raymond, was a plant pathologist in the University of Minnesota’s College of Agriculture and the family lived at 2292 Carter Ave. Hazel Paulson was a sales person for a milliner in downtown St. Paul, while Luther Josephson worked as a mechanic in the nearby Northern Pacific Railway shops.

After a combined service for the three friends at Como Park Lutheran Church, they were interred at Roselawn Cemetery. Rose was buried at Taylors Falls, Wis.

The Army conducted an investigation into the cause of the crash, but it is not clear if the findings were ever made public. Despite the fatalities, the accident does not appear on lists of fatal airline crashes.

In those unsettling early days of World War II, the disaster quickly faded from the public consciousness but area residents of a certain age still remember the shock wave it sent through the community.