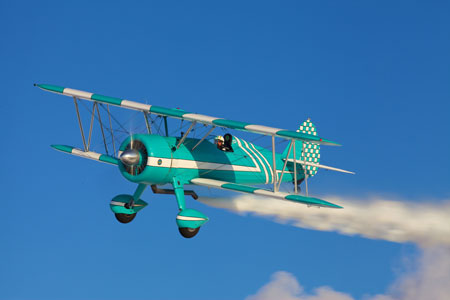 Chuck Doyle Jr. flies the sister ship of the one that crashed in 1951. His father used this plane to tow banners over the Minnesota State Fair for many years. (Adam Glowaski & Box5 Media)

It was Labor Day 1951, and what would turn out to be the last aerial thrill show ever at the Minnesota State Fair had 26,000 spectators on the edge of their seats.

The little red-and-cream biplane with a young woman on its upper wing sped through a series of acrobatic maneuvers as the grandstand announcer described the action and emphasized how dangerous it all was.

Kitty Middleton, real first name Pansy, a 17-year-old from the Missouri Ozarks, was performing in only her third air show. At the plane’s controls was former military pilot Carl Ferris, 27, of Lansing, Mich.

As usual, the act’s finale was to be an engine-off dive, then a dramatic power-on climb, followed by a triumphant pass by the grandstand. But this time something went wrong. The plane failed to come out of the dive, crashing about a half-mile to the north near Larpenteur Avenue.

There was a collective gasp from the crowd as first a pillar of fire rose from the crash site, then a cloud of black smoke.

Ferris died on impact, the force of which tore Middleton from the straps that held her to the wing, tossing her 75 feet away. She died about an hour later at the Northern Pacific Hospital near Snelling and University avenues.

Mrs. John J. Keller owned the cabbage patch behind 1780 W. Larpenteur Ave., where the plane crashed. She told the St. Paul Dispatch that, because of the daily shows, she had “lived in fear all week that we’d be killed.”

Her grandson, William Miller, 13, had been hoeing weeds just before the crash and started running as the plane approached.

The teaming of Middleton and Ferris, sometimes billed as “The Skylarks,” had been veteran stuntman George Waltz’s idea for revitalizing an act he originated years before. People had grown tired of seeing him ride the wing himself, and Waltz decided if he was to get more fair bookings, he needed a more powerful plane and a “pretty girl” to take over his role.

Middleton, the youngest of 13 children, didn’t require much persuasion to leave home for such exciting work. Waltz obtained his new plane, a Boeing Stearman that had been used as a trainer for Navy pilots in World War II, from a well-known Twin Cities-based aviator, Chuck Doyle. As a young man, Doyle had performed stunts himself at the Minnesota State Fair and went on to work for Northwest Airlines.

“My dad and Waltz had a handshake agreement,” recalls Chuck Doyle Jr. “No money down and $3,000 to be paid at the conclusion of the Minnesota fair.”

Aerial thrill shows—wing walkers, parachutists, car-to-plane and plane-to-plane transfers, planes crashing into “houses”—had been a popular grandstand feature for 40 years. Despite this recent tragedy, at least one newspaper predicted that the shows were likely to continue.

An investigation by the Civil Aeronautics Administration found that Ferris was flying lower than authorized and absolved fair officials of responsibility for the accident. But there would be no more stunt flying at the fair.

In that less litigious era, Doyle Sr. never got paid for his plane but didn’t pursue the matter; nor is there any record of lawsuits being filed by Middleton’s or Ferris’s survivors.

Doyle Sr. owned another Stearman plane, however, a twin to the one that was destroyed. That aircraft became a familiar sight to fairgoers well into the 1980s as he used it to haul banners for KSTP broadcasting, 7UP soda and many other clients.

Doyle Jr. has restored that plane and still flies it occasionally at air shows, where it delights crowds just as its sister ship did, for a short time, all those years ago.