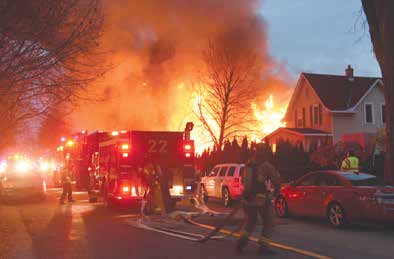 In just a few days, 2019 will be history. It’s been a year chock full of news, both on the local as well as national levels.

So, as you look back on 2019, what will you remember? What’s been significant? In the following text, the Bugle reprises some of the highlights captured on our news pages:

For many summers, a lush garden has graced the front yard at 1369 Wynne Ave. in St. Paul’s Como Park neighborhood.

But whether homeowner Thomas R. Swenson can rejuvenate the garden for next summer may be the least of his worries. Swenson’s two-story house was recently destroyed in a morning fire.

Called “The Hendrickson,” the project will feature 66 market-rate apartment rental units for people who are at least age 55, don’t need assisted medical services but want a living setting with on-site social activities, said Peter Austin, vice-president of finance at Kelly Brothers Ltd., the project’s developer. The project will also include one guest unit.

Developers may build up to 450 units of housing on a 15.5- acre redevelopment site at Luther Seminary. But the team is also pledging to preserve as much of that property—called Breck Woods—a prized, seven-acre parcel of open space, as possible.

“This site is a jewel,” David Motzenbecker, of Motz Studios, said of Breck Woods. “There is nothing else like it.” The developer team, led by Master Properties Minnesota LLC, believes that preserving Breck Woods “is something we agree with you on.”

Motzenbecker’s comments came at a community meeting where Master Properties introduced the members of its development team regarding the Luther Seminary redevelopment parcel. Some 150 neighbors and residents attended the meeting, which was hosted by the St. Anthony Park District 12 Community Council.

Update: This proposal is still in process.

St. Paul-based Sunrise Banks has kicked off the New Year with a new chief financial officer (CFO), naming Kevin Valois to the post.

Valois succeeds Melodie Carlson, who recently became Sunrise Banks’ chief administration officer. “I grew up in the Como Park area of St. Paul,” Valois said. “It’s great to be back in St. Paul and serving the communities that hold a special place in my heart.”

Faacks was a butcher for the last 37 years and co-owner of Tim & Tom’s for the past 24 years.

“Although we hate to see him go, we wish Tim the best in retirement,” Tom Spreigl, Tim & Tom’s co-owner said in a press release. “The store would be nothing without his expertise and fine touch when it came to cutting meat.”

A new $16 million exhibit complex was among improvements coming to the Minnesota State Fair for its 12-day run this year.

The State Fair’s board of managers approved the capital project, which is on the North End of the fairgrounds, as part of $20 million in improvements and maintenance work.

As the Bugle went to press, our newspaper learned that Micawber’s Books in downtown St. Anthony Park is preparing to “close at the end of April” due to health problems of its long-time owner Tom Bielenberg.

“Friends of Micawber’s will be saddened to learn” Bielenberg fell on Sunday, March 3 “and fractured his hip and broke several bones, said Dave Healy, former Bugle editor who is active in book events at the store, 2230 Carter Ave. in Milton Square Shops. “He is looking at a long and intensive recovery of at least three months. Due to this accident, Tom will be closing Micawber’s.”

On March 2, Tim Smith and his son Michael shared a bigger-than-normal birthday celebration.

The senior Smith, who turned 60 that day, completed the sale of the Carter Avenue Frame Shop, a custom picture framing and art gallery business, to son Michael, who turned 30.

For Como Park, the 2019 Athena Award winner is Gianna Gabrielli, a three-sport varsity athlete since her freshmen year.

Soccer in the fall, hockey in the winter, and softball in the spring—for four years, Gianna (or “Gigi” to teammates and coaches) has represented Como and the community. In addition to 12 varsity letters, Gianna’s accomplishments include a two-time captain in soccer for the Cougars, a two-time captain in hockey for the St. Paul Blades (now Riveters), and currently a senior softball captain for the defending city champs from Como.

After more than 100 years in business, the Prospect Park neighborhood’s vulnerable Schneider Drug Store, 3400 University Ave. S.E, shuttered its doors for good on May 1.

Jim Stage, Schneider Drug’s owner and pharmacist, blamed changes in medical insurance reimbursement practices during the past year for putting a squeeze on the pharmacy’s revenue. He also alluded to growing redevelopment pressures along the University Avenue corridor with the advent of the light rail transit line passing by his store.

When Bibelot began in 1966, the idea of a gift shop was unusual.

Specialty stores stocked full of home goods, clothing, sundry souvenirs and trinkets were rare. From Woolworths to the now-ubiquitous Target (which first opened in Roseville in 1962), Twin Cities residents had little choice but to patronize museum and department stores to meet their retail-gift needs.

So, when Roxanna Freese opened the first Bibelot Shop in St. Anthony Park, she truly changed the game. She curated a unique shopping experience, brought enterprise and creativity to her neighborhood, and fostered an enduring sense of community that continues to shape St. Anthony Park.

More than a half-century later, Bibelot is gone from St. Anthony Park. But its legacy lives on through its successor—boreal. Co-owned by former Bibelot employees Peggy Merrill and Janet Haugan (who served as general manager), boreal debuted in May in the same commercial space held by Bibelot until earlier this year.

An exploratory plan to build a new bandstand at Langford Park met with mixed reviews at an initial neighborhood meeting convened by the plan’s proponents, the 4th in The Park Committee.

The 4th in The Park Committee, which holds various events at Langford Park on July 4, said a new bandstand could better meet the needs of the community band and other groups, providing them with more space, a place for a screen to project movies, accessibility, water, electricity for amplification and decorative lighting.

Phill Duff contended it would be a “misstep” if the bandstand were torn down, noting the 107-year-old structure is historic and the last of its kind in the city.

Winding Trail Books is the newest retailer in Milton Square in downtown St. Anthony Park, filling a void left by the recent closing of Micawber’s Books this spring,

Sue Costello and Rick Gahm, a Vadnais Heights couple, are co-owners of the new book and gift shop, which debuted the July 18th weekend.

Costello said opening Winding Trail Books fulfills one of her life ambitions. “As a book lover who has spent many hours in libraries and bookstores over the years, it has always been a dream of mine to own a bookstore,” she said. 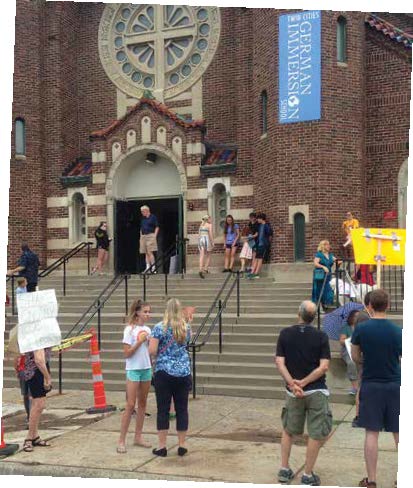 The final open house for the former St. Andrew’s Church in the Como neighborhood held special meaning for Tom Fauskee.

TCGIS officials hope to have their new $6 million building completed for the 2020-21 school year. They obtained a demolition permit in late July from the City of St. Paul and the church building teardown took place in mid-August.

Schumacher to retire from SAP foundation

He is often playfully referred to as the mayor of St. Anthony Park. But Jon Schumacher says he is really just the guy who finds out and follows up.

As the executive director of the Saint Anthony Park Community Foundation for the last 20 years, Schumacher has been the unofficial go-to guy for all things St. Anthony Park.

Add Schumacher’s election to the St. Paul Public Schools Board of Directors in 2015; his seven years on the city’s Neighborhood Sales Tax Revitalization (STAR) board; years managing the student newspaper and spring talent show at St. Anthony Park Elementary School, serving on site councils at both Murray Middle School and Como Senior High School; and chairing and serving on the St. Anthony Park Lutheran Church council, and that “neighborhood mayor” moniker is easy to understand.

In December, Schumacher will take off “the guy hat,” as he calls it, and retire from the foundation.

A new owner plans to convert the former Sholom Home senior care center into 150 rental apartments. But the project will require a substantial parking variance in order to work, a representative of Midway Community Group Redevelopment told District 10’s Land Use Committee in October. The company, headed by Minneapolis developer Jeffrey Laux, is buying the former nursing home property at 1554 Midway Parkway through foreclosure.

“It comes down to parking,” Chuck Repke said. “This can work, but it comes with a dilemma.”

New office will be doggone close to work for this vet!

According to the U.S. Census Bureau, more Americans are working from home than ever before—some 8 million people in 2017, which doesn’t include those who are self-employed. Telecommuting is an option for some so-called knowledge workers, but it’s not feasible for a lot of people—veterinarians, for example.

But if you can’t work from home, the next best thing is being able to walk to work. Sometime in 2020 that will be possible for Dr. Starke Mueller, who lives in St. Anthony Park. Mueller is building a new veterinary clinic at Raymond and Hampden avenues, just a half block from where he lives with his wife, Breanna, and their four children.