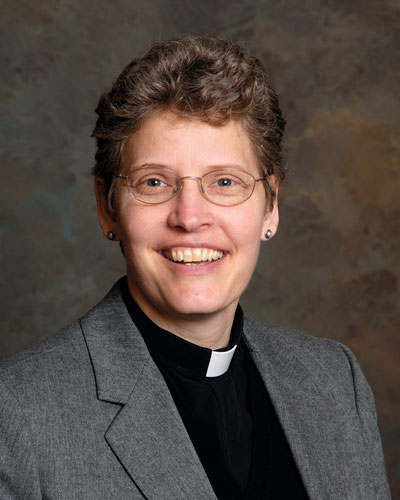 The Luther Seminary board of directors has elected the Rev. Dr. Robin J. Steinke to be the seminary’s next president.

Steinke is the first woman to be named president in the seminary’s 145-year history. Steinke will succeed the Rev. Rick Foss, who has served as interim president since December 2012. She will take office on June 1.

Steinke is currently the dean and a professor of theological ethics and public life at Lutheran Theological Seminary at Gettysburg, Penn., where she has served since 1999. She previously served as an Evangelical Lutheran Church in America (ELCA) pastor, a training manager and financial planner at American Express Financial Advisors, and a middle school band director in Marietta, Ga.

A graduate of Augustana College in Sioux Falls, S.D., Steinke holds a master of divinity and a master of sacred theology from Trinity Lutheran Seminary in Columbus, Ohio. She received her Ph.D. from the University of Cambridge in England.

Steinke co-chairs the national ELCA Theological Education Advisory Council that is evaluating and exploring the future of theological education. She serves as the ELCA representative to the Lutheran World Federation Council and chairs their endowment fund. She is a member of the ELCA Ecclesiology Task Force and serves on a number of other church and academic committees.

In June, she will conclude her six-year term as a commissioner for the Association of Theological Schools’ Commission on Accrediting. Luther Seminary, located in St. Anthony Park, is one of eight seminaries in the ELCA.