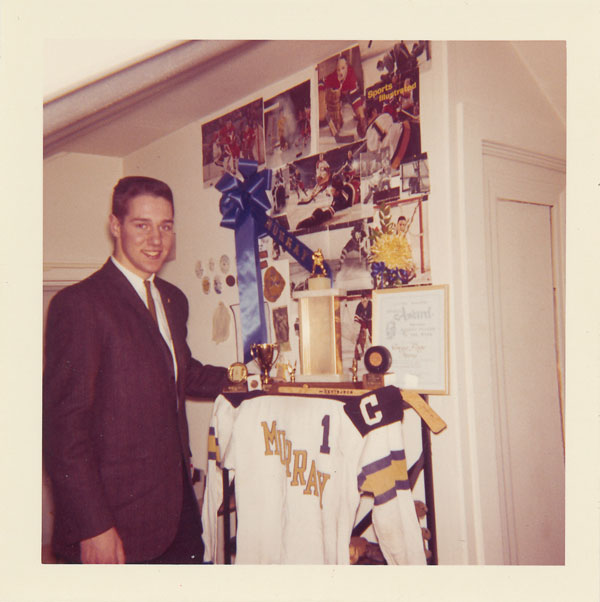 Gregory Page missed out on a first-place win in 1963 when Murray High School’s hockey team went to the state tournament, only to end the season in fourth place.

But on April 21, the 71-year-old goalie celebrated a first-place win with his team, the Minnesota Oldtimers, in the USA Adult Hockey National Tournament 70-plus bracket in Florida.

“We played five games in four days, and after a furious battle, defeated the Michigan Sting in the finals, 2-1,” Page said.

A lifelong resident of St. Anthony Park, Page hasn’t stopped skating since he first learned on a flooded tennis court that once stood at one of the triangle parks on Branston Street at Hendon Avenue. He started playing hockey on the outdoor rink at Langford Park in sixth grade, got pretty good at it, he said, and then played goalie and was co-captain for Murray, when it was a grade 9-12 secondary school.

Murray hockey players practiced on an outdoor rink next to the school, before the district built the new science wing and gymnasium on the south side. Skaters moved onto a flooded area on Fulham Street, where Luther Seminary’s Olson Campus Center is now, and then skated at Murray Field, across from HealthPartners on Eustis Street. “We flooded the rinks ourselves and always played outdoors,” Page said.

Page won a hockey scholarship to the University of Michigan. After college, he hitchhiked around the world, became a vice president at Minneapolis advertising agency Campbell Mithun, worked for a company that opened stores at airports, and retired from the St. Paul Riverfront Corp. five years ago.

Now he spends Tuesday mornings in Bloomington skating with a group of guys, ranging from late 50s to 80, some of whom are former Olympians, he said. The group plays a few tournaments each year and has won at the Florida tourney four out of the last five years. Page, whose 1963 Murray hockey jersey hangs in the Xcel center in St. Paul, said he was thrilled that at 71, he has just won a national hockey championship.