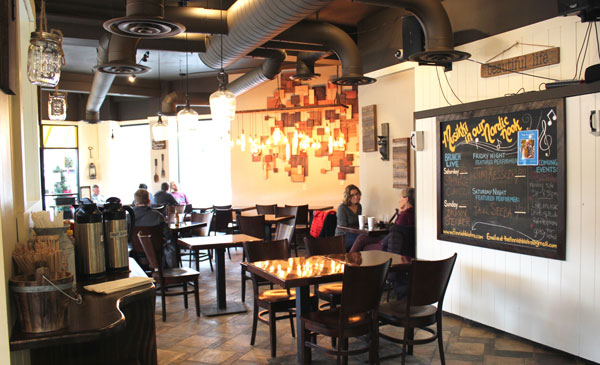 The Finnish Bistro’s dining area expanded, windows were added and a Murphy-bed stage (at left) can be pulled down for performances.

Sandra Weise wants everyone to know that construction is over and the newly remodeled Finnish Bistro is open.

The restaurant at the corner of Carter and Como avenues in St. Anthony Park now has an expanded dining room complete with a Murphy-bed stage that can be pulled down for evening and weekend entertainment, one service counter for coffee and food, and premium Wi-Fi.

The remodeling project was something Weise had on her to-do list since she bought the restaurant from Soile Anderson four years ago. The project began at the end of September, and within two weeks, her contractor Marv Kuiper, died in a car crash on Oct. 14.

“This was his retirement gig,” Weise said. “His last one.”

Weise has a set of angel’s wings hanging on the north wall of the dining area in honor of Kuiper, whose brother, Ron, stepped into finish the project. Within a week of taking that on, Ron Kuiper suffered a stomach abscess, Weise said.

Throughout the remodel, Weise posted updates on the St. Anthony Park neighborhood listserv, SAPark@yahoo.com. “It has been quite shocking and sad for all of us,” Weise wrote in early November. “Kuiper Specialties is a small family business” that was “a great fit for me and our neighborhood. . . . The subcontractors that worked for Marv for 30 years are all working together to get my project done and are moving along as best they can. I am not that experienced with commercial renovations myself, but I am doing my best to keep my spirits up for my staff and all our loyal customers.

“It has not been easy, but I can hear big Marv in my head bossing me around, so that helps.”

A major piece of the Bistro’s remodel was to bring the coffee and food service to one counter. The café had actually been two businesses: Finnish Bistro on the east side and Dunn Bros. Coffee on the west. Customers had to access two counters and two cash registers to get coffee with their food.

Dunn Bros. moved out in late summer and Weise held three blind taste tests of 12 local coffee roasters to determine which brand to serve at the café.

“Forty-two percent picked Truestone,” she said. Truestone is located on Prior Avenue, just north of University Avenue in St. Paul. Other than the coffee, the menu has stayed the same and includes breakfast, lunch and dinner items, bakery goods, and wine and beer.

Other improvements include a new two-door entry on the Como Avenue side to help with airflow and that opens to the service counter rather than the dining area, new bathrooms, quieter chairs, soft lighting and more windows.

Live music during Saturday andSunday brunch and on Friday and Saturday nights will continue.