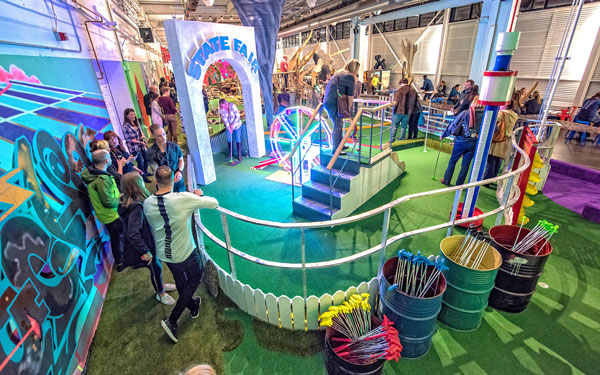 Can Can Wonderland CEO Jennifer Pennington describes her multi-focus arts and dining complex on
Prior Avenue in St. Paul as a “for-profit business with a social purpose.” Photo by Mike Krivit,
www.mikekrivit.com.

Is it truly possible to do well by doing good? Can an investor advance a good cause without endangering the bottom line? The idea of socially responsible investing has been on the scene for quite a while, but some area businesses and local groups are doing their best to test the standard formulation in new ways. Aided by legislation passed by the Minnesota Legislature in 2015, which allows companies to officially elevate social goals to equal standing with financial ones, they’re exploring new ways to benefit the community while continuing to turn a profit.

“The movement toward socially responsible [enterprise] can be embraced no matter what kind of business is involved,” says Sunrise President Nichol Beckstrand. Quietly acknowledging that the banking profession “is not always viewed in the best light” by those who pay attention to financial scandals, she says Sunrise’s public-benefit status gives her a special jolt of pride in her profession. “Being able to use financial skills to improve people’s lives through products and interactions is very satisfying.”

The public good has long been part of Sunrise’s business model, Beckstrand says. “We talk about making mission versus margin decisions,” summing up the balancing act between financial and social concerns. Sunrise adopted public-benefit status in Minnesota as soon as the legislation went into effect in 2015. But even before that—since 2009—the bank has been a “Certified B Corporation,” commended by the B Lab, an out-of-state group that bills itself as “a nonprofit organization that serves a global movement of people using business as a force for good” for meeting the “highest standards of corporate purpose, accountability and transparency.”

The driving force behind Sunrise Banks’ public enterprise philosophy has always been CEO David Reiling, says Beckstrand. His concerns found a receptive customer base in the area, when Sunrise was formed several years ago by the merger of several local banks, including St. Anthony Park-based Park Bank.

“Technically, the branding and labeling came from University Banks,” Beckstrand says, “but being in a socially conscious community like St. Anthony Park [made it] an easy transition.”

Banking with Sunrise “[should give] the customer confidence that we are providing good products and transparent services. Money earned goes back into the community. Over 60 percent of our profits and products stay in the community.” 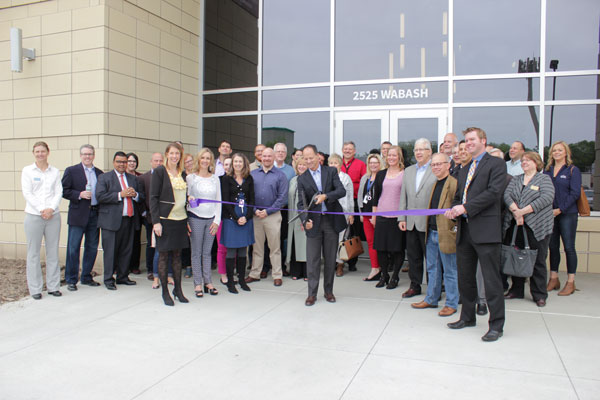 Living wages and decent benefits for employees are part of the mix, as is a commitment to “small-dollar loans to startup companies” through initiatives like Equity Equivalent [EQ2] investments. “EQ2 investments will make below market-rate returns,” Beckstrand says, “but we believe those small businesses will improve the community.”

Sometimes, the help provided to start-ups comes in the form of some bracing advice rather than capital. “We have to run a business,” says Beckstrand. “We can’t fund customers who have a great idea, but are not good business managers.” In those cases, the bank may refer loan applicants to “good nonprofits” who can help them sharpen their managerial skills and “get them where they want to be in a few years.”

Sunrise Banks’ socially beneficial pledge applies to all areas of its business. Some other, smaller area businesses have chosen “special benefit” status to emphasize a single area of socially responsible commercial effort.

An economic engine for the arts

For Can Can Wonderland, the multi-focus arts and dining complex on Prior Avenue just south of University Avenue in St. Paul, the social benefit piece is simple. “We’re a for-profit business with a social purpose. We want to be an economic engine for the arts,” says CEO Jennifer Pennington. The centerpiece of Can Can’s attractions is the indoor mini-golf course designed by 54 local artists, but the complex also offers a vintage arcade, two bars, a restaurant and an average of 22 art-activity programs a week for all ages. A $2 cover charge (free for kids under 12) allows the visitor to take part in everything from “drop-in mosaics, collage, painting and fiber art” to their “Tappy-hour program—group tap dance lessons.”

Pennington thinks mini-golf is the perfect draw. “It appeals to a large demographic,” she says. “People come for the golf, and they stay for another form of art that they haven’t experienced before. We grow new audiences for the arts.”

At Can Can Wonderland, the declaration of public-benefit status provides a way of insulating their mission from the rougher winds of commerce. “It protects our values” against investors who might otherwise call for bigger profits, Pennington notes.

The company’s main focus is based on technology developed by a pair of professors at the University of Minnesota to address wastewater treatment created in the fracking process for oil extraction from shale deposits. As a commercial spin-off company,  “Minnepura has pivoted to apply the technology to commercial and residential swimming-pool use,” says Hansen, who adds that the process “could save billions potentially.”

Meanwhile, he is interested in “attracting, developing and retaining talent,” many of whom are millennials who are intrigued by the possibility of working with technology that can “make a positive impact” on the environment.

Although Hansen believes that Minnepura can maximize both financial gain and social impact, he says that the main problem with declaring the special social benefit status is dealing with “traditional investors who see those concepts as being opposed.” That means that Hansen, who has a background in industry at 3M, thinks “traditional investors may be put off. We’ve taken less investor money and more grant money [from nonprofit sources.]”

However, organizations like Sunrise Banks may be changing that paradigm.

“It’s now commonplace for organizations to have a mission in addition to [a profit motive],” says Beckstrand, noting that the bank donates to 2 percent of its pretax earnings to nonprofit groups.  “It’s almost an expectation when I talk to audiences of [school kids]. It’s interesting to consider what kind of businesses those kids will be starting in 20 years.”

St. Anthony Park resident Sherman Eagles is one of the organizers of a different kind of startup. “We’re not a formal organization. More of a working group of individuals … looking for anyone interested in investing in alignment with their values.”

The group, which calls itself Transition Your Money, grew out of a workshop held last summer at a Transition Town conference at Macalester College, Eagles explains. About 15 people have attended each of the three meetings they’ve held so far, Eagles says. “We’re still learning, exploring different ways that people can invest locally and aligned with their values.”

Some of the ideas they’ve looked at include “unlocking” retirement savings held in IRAs or 401(k)s that are vested in investment vehicles not chosen by the individual saver. They’re also considering the idea of incorporating as a commercial real estate co-op, where “each member gets one vote. People can invest more, but you don’t get more votes.”

They would like to keep the focus local. “We may be interested in buying local rental properties and keeping them affordable,” Eagles says. “The only way to know what your money is doing is to know the businesses you invest in. And that improves your community.”

They may not have figured out the means yet, but Eagles says they’ve already got a firm vision of the long-term goal they want to reach.

“We want to discover ways to transition our money to build the community we’d like to live in,” he says.

Transition Your Money meets on the third Wednesday of the month at 6:30 p.m. at Lori’s Coffee House at Cleveland and Buford avenues in St. Anthony Park. Newcomers and drop-ins are always welcome.