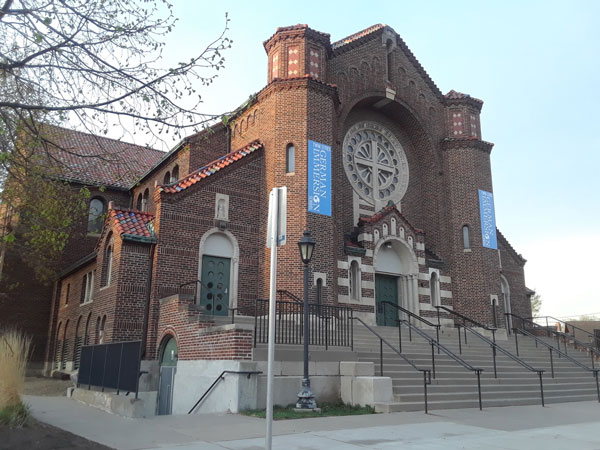 The St. Andrew Church was built in 1927. Photo by Phil Schmid

Can the former St. Andrew Church in Como Park be saved from demolition?

“Save Historic St. Andrew’s,” a group of 23 neighbors who live near the Twin Cities German Immersion School (TCGIS), is hoping a petition asking the school to delay any decisions on its proposed expansion project until 2020 will do just that.

TCGIS, a public charter school that moved into the site of the former St. Andrew parish in 2013 with 330 students, has seen its enrollment increase to 555 in five years—and it’s expected to grow to more than 600 by 2021.

The school needs four more classrooms, additional dedicated spaces for special education, a larger cafeteria and a larger gymnasium space, explained TCGIS parent Nic Ludwig at the May 2 Como Community Council Land Use meeting. Ludwig, who lives just four houses from the school, is a parent at the school and chair of the school’s facilities committee.

After a year of study—which included looking at buying or leasing additional space, having a split campus or building a new structure at the current site—the school came up with a preliminary plan that would tear down the former church, which the school calls the Aula (now used as a gymnasium and cafeteria) and construct nearly 23,000 square feet of new space. The school wants to break ground on the nearly $4.5 million project in June 2019.

Teri Alberico, a member of the Save Historic St. Andrew’s group and a resident of Warrendale (the name of the neighborhood surrounding the school), says the group wants to help develop alternatives that would keep the 91-year-old church building in place and keep TCGIS onsite.

“The school, mostly Nic, has worked hard to find alternatives,” she said, “but we believe there are other options to ensure the structure remains in place. We want to work with the school to find these options.”

The school is open “to a better way of doing it,” Ludwig said, but emphasized that after a year of studying options, the school had found that creating a new building “was the best option to move the school and chair of the school’s forward.”

“It’s not only about space,” he said. “It’s about budget.” Maintenance costs to replace the Aula’s roof, boiler, windows and doors and the terra-cotta roof would cost nearly $1.2 million. To upgrade the Aula and build new classroom space would also compromise playground space, he said.

The three-towered church, with its Byzantine-Romanesque exterior and terra cotta roof, has been a landmark in the Warrendale community since it was built in 1927—32 years after St. Andrew’s Parish was established in 1895. It was the home of St. Andrew School until 1989, when Maternity of Mary and St. Andrew schools merged and moved to 592 W. Arlington Ave. St. Paul Public Schools leased the school building for many years and its French immersion school, L’Etoile du Nord, was in the building until 2011.

St. Andrew Church stayed on until it merged with Maternity of Mary Church on Dale Street. The last Mass was held on June 12, 2011. Two years later, TCGIS Building Co., bought the church and school building from the Maternity of Mary Parish, and leased it to TCGIS. (Charter schools are publicly funded, and under Minnesota law these schools cannot use public funds to purchase facilities from which they operate.)

If the school proceeds with its current plans, Ludwig said the community would be engaged in design elements. He’d like to see some sort of homage to the church building “whether that’s using some of the brick or architectural details or clay roofing tiles,” he said.