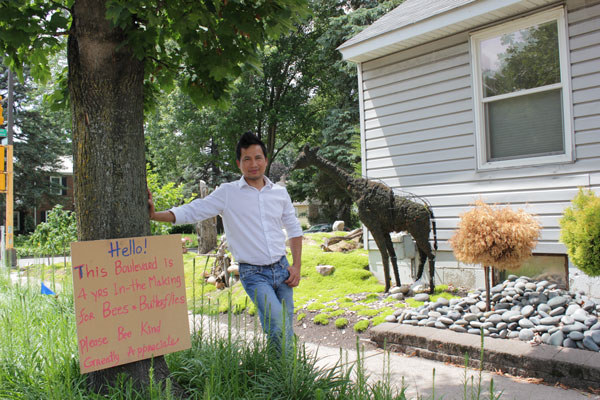 This man has a dream: a floral gateway to Como Park

Quentin Nguyen wants to plant five blocks of flowers in the boulevards along Lexington Parkway. Photo by Kristal Leebrick

His latest idea is to rally his neighbors and local businesses in the Como Park neighborhood to help create a five-block-long, blooming boulevard garden along Lexington Parkway, stretching from Larpenteur to Montana avenues. He calls it the Lexington Boulevard Beautification Project and he envisions it as a “gateway to Como Regional Park.”

Nguyen’s home at the corner of Hoyt Avenue and Lexington is well known to joggers, strollers and the many drivers and bikers who pass in and out of the park each day. It’s hard to miss with the 6-foot-tall moss-covered giraffe he calls Gabriel standing watch at the southeastern corner of the house, the Dr. Seuss-like topiaries lining the lawn, the elf-size door built into a hill, the giant tortoise sculpture and the hanging garden on his backyard fence along Lexington, where he’s planted herbs and lettuces into 100 or so 2-liter green pop bottles.

And the flowers. Nguyen’s Lexington-side boulevard is filled with liatris, or blazing star, a garden several years in the making. Come late July, his stretch of the street will be filled with purple blooms that attract birds, bees and butterflies.

That’s what he wants for the 19 boulevards in the five-block stretch that Nguyen wants to plant: gardens that are beautiful to see and that create a habitat for pollinators. His plan is to plant one kind of flower in each boulevard and hopes to have a mix of early-blooming flowers, midsummer bloomers and late-bloomers on each block. This, he says, will bring a “mass of color” for residents and visitors who travel that route and provide easy maintenance.

“It will make drivers slow down when they see the beautiful flowers,” he says, “and it will bring neighbors together.” He envisions weeding parties that will be fun and become a tradition.

Nguyen has been knocking on homeowners’ doors to get permission to plant in their boulevards and to recruit volunteers. The response has been positive. Como Park Lutheran Church’s youth group has expressed interest in helping, and Murray Middle School science teacher Tim Chase sees an opportunity for students at the local school to learn more about planting a pollinator habitat. Nguyen is also working on a phased plan for the project with cost projections and a timeline to give to the District 10 Environment Committee, which has expressed interest in helping find grant money for the project.

Nguyen launched a Facebook fundraiser to buy plants and materials. So far, he’s raised $375 from donations and from selling plants from his own gardens. If he can’t raise enough money to buy plants, seeds will work, he says. It will just take a little longer for the boulevard gardens to establish.

Nguyen, 24, was born in a rural village near Cam Ranh, Vietnam, before immigrating to Minnesota as child. Starting out in an agrarian community may have had some influence on his green thumb, he says, but he never gardened until buying his home four years ago. Since then, he’s just enjoyed coming up with “ideas after ideas” in making his home “fun.”

Now, he’s setting his sights on a few blocks of public land—the boulevards—for a community project.