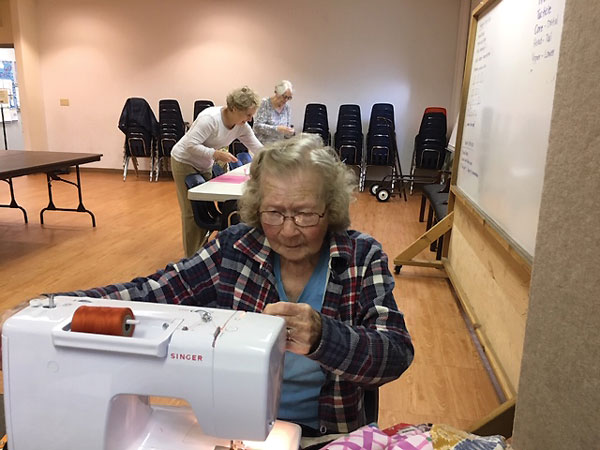 When I was young, I never knew anyone who reached the age of 90. People in their 70s and 80s seemed very old and, from my vantage, mostly took life easy.

But Lauderdale resident Eleanor Gorden—who turns 100 on Nov. 14 and who worked as nurse until her mid-70s—still remains very active.

These days, Eleanor quilts every Thursday at St. Anthony Park Lutheran Church, sews at home and, with the help of her son Tom (who lives with her), tends her garden.

“We’re farmers!” she says. They grow strawberries, raspberries, currants, zucchini, carrots and squash. (I even was given a jar of Tom’s homemade strawberry-currant jam.)

Eleanor began her life on a farm in western Minnesota, near Kerkhoven. But after her father died when she was 7-years-old, it was too hard for the family to maintain the farm, so they moved to Truman, Minn., where Eleanor’s grandparents lived. After watching the nurses take care of her father, Eleanor decided she, too, wanted to be a nurse. And she never wavered from that course.

After graduating from high school, Eleanor attended the University of Minnesota for the required one year, and then studied nursing for three years at St. Andrew’s Hospital in south Minneapolis. (The building is now a boarding house.)  She worked for three years at St. Andrew’s. Then, after only a six-month interlude at a small hospital in Mankato, she was called back to St. Andrew’s to serve as the director of its nursing department.

Many nurses volunteered to serve in World War II at that time, but Eleanor—who is tiny in stature—didn’t weigh enough to join the Army, so she continued working at St. Andrew’s, making do with a small staff. There were some student nurses to help out, but they could only work six hours a day after their courses, so Eleanor worked extra hard, with long hours. (She never did gain any weight!)

In 1943, Eleanor married her first husband, Warren Thompson. Like many men of his era, Warren didn’t want his wife to work full time, so Eleanor worked night shifts part-time. At the same time, she raised four children: Jeannie, Tom, Lois and Bill. Unfortunately, Warren died after only 17 years of marriage, so Eleanor went back to work three or four nights a week as a private duty nurse at the U of M hospital. As such, she was responsible for only one patient at a time, many of them heart patients.

In 1952, Dr. C. Walton Lillehei had assisted Dr. F. John Lewis with the first open-heart surgery using hypothermia at the University of Minnesota, and later pioneered the use of the first heart pacemakers. Eleanor was one of the nurses in charge of these fragile patients during night shifts. Lillehei realized that some of them died overnight, he recruited her to teach the other night nurses the importance of turning the patients at regular intervals, which lowered the mortality rate.

In 1952, Dr. C. Walton Lillehei had assisted Dr. F. John Lewis with the first open-heart surgery using hypothermia at the University of Minnesota, and later pioneered the use of the first heart pacemakers. Eleanor was one of the night-shift nurses in charge of these fragile patients. Realizing that other nurses had not been properly trained to care for heart patients, Lillehei recruited Eleanor to teach them the importance of turning the patients at regular intervals, which lowered the mortality rate.

In 1972, Eleanor married her second husband, Eugene Gorden. She agreed to marry him but she would continue working night shifts, which she did until she retired. After Eugene died in 1986, Eleanor continued to be employed at the University Hospital, and later worked about two nights a week there, assigned by the Nurse’s Registry. Eleanor enjoyed working at the U because “you learn more there and you meet people from all over.”

One of the patients that she remembers fondly was a boy who she cared for more than five years, even letting his mother sleep at her house while Eleanor was on duty as the boy’s night nurse.

Now, other people are getting the chance to show how much they care for Eleanor.

Her family is hosting a birthday party for Eleanor on Saturday, Nov. 10, and her whole family expects to be there—four children, seven grandchildren and one great-grandchild. Son Tom says they will send out “lots of invitations,” and, of course, all the quilters will be part of the festivities.

Because Eleanor is in good health — “just a little arthritis” — this isn’t likely to be the last time the life of this remarkable woman will be celebrated.