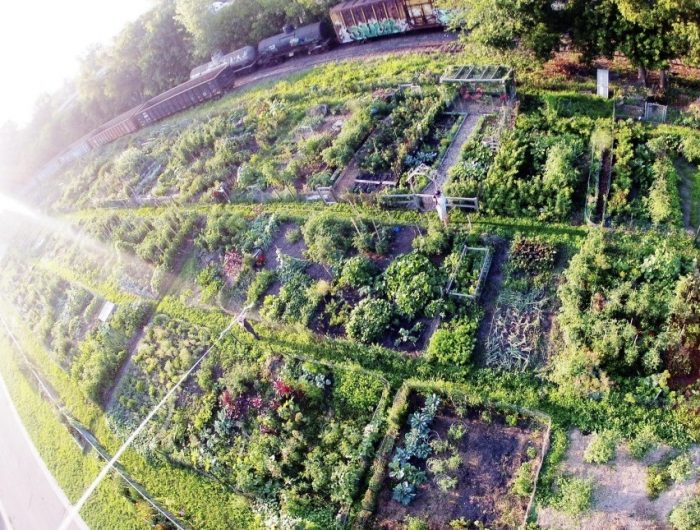 A community garden’s roots, and its gifts 

Any summer day, if you’re going south on the railroad bridge on Raymond Avenue, turn west onto Robbins Street just south of the bridge. There, spread out along the tracks, you will see an urban garden paradise! Smack in the middle of railroad and industry!

You may see gardeners working their plots or visiting each other.

How did this garden get here?

The story of the St. Anthony Park Community Garden begins in 1981 when the area was a full of rubble, concrete and all sorts of junk.

Some neighbors had a vision, inspired by the District 12 Community Council’s composting project on part of the site, which it was leasing from Burlington Northern Railway. Seeing greater potential, the neighbors planned and worked together, coordinating with the Council and businesses nearby.

Since 1999, the site has been owned by the council, thanks to a grassroots campaign aided by grants from the city of Saint Paul, a gift from Ettel and Franz Roofing along with donations from neighbors and neighborhood businesses.

There are many stories to tell of the efforts and cooperation, and the occasional silliness as this garden grew. The gift of the garden is to today’s gardeners, to neighbors who bike and walk by, to families who show their children bees, butterflies, green beans and tomatoes, to the big city that breathes a bit easier. This gift is from neighbors and gardeners of the past who were willing to give of time, energy and, yes, funds. And the gift is from the gardeners of the present who step up when it counts. Here’s one example.

When the garden’s water supply was turned on by the city this May, we quickly realized that there was a leak. We knew that our 35-year-old system was wearing out; we had been warned two years ago.

The original installers had said that they would need to bring in a truck to replace the system and it needed to be done when the gardens were not in operation.

Yikes! It was high season, with plots ready to plant. Now what?

Enter Joel Kreller, a second-year community gardener and owner of a local company, Go Wild Outdoors Irrigation. We called Joel and asked if there was any other way to do the job. Joel said yes, he could use a trencher and hand shovel.

But spring is crazy time for irrigation businesses. He was working dawn ’til dark, then staying up late doing paperwork.

But Joel did the unimaginable for the Community Garden. He and a colleague started that Saturday, working into the evening, then continued on Sunday until almost midnight. They got it done!

And we now have a Cadillac system. Before, if we needed to make a repair, we had to climb into a manhole and shut down the whole works. Now, thanks to Joel’s two-valve rebuild, we can turn off half the system while we fix a problem. And the valves are in secure boxes near the source, above ground. What a deal!

The garden’s operating costs are covered by its plot fees, $30 annually, but many gardeners over the years have given extra donations. This, and only this, is why we had the reserve money to pay for this large job. We have no city funds, no council funds, no grant money. It is all us.

So, all those gifts, small and large, added up to make this possible. We are so lucky to be part of such a community, people who understand that we are all in this together.

Sue Conner has been a gardener in the SAP Community Garden since around 1983. She and Kristen Olson are now co-coordinators.