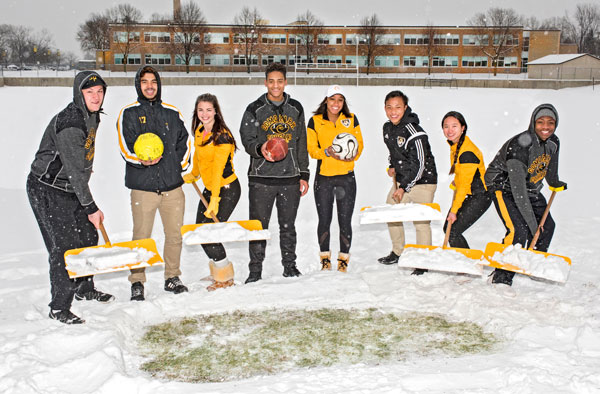 A field of dreams

Como Park Senior High School will host its homecoming football game this fall on its home field for the first time.

Thanks in part to a $250,000 grant from the Minnesota Vikings through the National Football League Foundation Grassroots Program, the installation of a multi-purpose synthetic turf field will replace the swampy grass field that was deemed unsuitable for varsity games. The new field will coincide with St. Paul Public School’s estimated $40 million remodel of the school, which will begin this summer.

Como varsity football home games have been played at rival school fields, primarily at Central’s Griffin Stadium, since the school opened in 1979. The new field, which will be located inside the existing track just west of the school building, will be lined for both football and soccer.

“It’s going to be exciting to have that environment and walk on the field and feel like this is ours,” said junior Cougars quarterback Robert Adams. “No more hopping on the bus to go to our ‘home game’.”

Come fall, Como’s soccer teams will have a full-size field and a reliable surface to play on, instead of the squishy ground east of the building where a small field was sandwiched between the baseball and softball diamonds. The only existing “amenities” for soccer were a few sets of three-row bleachers and a small portable scoreboard.

It was another example of a less-than-ideal setting, often criticized by visiting teams, coaches and parents. While the Como boys successfully won section championship games on that field in the 2012 and 2013 seasons, it wasn’t without a formal request by an opposing coach to move the game to a “neutral” turf field.

“Overall, the other students will have more pride to have our games right here in our own stadium. We, as a program, are very excited and thankful,” said Law Htoo, captain of the Cougars boys soccer team.

Girls soccer captain Emily Forstrom echoed Htoo’s sentiment. “I think homecoming will be a lot more meaningful and special to have our homecoming game at our own field instead of at our rival’s school,” Forstrom said. “Investment into the field shines more good publicity on Como and helps build a stronger community.”

The field will also be used for baseball and softball practice, ultimate Frisbee and in-school gym classes. In addition, community partners such as the St. Paul Blackhawks soccer club can rent the space for evening practices, without the risk of ripping up sod or causing wear and tear to the field.

Synthetic turf fields have become the norm for high schools across the nation as they can serve thousands of athletes and activities with minimal maintenance.

The Como community has longed for such a field. St. Paul Public Schools (SPPS) informed Como’s administration last year that their dirt-to-turf dream would become a reality more quickly if they could secure financial assistance; SPPS encouraged the school to apply for a National Football League (NFL) Grassroots Foundation Grant.

The competitive application required evidence of community support. A couple of Como teachers helped pull together letters from community leaders and stakeholders. The response was immediate: 17 letters accompanied the grant application.

Jay Schrader, president of the St. Anthony Park Community Foundation board of directors, wrote a letter explaining the foundation’s goal of nurturing community assets, including the schools.

“Our mission is to secure a strong and vibrant neighborhood for future generations, and our ongoing support for schools and children is a large part of that vision,” Schrader wrote. “An improved and upgraded athletic field at Como Park Senior High would benefit children across the community and allow many more events to occur in the neighborhood.”

David Lee, parent of three Como alumni, said the new field will “bring tons of energy to our campus” and would be “a symbol of the pride we take in our student athletes.”

Ann Commers, co-chair of the Como Booster Club, described how the field will also serve St. Paul Parks and Recreation and St. Paul Community Education programs. “With upgraded facilities, Como will finally be the gem of a high school that it was meant to be surrounded by the beautiful neighborhood in which it is located,” she wrote.

The Minnesota Vikings were impressed by the community’s support and engagement and recommended the proposal to the NFL office in New York.

“Here we have a beautiful new U.S. Bank Stadium,” said Brad Madson, the Vikings’ executive director of community relations, in a recent Pioneer Press interview, “and at Como High School there’s no home-field advantage for them as they’re playing their games offsite, so I think it was fitting we put our efforts behind helping Como get a new field.”

Remodel to begin this summer

The Como field is part of a 10-year, districtwide Facilities Master Plan (FMP) for SPPS, which includes the remodel at the school scheduled to begin this summer.

Improvements will include a new main entrance; a two-story, 21,000-square-foot classroom addition on the southwest corner of the building; reconfigurations throughout the building, including new locker bays, classrooms and bathrooms, flexible learning spaces and an extensively renovated open commons and cafeteria area. The heating, ventilation and air-conditioning system will also be updated.

A new entry to the high school is in the plans for Como’s remodel. This shows a preliminary design for the entry by Cuningham Group Architects.

Work will be done in segments and span over two years, with expected completion in fall 2019.

For Lumin Johnson, a junior who advocated for Como facility upgrades with a letter and by speaking to the SPPS school board, the investment in Como is a game-changer. “I think it will really make a positive difference in the future,” he said. “It’s fantastic that the school board decided to invest money into Como. It feels like they want us to succeed. It means quite a lot.”

To find out more about the district’s Facilities Master Plan, its timeline and projects for each site, go to www.spps.org/FMP.