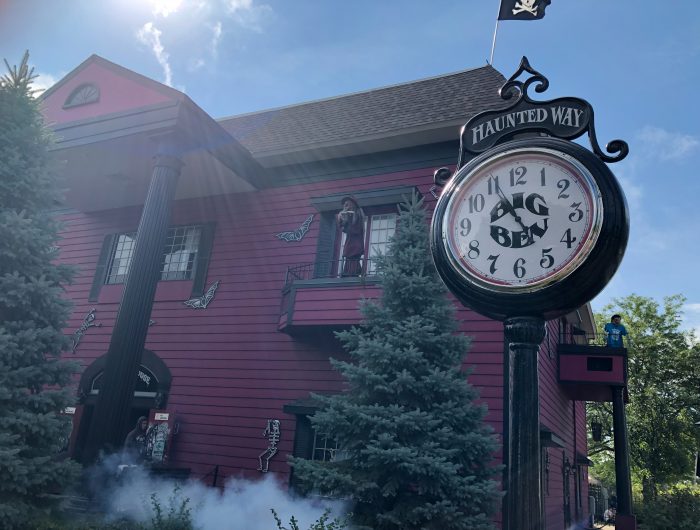 A frightful time at the Minnesota State Fair

For more than 35 years, Debbie Kohnen has considered her family’s amusement attraction at the Minnesota State Fair a success if it has frightened the daylights out of you.

“We love to scare people,” Kohnen said in all seriousness. “And some people get more scared than the kids.”

That’s just what you would expect to hear from a woman who has been a perennial ticket booth worker at the Haunted House since her father Robert Kohnen and a business partner bought the well-known attraction in 1984. This spring, Kohnen and her sister Michelle Lawrence inherited the business after their father died in April.

The two sisters, who grew up in the Como neighborhood just blocks from the Fair, said working at the Haunted House has been a “family thing” with many of the attraction’s key employees coming back to work year after year. Debbie said the Haunted House employs about 90 workers, who include actors who play various monsters and scary figures.

Michelle noted her children Nathan and Ceili also have worked with her at the Haunted House for several years since they became adults.

Debbie and Michelle are especially looking forward to this year’s State Fair after the 2020 Great Minnesota Get-Together was cancelled because of the Covid-19 pandemic.

“I think this will be a good year because people are looking to get out and do things again,” said Michelle, who also still lives in the Como area.

Meanwhile, Debbie expects that revenue from the 2021 State Fair should help recoup costs they had to expend to upgrade the Haunted House’s electrical system and new sprinkler system to meet city codes.

Although not enumerating a dollar figure, Debbie said the upgrade “was quite a bit of money.”

This year, the Haunted House will be open from 9 a.m. to 11 p.m. daily with admission $5 per person.

The Haunted House is just one of scores of attractions at the Fair, which runs from Aug. 26 to Sept. 6. For further information go to https://www.mnstatefair.org/updates.