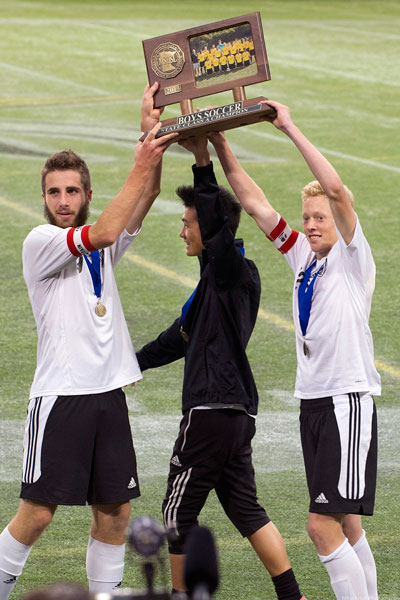 A hair-raising journey to the state championship

Captains Zach Lee, Yeng Yang and Will Kidd hoist the championship trophy at the end of Como Park’s Oct. 31 game against Hill-Murray at the Metrodome. (Photo by Mike Krivit, www.krivit.com)

After Zach Lee shaved his face on Aug. 11, the day before Como Park Senior High School’s soccer season began, he vowed to shave again only when his team lost a game.

The superstition of not shaving in sports competition until a team loses or is eliminated seemed to work for the Red Sox when they won the World Series in October. Apparently it worked for the Cougars too.

Lee’s face didn’t feel a razor until Halloween, the day the Como boys soccer team captured the Class A state championship with a score of 2-1 against Hill-Murray.

The win gave Como its first state title in a team sport since the school opened in 1979, something the now clean-shaven team captain describes as “pure joy and happiness.”

“I feel like I’m dreaming,” said Lee, a senior at the school. “It really hasn’t sunk in.”

Coach Eric Erickson describes it as a dream come true, not only for the team, but also for the rest of the student body, the staff, school community and alumni. He’s proud of the team for “giving all they had and for being a first-class team that loves playing for each other and for the school,” he said.

But win or lose that title, “I was going to be proud of these guys whenever their season ended,” Erickson said.

After the 2012 team’s conference championship, section championship and state tournament appearance, there were a lot of holes to fill this year, Erickson said.

“We graduated six starters (out of 11) and that included our three leading goal scorers and our goalie,” he said. “We then lost our captain and leader of our defense to an ACL injury that required surgery over the summer, which obviously meant he wouldn’t be playing this season either.”

“We switched some players into new positions to try and fill some of the holes,” he said, “namely [co-captain] Will Kidd who had been a midfielder for us for the previous two seasons. We moved him up to forward because we thought he could score goals with his skill and determination if he practiced there during the off-season and summer. He ran with the responsibility and showed everyone we’d be able to score goals. Then we addressed our midfield and defensive holes by switching some other player positions, and plugging in three of last season’s JV players right into our starting line-up, which is a great credit to our program and coaching at our lower levels.”

Once the team began playing, they surprised a lot of people with the early successes, Erickson said, “maybe even ourselves.”

“We were tested time and time again in the St. Paul City [Conference], which was extremely deep and talented this season,” Erickson said.

After winning two overtime games, Erickson said the team became more confident in the players’ abilities. “We were beginning to feel that we were as good as anyone else out there.”

Tor Will, the senior who scored the first goal in the Oct. 31 game, said the state championship wasn’t a total surprise.

“We had gone to state last year and we worked hard this year. We were confident we could do it if we worked.”

And they did, winning game after game, until the final one at the Metrodome on Halloween, when Seik Seik scored the second goal with 6 minutes left in the game. Though Hill-Murray secured one goal after that, the Como Cougars kept them at bay until the clock ran out.

Como’s first state team win was reported throughout the media, but Erickson—who has been coaching soccer at the school for 10 years and teaching AP government, AP economics and U.S. history there for 14 years—points out that Como’s gym “is filled with banners of St. Paul City championships, some section championships and state tournament appearances, both for individual participants and teams.”

“We have a wonderful athletic department that provides opportunities for all of our student-athletes and supports them and their efforts, regardless of their skill level, experience or records,” he said.

“High school athletics is about enhancing the educational experience of our students through athletic competition and commitment. We have promoted and supported that experience for over 30 years and are very proud of all Como’s student-athletes, past and present.”

Thanks to Mike Krivit for the use of his photos. See more Como soccer pics at, mikekrivitportraitsevents.zenfolio.com.