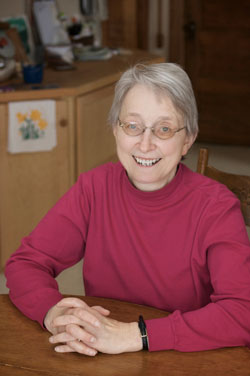 Mary Mergenthal was the Bugle’s editor in the 1980s. Photo by Lori Hamilton.

Like any loving grandma, St. Anthony Park resident Mary Mergenthal is always trying to find common ground with the younger generation. Happily, she and her 12-year-old grandson share an absorbing mutual interest.

They bond over the obituaries.

It may sound like a Charles Addams cartoon, but for Mergenthal, at least, it’s all business. A petite, blue-eyed woman who likes to serve her guests tea and scones in the manner of her Welsh ancestors, she is the editor of Lives Lived, the memorial section of the Park Bugle. Her job requires gathering death notices for anyone whose passing should be brought to the attention of the Bugle readership. It’s a painstaking job that calls for tact in her approaches to grieving relatives and dedication in the monitoring of church bulletins and several newspapers. Luckily, she has help.

When 12-year-old Jennings is in town for a visit, says Mergenthal, “He pre-screens the obituaries. ‘Hey, Grandma,’ he’ll say, ‘there’s a 102-year-old today.’”

As a 43-year resident of St. Anthony Park, Mergenthal was personally acquainted with many of the subjects of her final notices. She regards her work as “an odd—but by no means unhealthy—connection to the neighborhood.”

It’s far from her only connection to the area—or to the Bugle.

Aside from some time off in the 1990s, Mergenthal has worked for the paper in one capacity or another, virtually since it was founded in 1974. “I wrote occasional articles from the beginning,” she says. “In those days, the Bugle seemed like an old-time town crier put to print.”

In the 1980s, she became the Bugle editor, after editor Mollie Hoben left to start the Women’s Press. Mergenthal remembers those years with affection. There were the annual April Fools issues of the Park ‘Bungle,’ for example. The hoax photo she remembers best was taken by local photographer Jeff Rohr. “He lay on the ground and shot the light-green electrical housing on the boulevard just north of the bank,” she recalls. “We used the photo close up and said it was the model for a new high-rise going up in St. Anthony Park. That produced calls, let me tell you!”

She also remembers a couple of vivid letters to the editor. In one case, there was a heated exchange in print between a pair of dueling professors on the subject of liquor licenses. Back before Muffuletta cracked the liquor barrier, there had never been a restaurant in the neighborhood that served alcohol. One of the letter writers wanted to keep the neighborhood dry; the other advocated allowing a local restaurant to serve beer and wine. What Mergenthal knew—but didn’t reveal in print—was that the epistolary opponents were in-laws.

Another letter to the editor struck even closer to home. An influential local businesswoman was using the Bugle to promote a plan for an “all-white Christmas,” urging residents to abandon conventional colored outdoor Christmas lights in favor of trendy white lights. This rubbed at least one resident the wrong way, so much so that he took pen in hand.

“My husband, Jennings, wrote a strong letter,” says Mergenthal, “against conformity to other people’s standards.” Mergenthal published the letter without comment.

Perhaps her most indelible memory of her editorship came one summer when she was visiting friends in Wales. Mergenthal had left her assistant in charge, carefully listing all the stories in progress on a whiteboard that was set up in the Bugle’s old offices above the Hampton Park Co-op on Raymond Avenue. When her daughter joined her in Europe, Mergenthal greeted young Rebekah with a perfunctory, “How are things at the Bugle?” Beka gasped, “I’m not supposed to tell.”

Mergenthal was calm, insisting that all her instructions had been left on the whiteboard. “I don’t think there’s a whiteboard anymore,” was the response, and that was how she learned that the Bugle office had burned down in her absence.

Office manager Kathy Magnuson had managed to rescue most of the files, but Mergenthal had other reasons to decide on a career change at that point. A few years earlier, in the winter of 1986, she had suffered a parent’s worst tragedy when her daughter Naomi was killed in an auto accident. Mergenthal was left in a coma in the same incident and underwent weeks of recovery from brain injuries afterward.

When the opportunity arose to buy the oldest continually published Welsh newspaper in America, Mergenthal decided it was time to reinforce her ties with her heritage. The daughter of a Welsh immigrant father who farmed in southern Minnesota, Mergenthal was raised on annual expeditions to the all-important Gymanfa Ganu, the traditional hymn-singing meetings where the Welsh express their ethnic pride in sturdy four-part harmony.

“Gymanfa was the only time my dad would get a substitute to milk the cows,” she says. Merganthal published Y Drych (The Mirror—pronounced Ah-Dreekh) out of her basement for nearly a decade, finally selling it in 2001, a few years before the death of her husband from a long illness.

It was at the funeral of Ann Bulger, the Bugle’s previous obituary editor, that Mergenthal realized she was the right person to take over Lives Lived. “None of the current writers knew anything more [about the people of the area] than I did,” she explains.

From her unique vantage point on the past and present of St. Anthony Park, Mergenthal has seen a lot of change over the years. “St. Anthony Park was much more conservative—both socially and politically”—in 1968, when she moved to the neighborhood, she says. Mergenthal well remembers when the area elected one of its first Democratic legislators in modern times.

Although the Legislature was officially nonpartisan in those days, representatives identified with either the DFL or the Conservative Caucus. DFL-er Neil Dieterich won the State House race in 1972 by defeating a previous incumbent, Jack Morris, who just happened to be Mergenthal’s brother. “The neighborhood was really shocked,” Mergenthal recalls.

In more recent times, she says, “Neighborhoods [like St. Anthony Park] have become less provincial. Small businesses have closed. We drive to the ’burbs for groceries, schools. We’re more integrated with the city, the state and the world.”

That’s the upside. The downside, according to Mergenthal, “People don’t know their neighbors so well.”

It’s that sense of increasing anonymity that Mergenthal tries to combat in her work. It’s one of the secrets to a good obituary, she says. “Have some of their real life in it. Something about what they liked, what they said, how they got married.”