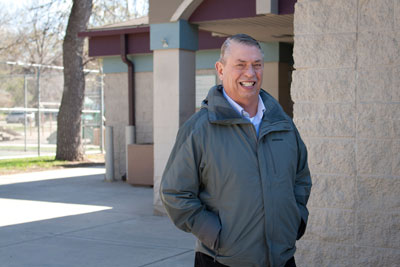 A lifetime of good memories

“You must know that there is nothing higher and stronger and more wholesome and good for life in the future than some good memory, especially a memory of childhood, of home.”

So says Fyodor Dostoyevsky in The Brothers Karamazov. This year’s recipient of the St. Anthony Park Community Foundation’s Spirit of the Park Award, Bruce Perrizo, helped give a generation of St. Anthony Park kids a lifetime of good memories as the playground director at Langford Park for nearly a decade, beginning 50 years ago this May 2.

The Spirit of the Park Award was established in 2007 to honor those who have demonstrated extraordinary dedication to the St. Anthony Park community. Awards are presented each year at the Fourth in the Park festivities at Langford Park on July 4.

For hundreds of families and kids, operating for nine years out of a 20-by-40-foot building known affectionately as “the Shanty,” Perrizo ran a recreation program that was truly communitywide: part athletic, part social, sometimes highly structured, often deliberately softly structured “kid run,” Perrizo might say. But always—five days a week, 52 weeks a year—active and engaging, and for the kids of the 1960s, their home away from home.

Picture a typical July 6 in the mid-1960s at “The Park” as Langford was called. The old Shanty, sitting in the south end of the horseshoe in front of the train tracks is the scene of organized energy. Perhaps 40 to 70 bicycles are parked by the tetherball pole, many of the smaller bikes still festooned with red-white-and-blue crepe paper and streamers from the July 4 parade two days before. Most of the bikes have ball gloves hanging from the handlebars. The younger kids are at the park for T-ball or intramural baseball and softball practice. The older kids are playing in the daily pick-up softball game, multi-age, softly organized by Perrizo (who will play some, fashionably attired in athletic glasses and Bermuda shorts, with the occasional clashing boxer short protruding).

Younger kids will learn from the older kids, the older kids will learn about being role models, and memories will be created. Dave will become Manny (and still is to this day) because Blur thought that he swung a softball bat like Manny Mota, and Head, Horse, Beak and T.H.E. Kid (self-named, did not last) will agree. And Perrizo, no printable nickname, will concur.

Perrizo’s Langford was a place where Title IX lived long before it was the law of the land. Girls’ sports was a full component of Langford Park. When asked why years later, Perrizo begins a longer response by stating quite bluntly, “They were our best athletes.”

In the winter, ice (not just a hockey rink, but a general skating rink used by dozens of people daily) became the focus. Jack Pearson, Dick Holmsten, Bill Paist, Stu Peterson and the late Trygg Hansen were several of many cited by Perrizo as people whose contributions were crucial. For many of those who grew up skating on that ice, a road trip to Albert Lea to play hockey is among their cherished memories of childhood.

They didn’t call it the Baby Boom for nothing. In the 1960s, St. Anthony Park Elementary School had two classes per grade composed of students who walked to school (and home for lunch). Nearby, Corpus Christi school was doing so well that it hired Perrizo to teach a morning physical education class for a decade.

The program at Langford Park was outgrowing the Shanty. Many will remember moving the football, baseball and softball gear and uniforms in and out of the basements and garages of the Comstock and Johnson homes, to name only two families who volunteered more than just time to Perrizo and the park. Working behind the scenes (he was a city employee, after all), Perrizo assisted as Paul Savage and other neighborhood leaders navigated the city government maze and successfully secured funding for the first of the two “new” buildings at Langford. Denny Grebner designed the building, which included a gym and made possible onsite basketball and volleyball. It opened in the early 1970s, near the end of Perrizo’s tenure there.

But lack of a building had not stopped Perrizo from expanding the program in the 1960s. Working with Genevieve Nelson at St. Anthony Park Elementary School, Perrizo created an active after-school program at the grade school. Some Langford activities were moved to the gym at Murray High School’s new building. That’s where Perrizo met his wife, Pat, who was teaching at Murray.

Perrizo also managed to use the old Luther Seminary gym for park programs. Summer programs sprawled from Langford to Murray Field and often to the Seminary field. In the last decade before car air conditioning became standard, Perrizo’s open-windowed, left-handed wave over the roof following only one brief toot of the horn as he was driving from site to site became his signature mark.

Life moves on, and Perrizo moved on to a successful career in the St. Paul Parks and Recreation Department as a district supervisor. Langford Park and the Fourth in the Park festivities were frequent parts of his work life as he oversaw the Northwest District and regularly worked the Fourth.

At this year’s July 4 celebration, Perrizo will serve as grand marshal in the parade down Como Avenue and will be honored at the bandstand at Langford Park during the opening ceremonies. A special reunion gathering for all of the “Park Kids” of the 1960s, 1970s and beyond is the theme of this year’s event. Friends of Perrizo are invited to greet him from 1 to 4 p.m. at a special “Perrizo’s Palace” tent to be located by the horseshoe pits.

Roy Magnuson is a teacher and coach at Como Park Senior High School and one of many of “Bruce’s kids.”