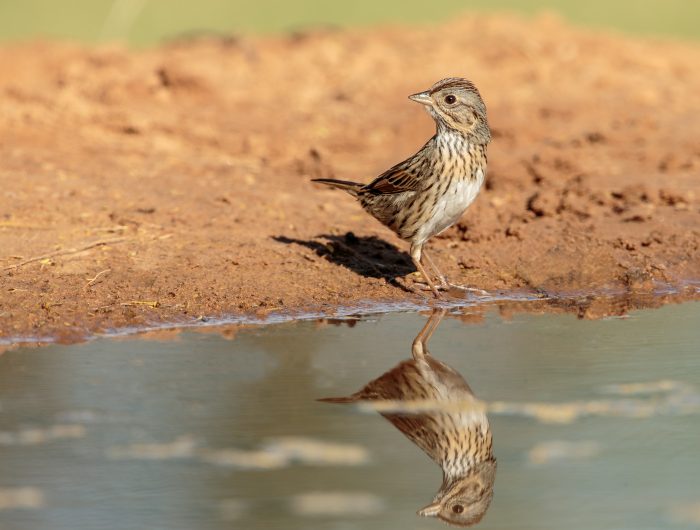 A look at the Lincoln’s Sparrow 

I keep a couple of journals related to birding. When I retired more than 15 years ago, I started a journal titled “The Birds of Retirement,” using a hard cover 6″ x 8″, spiral bound book of about 80 pages.

I’m now on volume XIX. I record all the birds I see in my yard or from my yard. It’s useful in reminding me when I should start seeing returning migrants.

I always had the illusion that someday some future data analyst would discover these journals and do all kinds of correlations and analyses that would reveal some secrets of bird life and resolve long-standing mysteries.

Once, when my daughter was visiting, I was making an entry in my journal. I told her that I expected when I was gone, she would carefully review each of these volumes and pull out the nuggets that would validate my efforts. She assured me (rather sarcastically, I thought) that it would be a high priority for her.

I also began a life list in 1987 in a journal titled “Bird Watcher’s Life List & Diary.” It was to that volume I turned to find out when I’d first seen a Lincoln’s sparrow. It was in August 1987 at the Eloise Butler Wildflower Garden in Minneapolis.

And they’re a difficult bird to find, get a good look and identify. Back then, I was very much a beginning birder. Was I with anyone who could have confirmed my identification?

Then I found, in a volume of Life “Histories of North American Birds,” that included sparrows, that on the fall migration, Lincoln’s sparrows were seen in Minneapolis-St. Paul on average around August 17. So, I felt a little more confident of my first sighting in August 1987.

The Lincoln’s sparrow was first identified on John James Audubon’s 1834 trip through Labrador. The group came upon a bird that was singing very sweetly. The sparrow’s song is compared to the bubbly song of the house wren, combined with that of the house finch. The travel party tried to find it, but it kept moving just ahead of them. Finally, one of Audubon’s young companions, Thomas Lincoln, got a good look at it and shot it (!), which is how birding was done back then.

Audubon named the bird “Tom’s Finch,” thinking it was in the finch family. It was later named “Lincoln’s sparrow,” as its family was more correctly decided. Audubon said of the bird, “We found more wildness in this species than in any other inhabiting the same country.”

The Lincoln’s sparrow is a very shy bird. The literature refers to it as being afraid of its own shadow.

It’s a small sparrow, even dainty, a little smaller than a house sparrow, mostly brown but with a buffy orangish wash on the chest. It has very narrow dark lines down the chest and sides. Sometimes those lines aggregate into a central spot on the chest. The buffy orange also comes down from either side of the beak in what are called malar stripes. It may raise the feathers on its crown when excited.

It usually migrates alone, but I’ve seen two or three of them at a time in my yard this spring. I’ve been seeing at least one Lincoln’s daily for seven days in a row. I misidentified them at first as song sparrows, because of the streaky chest and central spot, but one of my field guides (Pete Dunne’s Essential Field Guide Companion) points out that the song sparrow’s streaks look blurry and rather amateurishly applied. The Lincoln’s sparrow overall is “neater, trimmer and less gangly looking than the song sparrow (which looks more like a bumpkin by comparison).”

I’ve been very fortunate to see Lincoln’s sparrow in my yard. The Lincoln’s usually favors shrub cover, and mated pairs nest on the ground in marshy places. It’s very secretive in nature, to the extent that much of its biology remains poorly documented. In fact, when she leaves her nest, the female sometimes does what’s called a “rodent-run,” where she pins her wings to her sides, ducks her head, and runs through the underbrush for three or four meters.

Lincoln’s sparrows come through twice a year on migration. They often arrive about the same time as white-throated and white-crowned sparrows, so if you see those more colorful sparrows, look around for Lincoln’s. And with the above description, you’ll be confident when you enter your sightings in your birding journal.