A mob of crows 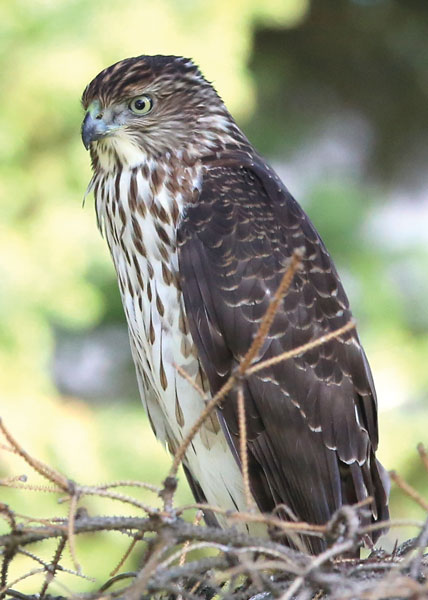 As I started out on our morning walk with Chance, our cocker spaniel, it looked like the rain that was forecasted might begin at any minute.

Suddenly a large flock of crows arose noisily from a block or so to the east and headed in our direction. They were chasing something and squawking about it.

They had alighted in the top of a tree near Lauderdale City Hall, less than a block from where Chance and I stood. The tree had a lot of bare branches that extended above the main foliage and in those branches were 25 or 30 crows cawing, all very agitated.

So of course, Chance and I headed over to see what the crows were so loudly protesting.

More crows were coming from the distance to join this raucous group. With the gloomy mist in the air, it reminded me of a scene from Hitchcock. Don’t get me wrong, I like crows, but a mob can be pretty intimidating.

Crows will often gather together to mob a predator. One of the purposes of mobbing is to drive the predator out of their neighborhood. Other crows join to lend their voices, but also probably to learn where the threat is and keep an eye on it.

Crows aren’t the only birds that mob a predator. Sometimes we’ll see a mixed flock of smaller birds: chickadees, downy woodpeckers, and white-breasted nuthatches. And they’re scolding, often a smaller owl, perhaps a screech owl or saw-whet owl. They don’t usually take on a larger predator.

Often the target of a mob of crows is a great horned owl, the night-time scourge of roosting crows. It’s said that a great horned owl can swoop through a sleeping flock of crows and pick one off without the crow next to it knowing what happened.

Interestingly, there’s a hierarchy for where crows perch in the nightly roost. The older crows get the safest spots toward the center of the roost tree. Younger crows are left to take up roosts toward the outside of the tree. That makes them more liable to a predator attack. In exchange, the older crows help the younger ones find potential foraging sites the next morning.

My theory is that crows mob an owl in order to keep it awake during the day so it can’t harass them at night.

I searched the trees for the large, rounded shape of an owl, but didn’t see any owl-like shapes.

We stood and watched for a while. Occasionally a crow would leave its perch and dive toward a part of a nearby tree, but I couldn’t see any actual target.

Then, from the east, the same area from which the crow mob had arrived, came a single bird, flapping strongly toward the tree of crows. It was a Cooper’s hawk!

Suddenly, the whole flock of crows erupted in caws and disbursed to the west. What precipitated such a hasty retreat from one incoming hawk? And what had led the hawk to challenge so many crows?

Chance and I continued our walk. Within a few minutes, I saw the adult Cooper’s head back to the east.

Here’s my theory: A few mornings earlier, Chance and I had been over a block or two to the east and heard the soft kek, kek, kek of a young Cooper’s hawk begging its parents. Neighbors in the area had pointed out a Cooper’s nest to me earlier this summer.

I surmise that the crows had found this young hawk and decided to harass it. One or more crows spotted it, raised the alarm, and were joined by every crow that heard the “caw.” The hawk was driven out of its nest tree and headed west, stopping after a few blocks at the cluster of trees where the flock of crows took up their mobbing in earnest.

After sufficient time passed to let the youngster learn from the situation, Mom or Dad Cooper’s figured enough was enough and headed over to bust up the party. But why did the whole flock of crows bail at the appearance of one adult Cooper’s?

It turns out that Cooper’s hawks prey on crow nestlings. And as I think back, I have seen a Cooper’s hawk flying away with a crow nestling in its talons, being pursued at a distance by an adult crow, a poignant reminder of nature, red in tooth and claw.

A full grown Cooper’s hawk is about the same size as a crow, so maybe no one member of the flock felt like taking it on. Harassing a perched predator as a group is one thing, but if that same hawk is coming at you with talons raised and beak open, maybe not.

I wonder what that parent Cooper’s told the youngster. Maybe congratulated it on surviving the mob!

Clay Christensen lives and writes in Lauderdale. His book “The Birdman of Lauderdale” is available in Twin Cities-area Half Price Books stores.