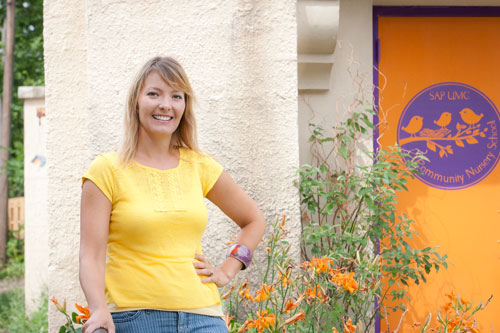 Later, she took dance lessons at the St. Anthony School of Dance run by Sarah Quie, which for a year was located at the church. It’s as if that old building on the corner of Knapp Street and Hillside Avenue keeps calling to her. But when the board of the directors contacted her about running the preschool, it was not a clear-cut choice.

Breen had already found success teaching music to children at St. Anthony Park Lutheran Church and in her own secular music company, Orchard Musik. Leaving that life behind was not appealing at first.

“I felt a loyalty to my Orchard Musik families,” she said. “I had seen those kids grow up and now there were younger siblings waiting to take my classes.”

The classes were hugely popular with both children and their parents. Breen mesmerized fussy babies with German lullabies and colorful shakers, and parents of older children developed lasting friendships while waiting on hand-me-down couches in the church’s youth room.

Unintentionally, Breen had become an integral part of the very fabric of the community she cherished. But the classes were so sought after, she found herself needing to expand to meet demand.

“At some point, it became decision time,” she said. “Do I get my own studio to continue to grow the music school, or take the job with the preschool?”

She chose to enter a new chapter. Running the secular preschool program housed at the United Methodist Church (UMC) has been both challenging and rewarding.

Keeping the UMC mission integral to the secular preschool is also an important challenge for Breen, but one she is happy to accept.

“I’m extremely grateful to the UMC for their continued support of the 50-plus-year-old preschool program that is a valuable resource for the community,” she said. The first year under Breen’s direction was a year of transition, but last year the school already had a waiting list.

Now entering her third year at the helm, Breen is proud of the excellent referrals they get from current families, which she attributes to her teachers, Julie Lee and Nate Hamilton.

“With a team like that, I couldn’t fail,” she said. The feeling, apparently, is mutual. “Molly is a shining light,” Hamilton said about his director. “I have had the great privilege of getting to know so many nice families from the [St. Anthony Park] neighborhood. It is a lively and beautiful little community.”

The school’s location at the heart of St. Anthony Park is something the staff takes full advantage of. The kids make trips to the local Post Office to mail themselves a letter, the library to look at books, and even to Tim and Tom’s Speedy Market for a lesson on produce. And while Langford Park is an invaluable perk, the school is adding an outdoor space as part of a five-year plan.

“We are really excited about building a multisensory experience outside for the kids,” Breen said. The year-round outdoor learning environment will be located directly behind the church on Knapp near the entrance to the preschool. With the help of school families and community members like Swenson’s Workshop, the outdoor area is set to open this fall.

“This space will be an extension of the classroom,” Breen explained. “The community and school families have been incredibly supportive with this effort, even donating tree stumps to use as tables.”

But the vision for improving the school doesn’t end there. In 2014, they hope to add an afternoon program as well. The program will have a complementary, not identical, curriculum to the morning program.

“Many families don’t have the luxury of sending their children to a two-and-a-half-hour preschool program. Working parents need a full-day program but may want more of an educational setting than a daycare might be able to provide,” Breen said. “Our continued challenge is to provide a high-quality early childhood educational experience and still make it affordable. Access is very important to both UMC and the school.”

In that vein, the school is also working on a scholarship program to make it even more accessible for families throughout the community and beyond. But Breen isn’t resting on her laurels quite yet.

“I am trying to hone in on what my vocational purpose is. I want to take all my different experiences and make them into something meaningful for me and the families I serve,” she said. “It’s all about meeting the needs of the community.”

Alex Lodner is a freelance writer who lives in the Como Park neighborhood. Alex has written for Minnesota Monthly, Taste, the Northern Traveler, TCJewFolk and more. This is her first article for the Park Bugle.