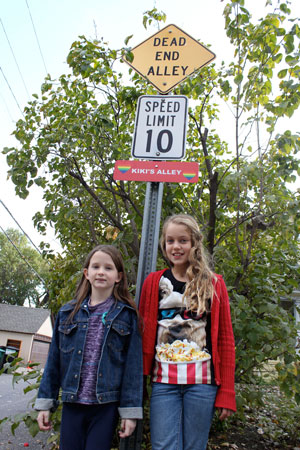 Maggie Fuller (left) and Maddie Thompson and the sign they created to honor their neighbor, Kiki Gore. (Photo by Kristal Leebrick)

Kiki Gore calls the dead-end alley behind her house on Raymond Avenue in St. Anthony Park “the best alley in the world.”

The neighbors who share the alley call it “Kiki’s Alley.”

That moniker became official (somewhat) thanks to Maggie Fuller and Maddie Thompson, who created a red sign decorated with rainbow hearts declaring that the paved path that connects that block’s residents to each other as Kiki’s Alley.

The story began at Colossal Café on Como Avenue, where Maggie, a fourth-grader at St. Anthony Park Elementary School, and her family took her dad, Tim Fuller, for a summer birthday celebration. At Colossal, customers order their food at the cash register and then are given signs to place on their tables so servers know where to bring the food. The signs look like street signs and bear the names of many of the streets in St. Anthony Park.

Maggie asked her mom, Rita Goodrich, if alleys had names. Her mom said she didn’t think so, then asked Maggie if she were to name the alley behind their house, what would it be. Kiki’s Alley, of course.

“She’s the ruler of the alley, in the nicest way possible,” said Maddie Thompson, a sixth-grader at Murray Middle School, who lives on the alley across from Gore.

The two girls teamed up, found a website where they could create a metal sign and went to work figuring out how to design it to reflect Gore’s personality.

“We didn’t want Kiki to know,” Maggie said, “so we pretended we were doing a math survey. We did a bar graph and asked her (about) her favorite color. She said red. We put in hearts and rainbows because Kiki loves people and she’s like a rainbow.”

“She’s like everything,” Maddie said, “and she’s so loving.”

The girls kept the sign a secret and presented it to Gore at what the two schemers told her was “just a regular potluck party.”

“I was blown away,” said Gore, who has known most of the children on that alley since they were infants. The alley sign is “just another example of how service-oriented” her neighbor kids are, she said. They are always willing to help, even when they aren’t asked; if they see her bringing groceries into the house or taking out her recycling, they run over to do the heavy lifting.

Gore declined to be in the photo for this article because, she said, this story is about the girls not her.

“Boy, have they been raised by parents who understand service,” Gore said. “I happen to be the target this week. Someone else will be next.”

Gore has lived on the alley for four decades. “Everyone should live on my alley,” she said, “but there are no vacancies.”