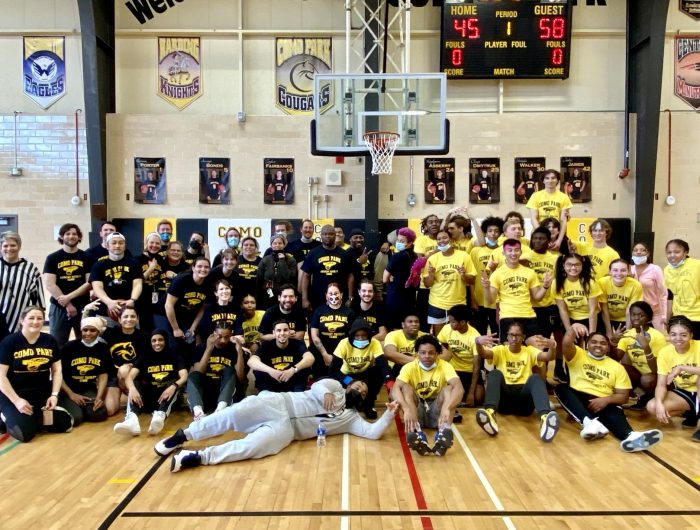 A special year for Como athletics

The 2021-2022 school year at Como Park High School restored both a full academic calendar of in-person learning and a complete athletic department schedule. With fans back in the stands, the Cougars gave the school community plenty of reasons to cheer.

Here’s a recap of highlights from a memorable and historic year for Como Park teams and student athletes:

Homecoming – The return of fans in the fall of 2021 made Como’s homecoming football game a great opportunity for celebration. The Cougars took full advantage of a spectacular, sunny September day on the Como turf to defeat city rival Johnson by a score of 22-6.

Allianz Field – An estimated 2,000 fans witnessed the first-ever high school soccer games played at Allianz Field, the home stadium of Minnesota United. The annual Mayor’s Cup matches between Como and Humboldt served as a showcase of St. Paul City soccer and a celebration of each school’s boys and girls programs.

On a warm October Friday night, the Como girls won 1-0 in the first game of the doubleheader. In the nightcap, an evenly played match concluded with Humboldt winning in a dramatic penalty-kick shootout.

Cross Country to state meet – For the first time since 1981, the boys team qualified for the state meet. Out of 75 runners in the section 4AA meet in late October, the Cougars first five finishers all crossed the line in the top 20 to convincingly take the title. In addition to the team trophy, junior Charlie Power-Theisen finished as the first-place individual at the section meet.

Swimmers to state meet – For the first time since 1991, the Cougar boys swimming team won the St. Paul City Conference Championship. At the section 4A meet, the Como boys finished in third place out of 12 teams with seven swimmers qualifying for state in relays and individual events.

Wrestler to state – The Cougars had a strong showing in the section 4AA meet with four wrestlers advancing to the semifinals and earning medals. In the 285 lb. weight class, Como senior Aaron Adekplovi won every match to earn the section championship and qualify for the state meet.

In early March at the Xcel Energy Center, Adekplovi won his opening match on the big stage. After losing in the quarterfinals, he won two more matches in the wrestleback rounds to earn a state sixth place medal.

Boys basketball rises – A remarkable group of seniors showed how important it is to stick together through tough times. After winning two games total during the previous two seasons, Donovan Clinton and Amir Plair asserted themselves as scorers while role players found their groove, resulting in a remarkable turnaround.

The Cougars compiled a 10-2 record in the St. Paul City Conference to earn second place. Their overall record was 16-10 and included an impressive victory over Simley in the section 4AAA quarterfinals.

Girls basketball to state – Beyond winning every St. Paul City Conference and Twin Cities Championship game since 2015, the Cougars’ goal was to reach the state tournament.

The talented starting line-up of seniors Ronnie Porter, Kaylynn Asberry, Jada James, Shakyla Walker and Cloey Dmytruk helped the Cougars accomplish their goal in dramatic fashion with a 75-72 victory over DeLaSalle in the section 4AAA championship game at Como.

At state, the girls’ quarterfinal win over Grand Rapids led to a televised game from Williams Arena in the semifinals versus Totino-Grace. The result was not in Como’s favor. But the girls bounced back with an outstanding performance in the state’s third place game, defeating Mankato East to end the historic season on a high note.

Seniors vs. Staff game – After a two-year hiatus due to the pandemic, the annual “Seniors vs. Staff” basketball game was highly anticipated by the Como student body. In a “tradition like no other,” students pack the gym to end the last day of school before spring break in order to see Como staff members try to take on younger, more athletic members of the senior class.

Predictably, the class of 2022 came through with a comfortable victory. The seniors had the perfect blend of skill and spirit, making it a fun event for everyone — symbolic of the collective effort that produced such a special year for Como Park Athletics.