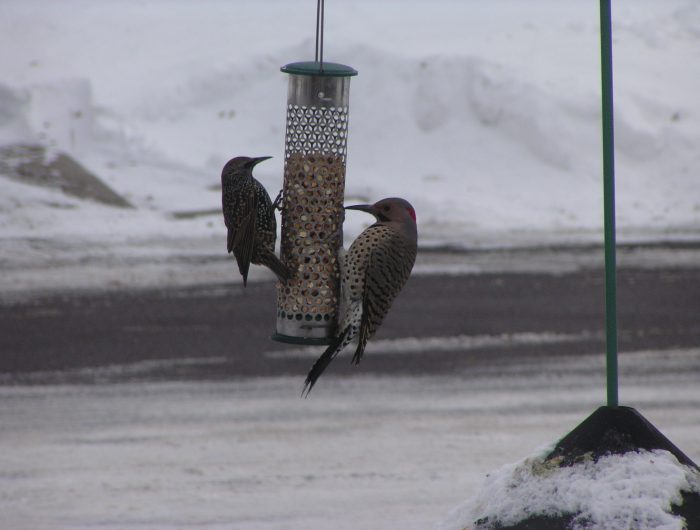 A view of the European Starling 

I used to work at the National Marrow Donor Program (now called Be The Match) as a programmer/systems analyst. One benefit of working there was the opportunity to serve as a courier for bone marrow transportation.

After doing several trips within the United States, you could be considered for an international trip. I was fortunate enough to be chosen for a delivery of marrow to a patient in Italy.

My destination was Reggio di Calabria at the tip of the boot of Italy. I stayed in Villa San Giovanni, just north of my delivery point.

At the hotel, I asked the manager at the desk if there was anyone who might be willing to take me around the area the next day, so I could get familiar with the region. She said she’d check with her staff.

She returned while I was eating supper to tell me that they had a young girl who was studying English and would be willing to guide me around the area the next morning.

I met Ms. Spinelli early the next morning and she led me outside to meet her father, who would be driving the car for the tour. We stopped in a neighboring town for a shot of espresso (I was not impressed, especially with the tiny amount in the cup!). Then we headed up the coast to Scilla, a town built on a cliff with narrow streets. Very picturesque.

Next, we turned inland to a property that Mr. Spinelli owned where he grew grapes and had a villa. As we were looking over the land, a flock of starlings flew past. I said, “Starlings!”

Mr. Spinelli said, “Sturnus vulgaris.” (He didn’t say it in italics. I added those.)

“Wow!” I thought. “This guy knows the Latin names of the birds! He must be a birder!” It took a while to dawn on me Italy was the home of the Latin language and what he was calling the bird was what the bird was called in Italy! Travel is truly broadening, isn’t it?

European starlings were introduced to into New York in 1890, by the American Acclimatization Society, whose goal was to establish in the United States every bird mentioned in Shakespeare.

In “Henry IV,” Hotspur proclaims that he’ll have a starling trained to speak nothing but “Mortimer.” I’m going to have to start listening for that when I’m around a flock of starlings.

Starlings first arrived in Fillmore County, in southeastern Minnesota, in 1929. I wrote about them several months ago, how they aggressively tried to get at a caged canary in a farmhouse window. Nice birds! Welcome to Minnesota!

The literature is unclear on how many starlings were brought to New York. Depending on the account, it was either 60 or 120 birds. By now, it’s estimated there are more than 200,000 starlings in the United States.

My neighbor Rachel got me thinking about starling migration. She said they’d been having flocks of starlings at their backyard feeders for quite a while, until one day, there weren’t any at all. Her mother, who lives with them, was delighted.

“Do starlings migrate?” Rachel asked me. I said I’d investigate, and this column is partially the result.

My copy of “Birds in Minnesota” lists European starlings as a permanent resident, but also as a regular migrant. So, you can take your pick. Usually, winter migrants are short distance migrants, just moving a short way from their usual base. My “Birder’s Handbook” says that although starlings are residents in winter, many tend to wander south.

Starlings have some unique features to look for. The jaw muscles for the bill work opposite of the usual bird. Instead of clamping tighter, they spring the bill open.

I get a kick out of watching starlings trying to get a peanut out of my peanut feeder. The woodpeckers whack at the nut they’re after, but the starlings have to “spring” around trying to knock a nut loose.

And apparently, their eyes move forward toward each other when they spring their beak, giving them binocular vision. They’re particularly good at foraging in short grass or in a light snowfall, just stick in the bill and spring it open.

Starlings are cavity nesters, in competition with bluebirds, woodpeckers, nuthatches and others. They build a nest inside the cavity, while many other cavity nesters just cover the bottom of the cavity with wood chips. Starlings also add green vegetation that acts as a fumigant, to keep down the lice and mites.

They are very meticulous about removing the fecal sacks from their nestlings… at first. Later, they reduce the removal, and the waste builds up. Apparently, the nestlings can handle the foulness. It makes the nest less attractive for a competitor.

Maybe that’s where they get the vulgaris in their name?