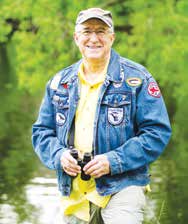 A visit from some winter crows

From my kitchen table, I can look out onto my front yard where we have all of our bird feeders and can see any variety of birds. Besides feeders suspended from the roof overhang, I’ve got a suet feeder on a shepherd’s crook pole and a wooden platform feeder on another pole.

The platform feeder is a fly-through design, basically a large, rectangular feeder tray with a roof supported by a post at each corner. It allows the birds to keep an eye on what’s happening around them while they feed. And gives them some shelter from snow and rain at the same time. And, if necessary, they can exit in any direction.

I was recently sitting at my table, staring into the yard, wondering what I should write about for this column, when a crow flew in and perched on top of the platform feeder. I always chuckle when I see a crow on top of that feeder, because they don’t fit under the roof very well. They have to hunch over to get onto the seed tray. In fact, sometimes the crow sits on the roof, peering over the side and can’t figure out how to get from the roof to the tray!

I hadn’t even worked up a good chuckle when a second crow flew in and perched next to the first one on the roof. This could get interesting.

But these were apparently experienced birds. They immediately hopped off the roof, turned in mid-air and landed on the seed tray right next to each other. They’d done this before.

A single crow can pretty well fill up my platform feeder. Two crows pack it completely. No other bird’s going to get a shot at any seeds. And most other birds wouldn’t try to compete with crows.

But here came a third crow to perch on the top of the feeder. And then a fourth crow that opted for a spot in the snow below the feeder! So, there were two crows in the feeder, one on top and another crow on the ground.

Something spooked this last crow in the snow and it took off. That affected crow number three and it left as well. With the party breaking up, the two crows inside the feeder bailed too, and the yard was once again crow free. I was glad they didn’t stay too long because crows can quickly go through a lot of bird seed.

I got to thinking about this small flock of crows. They may have been a family group. Young crows often stay with their parents for a year or more, learning crow things, like where to find food, what’s edible, where to seek shelter from bad weather, where to roost at night and helping to raise the next brood.

I think the first two crows were acting like the parents, the last two like the youngsters. Family groups tend to stay together and it’s these groups that gather into the larger roosts that we see in the winter.

Some years I’ve seen crows heading to their roosting sites. They usually head out late on a winter afternoon, in groups ranging from five or 10 birds to 25 or more. They’re all flying in the same general direction. From our neighborhood in Lauderdale, they head off to the southwest, most likely to a city park in Minneapolis.

Besides watching crows, I listen to them. When they’re mobbing a hawk or an owl, their loud calls invite other crows to come over and help get rid of the intruding predator. I try to find out where they are, so I can see the target of their wrath.

I listen to other crow calls in hopes of learning what they might mean. Crow “talk” fascinates me. I often count the “caws” to see if I can match any behavior to a specific count. So far, I haven’t figured anything out yet, but it’s a fascinating puzzle to work on.

One vocalization that stumped me the first several times I heard it was the rattle call. This sounds like an old-time wooden noise maker in which a geared wheel clacks a wooden reed as it’s turned. I’ve heard that it’s a parent talking to a youngster. It’s done very softly when they’re on the nest, sort of a reassuring contact call. But it can get louder, perhaps as the Mom needs to get the kid’s attention.

I enjoy studying and learning about crows all year long. But especially, in winter, they’re among the largest birds around, very visible on the landscape and in the air. I find their intelligence just fascinating, and their antics very entertaining as I sit at my perch at the kitchen table!

Clay Christensen lives and writes in Lauderdale. Photo of Clay by Chase Vanderbilt.